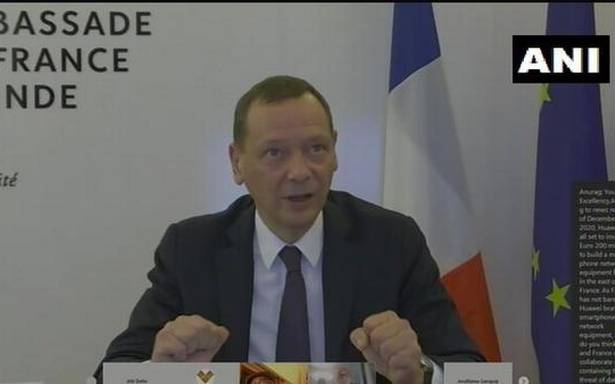 China should work in the same framework as others, says Emmanuel Bonne

A day after the Chinese Ambassador in India objected to the outgoing U.S. Ambassador’s comments on the India-China stand-off, a senior French diplomat said that “when China breaks rules, we have to be very robust and very clear”, while saying that when it came to direct threats to India, France had always been supportive on Kashmir at the United Nations Security Council and did “not let the Chinese play any procedural games”.

“Let us not go for confrontation — it’s much easier to say this from Paris, [than] from Delhi when you almost have a problem in the Himalayas and when you have Pakistan at your border. And I mean on direct threats to India, we have always been very clear. Whether on Kashmir we have been very supportive of India in the Security Council, we have not let the Chinese play any kind of procedural games,” said Emmanuel Bonne, Diplomatic Advisor to the French President, speaking at a webinar organised by the Vivekananda International Foundation on Thursday.

Referring to the ongoing stand-off in eastern Ladakh, he said that when it came to the Himalayas, the statement had been “perfectly clear”. “What we say publicly, we say to the Chinese also privately. We need to be robust…” Mr. Bonne said.

Mr. Bonne was in India for the 3rd India-France strategic dialogue led by National Security Advisor Ajit Doval from the Indian side. On the dialogue, he said they had discussed strategic opportunities, defence and security relationship, which meant equipment and also military cooperation, in particular in the Indian Ocean region information sharing.

Mr. Bonne thanked India for its support recently in “countering disinformation” from Turkey and Pakistan, and said that their relations with Pakistan were “at a historic low”. “We very much appreciate the support we got not only from your authorities but also from Indian civil society when our country was under attack by some leaders in Turkey and Pakistan and in other countries,” he said.

Saying that they wanted China to respect “certain rules, be less aggressive,” Mr. Bonne said China should work in the same framework as others and it was important for France to be more defensive, aggressive but also be more dynamic and nimble, and join forces.

Talking of India-France cooperation in the maritime domain, Mr. Bonne referred to the ongoing information exchange and asked India to play a greater role in the European Maritime Awareness in the Strait of Hormuz (EMASOH) initiative in Abu Dhabi. “We already have an Indian officer with us,” Mr. Bonne said, and added that if India could “bring some capacities such as a frigate or other Navy capacities…it will be a demonstration of convergence of our interest and capacity to operate together”.

Stating that France was aware of and shared India’s concerns on Djibouti, he said his country was also aware of concerns over Mozambique because of geopolitical and security reasons, and “the investments China is making in the region”. “In Djibouti, we are ready to share our facilities with you [India], we welcome your Navy in Djibouti,” Mr. Bonne added.

01/07/2021 World Comments Off on When China breaks rules, we have to be very robust and clear: French diplomat
TV & Movies