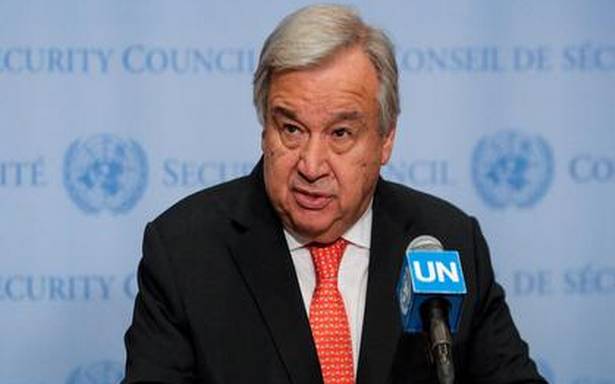 His message to all of them has been the same, both publicly and privately, that he remains very concerned about any potential escalation between India and Pakistan over the situation.

UN Secretary General Antonio Guterres, who has had contacts with the leadership in India and Pakistan, remains very concerned about any potential escalation between the two countries over Kashmir and appeals to both sides to deal with the issue through dialogue, his spokesperson said.

On Monday, Mr. Guterres also met with the Permanent Representative of Pakistan to the UN Maleeha Lodhi on her request over the Kashmir issue.

His message to all of them has been the same, both publicly and privately, that he remains very concerned about any potential escalation between India and Pakistan over the situation. He appeals to both sides to deal with the issue through dialogue, Mr. Dujarric said.

Mr. Dujarric was responding to a question on whether Mr. Guterres plans to mediate between India and Pakistan on Kashmir during the UN General Assembly session later this month which would be attended by both Mr. Modi and Pakistan Prime Minister Imran Khan.

You know, our position on mediation has, as a matter of principle, has always remained the same, Mr. Dujarric said.

His comments came as India and Pakistan clashed at the 42nd session of the United Nations Human Rights Council in Geneva over the Kashmir issue.

The UN chief has maintained that his good offices are available only if both sides ask for it. However, India has made it clear to the international community that the Kashmir issue is an internal matter and there is no need for a third-party mediation.

And, as was said by the High Commissioner for Human Rights recently, the situation in Kashmir can only be solved with the full respect of human rights, Mr. Dujarric said.

Pakistan downgraded its diplomatic relations with India and expelled the Indian High Commissioner following the revocation of Article 370 in Jammu & Kashmir on August 5.

India has categorically told the international community that the scrapping of Article 370 was an internal matter and also advised Pakistan to accept the reality.