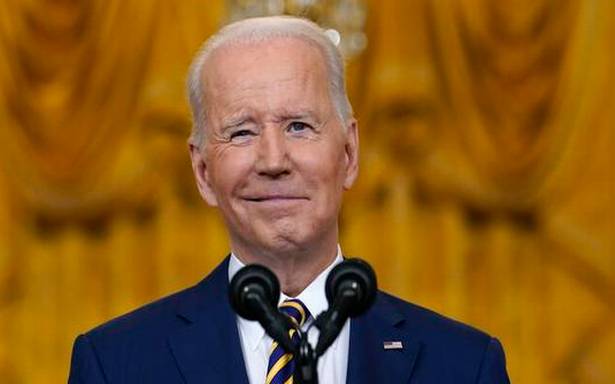 “I call it a job not yet finished. It will get better”, the President said

President Joe Biden has acknowledged that the pandemic has left Americans exhausted and demoralised but insisted at a news conference marking his first year in office that he has "outperformed" expectations in dealing with it.

He said on Wednesday that he would likely have to settle for "big chunks" of his signature economic package to break an impasse in Congress and further attack inflation and the pandemic.

Mr. Biden said he believes important parts of his agenda will be passed before the 2022 midterm elections and voters will back Democrats if they are fully informed — an assignment he said he will pursue by travelling the country.

The President began the news conference by reeling off early progress in fighting the virus and quick passage of an ambitious bipartisan roads-and-bridges infrastructure deal.

But his economic, voting rights, police reform and immigration agenda have all been thwarted in a barely Democratic-controlled Senate, while inflation has emerged as an economic threat to the nation and a political risk for Biden.

Despite his faltering approval numbers, Biden claimed to have "probably outperformed what anybody thought would happen" in a country still coping with the coronavirus.

"After almost two years of physical, emotional and psychological impact of this pandemic, for many of us, it’s been too much to bear," Mr. Biden said.

"Some people may call what’s happening now the new normal," he said. "I call it a job not yet finished. It will get better." Mr. Biden seemed to relish Wednesday’s encounter, extending what was expected to be an hour-long press conference to nearly two hours..

He fielded questions about inflation, Russia’s intentions with Ukraine, nuclear talks with Iran, voting rights, political division, Vice President Kamala Harris’ place on the 2024 ticket, trade with China and the competency of government.

On his nearly USD 2 trillion economic agenda that West Virginia Sen. Joe Manchin has blocked from moving forward, Biden said he’ll pass the parts of the package that can net sufficient votes.

"I think we can break the package up, get as much as we can now, come back and fight for the rest," he said, later adding that he would apply the same strategy to his voting rights agenda.

If Mr. Biden had one set of regrets, it seemed to be his inability because of the coronavirus to connect with more Americans outside the capital. He noted that this challenge was most acutely felt by Black voters who wanted him to push more aggressively on expanding access to voting. His one major strategic change, he said, will be to tour the country more frequently.

Mr. Biden said he still hoped that voting rights legislation would pass in some form and wasn’t prepared yet to discuss possible executive action on the issue. Still, he understood that civil rights groups were anxious and frustrated about the lack of action, particularly Black voters who question why he didn’t press the issue harder, and for longer.

"I don’t get a chance to look people in the eye because of both Covid and things that are happening in Washington," he said.

The President also acknowledged that he underestimated how strong the GOP resistance against him would be, as his bipartisan infrastructure deal increasingly appears to be the main exception to a fierce and unyielding partisan divisiveness that now defines US politics.

"I did not anticipate that there would be such a stalwart effort to make sure that the most important thing was that President Biden didn’t get anything done,” he said.

This is a perilous time for Biden: The nation is gripped by another disruptive surge of virus cases, and inflation is at a level not seen in a generation. Democrats are bracing for a potential midterm rout if he can’t turn things around.

As a candidate, he promised to restore normalcy to a pandemic-riven nation, but overcrowded hospitals, shortages at grocery stores and fierce divisions over vaccine mandates and face mask requirements abound.

The President is also now staring down an inflation rate that has gone from 1.7 per cent at his inauguration to 7 per cent, a nearly 40-year high that has contributed to many Americans becoming pessimistic about the overall economy. He called on the Federal Reserve to lessen its monetary boosting of the economy by raising interest rates, which would in theory help to reduce inflation.

"Given the strength of our economy, and the pace of recent price increases, it’s important to recalibrate the support that is now necessary," Mr. Biden said. "Now, we need to get inflation under control."

He also addressed the crisis on the Ukraine border and raised concerns that Moscow is ready to launch a further invasion. Biden said he believes Russian President Vladimir Putin doesn’t want full-blown war and would pay a "dear price" if he moves forward with a military incursion.

On the Senate floor, Democrats are on track to lose a vote to change the chamber’s rules in order to pass voting reform legislation due to the opposition of Democratic Sens. Kyrsten Sinema of Arizona and Manchin.

That will underscore the constraints on Biden’s influence a week after he delivered an impassioned speech in Atlanta comparing opponents of the measures to segregationists and exhorting senators to action.

Mr. Biden said he’s convinced the country is still with him. "I don’t believe the polls," he said.