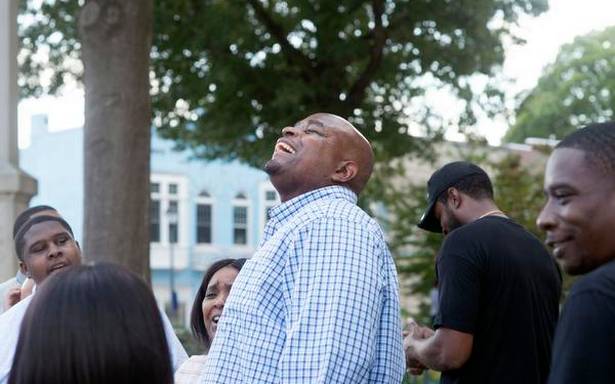 Roy Cooper’s pardon of innocence allows Dontae Sharpe to apply for compensation up to $7,50,000 for his wrongful conviction.

North Carolina Governor Roy Cooper on Friday pardoned a man who spent 24 years behind bars for a murder he has long said he did not commit.

Mr. Cooper’s pardon of innocence allows Dontae Sharpe to apply for compensation up to $7,50,000 for his wrongful conviction.

“Mr. Sharpe and others who have been wrongly convicted deserve to have that injustice fully and publicly acknowledged,” the Governor said in a statement announcing he had pardoned the man after a careful review of the case.

In 1995, Mr. Sharpe was given a life sentence at the age of 19 for the first-degree murder of 33-year-old George Radcliffe, whom he was accused of killing a year earlier during a drug deal.

Mr. Sharpe had maintained his innocence throughout and said in a 2019 interview that his faith and knowledge he was innocent guided his refusal to accept offers of a lighter sentence in exchange for a guilty plea.

At a virtual news conference on Friday, just an hour after Mr. Cooper’s announcement, Mr. Sharpe said he was in disbelief when his lawyer called him with the news. He said he was still processing it and also was thinking of those who had taken to the streets and held vigils on his behalf.

“When you’re dealing with us human beings, it can go any way, yes and no. I didn’t know what to expect. I was believing for a pardon.” The government’s case against Mr. Sharpe relied in part on testimony from a 15-year-old girl at the time who claimed she saw Mr. Sharpe kill Radcliffe but later recanted and said she wasn’t present at the time of the shooting. She later said her claims were made up, based on what investigators told her.

Mr. Sharpe was unsuccessful in his repeated efforts for a new trial until a former state medical examiner testified that the state’s theory of the shooting was not medically or scientifically possible.

A judge subsequently ordered more evidence to be heard. Mr. Sharpe was released from prison in August 2019 after the prosecutor said the state wouldn’t pursue a retrial.

The NAACP had long pushed for Mr. Sharpe’s release over the years and urged Mr. Cooper to issue a pardon of innocence. In recent months, racial justice groups have demanded the Governor grant Mr. Sharpe the clemency needed in order to apply for compensation for his wrongful conviction. They held vigils in front of Mr. Cooper’s state residence in downtown Raleigh for several weeks.

The Rev. Anthony Spearman, a longtime North Carolina NAACP leader who was among those who participated in a vigil outside the Governor’s Mansion pushing for a pardon, said, “This should have happened a long time ago.” Mr. Sharpe thanked Mr. Cooper but called out a criminal justice system he considers “corrupt.” He said he planned to celebrate on Friday evening with his family and will continue to press for other inmates to receive justice.