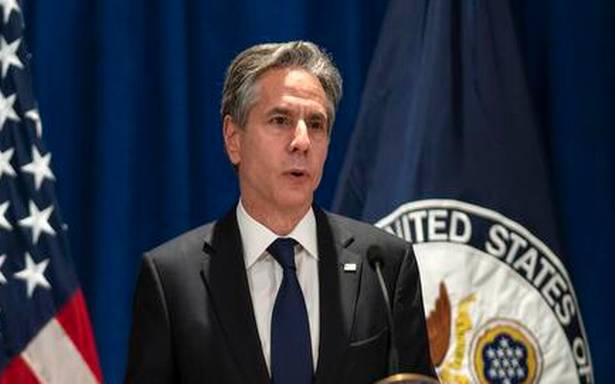 Mr. Blinken was responding to a question on whether the U.S. would welcome a nuclear submarine alliance between India and France as the Quad Leaders’ Summit gets underway.

The United States. and France have “very strong interests” in strengthening their respective relationships with India even more, US Secretary of State Antony Blinken has said, while not getting into the “specific hypotheticals” of a future nuclear submarine alliance between New Delhi and Paris.

Also read: No link between AUKUS and Quad, says India

Mr. Blinken was responding to a question on whether the U.S. would welcome a nuclear submarine alliance between India and France as the Quad Leaders’ Summit gets underway.

He was also asked about the recent telephonic conversation earlier this week between Prime Minister Narendra Modi and French President Emmanuel Macron, who have a "wide partnership".

“I’m not going to get into any specific hypotheticals about the future, but let me simply say that both France and the United States have very strong interests in strengthening even more our respective relationships with India. This is something that we strongly support,” Mr. Blinken said at a press conference here on Thursday.

Mr. Modi and Mr. Macron discussed the recent developments in Afghanistan and shared their concerns about the possible spread of terrorism, narcotics, illicit weapons and human trafficking.

During their telephonic conversation, the two leaders reviewed the increasing bilateral collaboration in the Indo-Pacific region, and the important role that the India-France partnership plays in promoting stability and security in the region, a statement released by the Prime Minister’s Office in New Delhi said.

On another question on Mr. Blinken’s meeting with French Foreign Minister Jean-Yves Le Drian, he said that “we are working now at the direction of President Macron and President Biden on a process of in-depth consultations on a series of issues moving forward to, in very practical ways, deepen the cooperation and coordination between our countries, which for many years and in many ways is already remarkably strong, but we can do more, and we can do better.” France is angry after the United States, Australia and the UK clinched a deal to supply Australia with submarines.

Mr. Blinken said the U.S very much welcomes European engagement and French engagement and leadership in the Indo-Pacific, and that’s a point that bears emphasis.

“The European Union strategy that came out on the Indo-Pacific a few days ago, a strategy in which France played a leading role in developing, is one that we very, very strongly welcome.

"We’re going to put out our own revised strategy in the months ahead. It will be very much informed by what the European Union has done with France’s very, very strong input. And so one area where we will look to deepen our cooperation and collaboration is in the Indo-Pacific, and there are many ways in which we can do that.” The resource-rich Indo-Pacific region is where China has been trying to spread its influence.

India, the US and several other world powers have been talking about the need to ensure a free, open and thriving Indo-Pacific in the backdrop of China’s rising military manoeuvring in the region.

09/26/2021 World Comments Off on U.S. and France have very strong interests in strengthening ties with India: Blinken
India