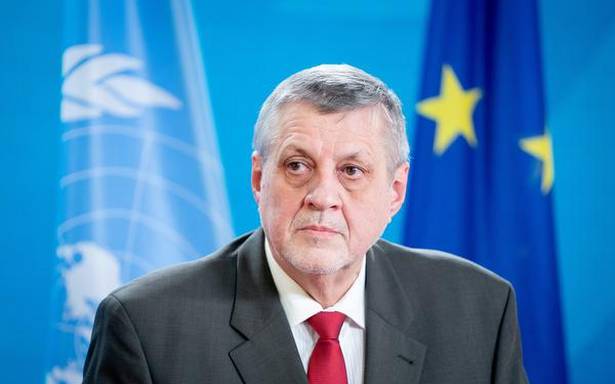 Libya plunged into turmoil after a NATO-backed uprising in 2011 toppled dictator Muammar Qaddafi, who was later killed

The United Nations’ top envoy for Libya is resigning weeks ahead of presidential elections seen as critical to the country’s stability after nearly a decade of chaos, the world body said November 23.

Jan Kubis decided to step down after just 10 months in the job. With the presidential vote set for December 24, the U.N. is “working as quickly as possible to ensure continuity of leadership,” spokesperson Stephane Dujarric said at a news briefing at U.N. headquarters.

He didn’t give a reason for Mr. Kubis’ departure, but said the envoy didn’t have any falling-out with Secretary-General Antonio Guterres. The Geneva-based Mr. Kubis is still expected to brief the U.N. Security Council on November 24, as scheduled before his resignation.

Mr. Kubis, a former Slovak foreign minister who previously held high-level U.N. posts in Iraq and Afghanistan, became the head of the U.N. political mission in Libya in January, after the world body sought for nearly a year to fill the sensitive job. One leading candidate turned it down, some U.N. member countries objected to other suggestions and there were changes in the job itself.

Libya plunged into turmoil after a NATO-backed uprising in 2011 toppled dictator Muammar Qaddafi, who was later killed. The oil-rich nation then became divided between rival governments — one in the east, backed by military commander Khalifa Hifter, and a U.N.-supported administration in Tripoli. Each side is backed by different militias and foreign powers.

U.N.-mediated talks led early this year to the formation of a transitional government intended to lead the country to the December elections. Hopefuls include Hifter, Qaddafi’s son Seif al-Islam, former interior minister Fathi Bashagha, parliament leader Aguila Saleh and interim Prime Minister Abdul Hamid Dbeibah, who filed a request to run despite rules barring him from doing so.

“Holding the elections in Libya, even in less-than-ideal situation, and with all imperfections, challenges and risks, is much more desirable than no elections,” he told the Security Council in September. “That could only foster division, instability and conflict.”

Dujarric said Mr. Kubis’ resignation wasn’t taking effect immediately but didn’t specify when it would. He emphasized that the U.N. is continuing its work to support the election process.