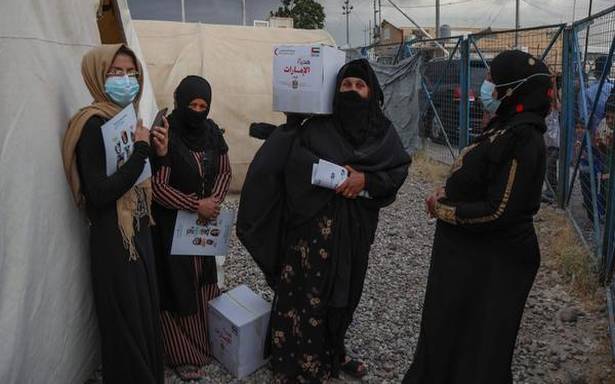 Turkish forces have stepped up attacks on bases of the outlawed PKK inside northern Iraq over the last year, focusing their firepower and incursions mainly on a strip of territory up to 30 km inside Iraq.

A Turkish air strike killed at least three people on Saturday at a camp for displaced people in northern Iraq, said Rashad Kelali, a Patriotic Union of Kurdistan party official.

The strike on the camp housing thousands of Kurdish refugees from Turkey took place three days after Turkish President Tayyip Erdogan warned Iraq that Turkey would “clean up” a refugee camp which it says provides a haven for Kurdish militants.

An Iraqi security official, who spoke on condition of anonymity, confirmed an air strike had killed and injured people in the camp but did not give any details.

Turkish forces have stepped up attacks on bases of the outlawed Kurdistan Workers Party (PKK) inside northern Iraq over the last year, focusing their firepower and incursions mainly on a strip of territory up to 30 km (19 miles) inside Iraq.

Mr. Erdogan said on Thursday that Makhmour, a camp 180 km south of the Turkish border which has hosted thousands of Turkish refugees for more than two decades, was an “incubator” for militants and must be tackled.

The camp was established in the 1990s when thousands of Kurds from Turkey crossed the border in a movement Ankara says was deliberately provoked by the PKK.

The PKK, designated a terrorist organisation by the United States and European Union, has fought an insurgency against the state in mainly Kurdish southeast Turkey since 1984. More than 40,000 people have been killed in the conflict.

Makhmour was targeted by Turkish air strikes a year ago, although there were no reports of casualties at the time, but a senior Turkish official said it was now a priority for Ankara.

Waving the Kurdish flag and chanting “our voices are voices of freedom against occupation”, dozens marched in Iraq’s Kurdish province of Sulaimaniya later on Saturday to denounce the Turkish incursion.

“They are killing innocent women and children … Turkey wants to occupy Kurdistan, but we, the Kurds here along with the PKK, will fight until the last moment of our lives,” said protester Omid Saleh.

Turkey has taken its decades-old conflict with Kurdish militants deep into northern Iraq, establishing military bases and deploying armed military drones against the fighters in their mountain strongholds.

In a separate incident on Saturday, five Iraqi Kurdish Peshmerga fighters were killed and four wounded in an ambush by the PKK in northern Iraq, the ministry of Peshmerga said in a statement early on Saturday.

The clashes took place on Matina mountain in the town of Amedi in the northern Kurdistan Region, the statement said.