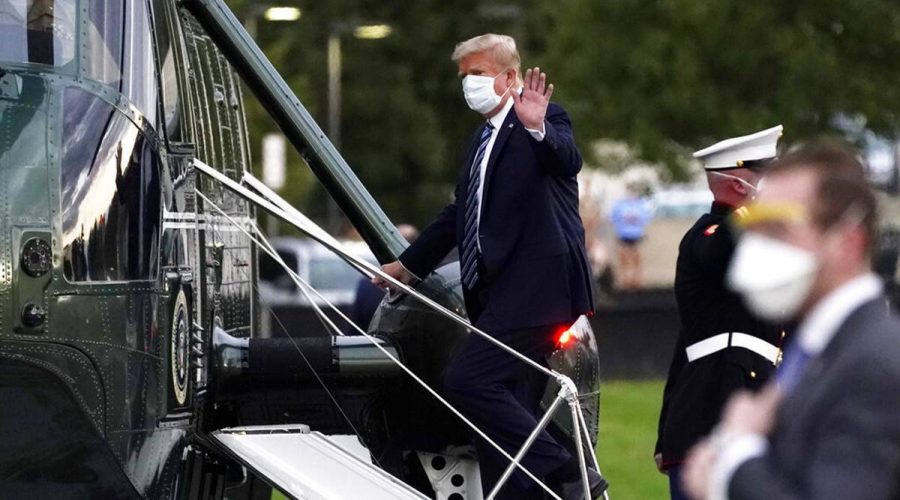 In total, Donald Trump tweeted or re-tweeted just under 40 times between 8 and 10 p.m. Washington time. President Donald Trump spent his first full day home from the hospital out of sight, but looked to make up for his absence Tuesday night with a spree of Twitter posts unleashing on some of his favorite targets.
In just a two-hour stretch, Trump announced he was declassifying all documents related to the probe into his campaign’s ties to Russia — a move he subsequently claimed to have already taken — re-tweeted criticism of a premium cable miniseries, predicted the confirmation of Amy Coney Barrett to the Supreme Court would be “fast and easy,” and blasted presidential debate moderator Chris Wallace as “a total JOKE.”

He also criticized his own Food and Drug Administration, saying safety standards prepared by the agency for a coronavirus vaccine amounted to “another political hit job.” The president insulted the physical appearance of House Speaker Nancy Pelosi and declared that the upcoming election would be the “most corrupt” in American history. He further pledged to also declassify documents related to the four year old investigation into former Secretary of State Hillary Clinton’s use of a private email server.

In total, the president tweeted or re-tweeted just under 40 times between 8 and 10 p.m. Washington time.

The remarkable barrage seemed to reflect his concerns about his own standing as he tries to recover from the coronavirus while watching his poll numbers slip. It prompted Democratic nominee Joe Biden to post an animated image of himself imploring the president to “get off Twitter.”

National polls from CNBC, SurveyUSA, and CNN released Tuesday all show Biden holding a double-digit advantage over Trump, while other surveys had the former vice president maintaining or expanding his lead in crucial battlegrounds like North Carolina, Florida, Pennsylvania and Michigan.

Trump added another wrinkle when he announced on Tuesday afternoon – in another string of tweets – that he was ending negotiations over an additional coronavirus stimulus bill. The news sent markets into a swoon and prompted concern among Republicans over the likely political fallout. The benchmark S&P 500 slumped 1.4% after Trump tweeted his comments late in the trading session, erasing a gain of as much as 0.7%.

But on Tuesday night, again on Twitter, he indicated that he was willing to approve aid for airlines and small businesses.

The president is still less than a week removed from his diagnosis for coronavirus, which prompted a three-day hospitalization at Walter Reed National Military Medical Center. Trump’s doctors said he would continue to receive treatments – including steroids and the antiviral remdesivir – upon returning to the White House.

Trump is battling the virus – which has already killed more than 210,000 Americans – alongside more than two dozen aides and close associates who have tested positive in the past week. Earlier Tuesday night, Stephen Miller – a senior aide and his principal speechwriter – announced he was among those who had contracted the virus.