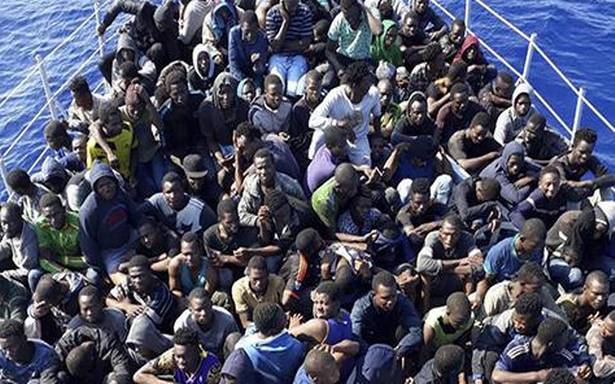 Dreams of going abroad for a job took Masum Miah, a man from eastern Bangladesh, on a journey across the Mediterranean, a vast sea known for tourist romance on the one side and migrant deaths on the other.

This dark chapter of Mr. Miah’s life slowly unfolded in Sylhet after a human trafficker started shadowing him with a promise to transport him to Italy, one of the gateways for illegal migrants to Europe. The cost of the illicit migration was 800,000 taka ($9,450 approximately). That was paid for by Mr. Miah’s brother Masud Ahmed. The smuggler, named by Mr. Miah as Rafique Baraigi, put him in touch with his son who runs a trafficking ring in Tripoli, Libya.

In early May, after spending 15 days in Tripoli, Mr. Miah, 30, and 14 others set out for the Libyan coast by car. After a long overland journey, the vehicle came to a halt. They then had to walk for about two hours, sometimes through waters along the coastline, to a waiting migrant boat. More desperate groups appeared on the scene — all bound for Italy.

After some time, a large boat packed with migrant workers — 51 of them from Bangladesh — headed out to sea. The journey became even riskier after smugglers transferred them to three smaller inflatable boats by force, to cross the rest of the Mediterranean. Those who refused to oblige were beaten up.

On May 10, some 65 people drowned after one overloaded boat sank, approximately 45 nautical miles off the coast of Tunisia, in one of the worst incidents on the Mediterranean in months. Local fishermen spotted the migrants. Sixteen of them were pulled from the water and brought to the coast of Zarzis by the Tunisian Navy. Mr. Miah was one of them.

The group had left Zuwara, around 120 km west of Tripoli, on the evening of May 9, the UN High Commissioner for Refugees (UNHCR) said, citing the survivors. Their boat ran into trouble soon after encountering strong waves.

“This is a tragic and terrible reminder of the risks still faced by those who attempt to cross the Mediterranean,” Vincent Cochetel, UNHCR Special Envoy for the Central Mediterranean, said in a statement. As many as 164 people died while navigating between Libya and Europe in the first four months of this year. One person has died on the central Mediterranean for every three who reached European shores after departing from Libya. Many of those who undertook dangerous sea crossings were Bangladeshis.

These deaths of migrants during sea journeys expose a dark underbelly of joblessness and poverty in Bangladesh, a country often feted globally for its economic growth. This shows that the nation’s bright development story has bypassed a large section of young people, often struggling to escape the country’s rural backwaters and ending up undertaking fatal journeys.

“When Bangladesh is reported as one of the single-biggest sources of refugees in the world, it is a shame for the entire country. We need to control trafficking in the name of migration. It is a new threat. We really need to work hard to stop these people from taking desperate journeys,” said Shariful Islam Hasan, head of the migration programme at BRAC, a non-governmental organisation. “The government needs to find out why these people are so adamant at leaving the country. Is the issue connected to good governance?” For many Bangladeshis, migration offers one of the few paths out of the squalor of their everyday life. For some, it is a passage to upward mobility.

Bahadur, 26, said he shunned his job as a mobile-phone repairman in his hometown, located in the central district of Kishoreganj, and headed out to Libya with the help of a trafficker. After being trapped in a warehouse in the middle of a Libyan desert for two days, he had to walk and, sometimes, run for miles in the dark towards a migrant boat. The overcrowded boat capsized after hours of its journey across the sea. “I can’t sleep at night. I hear the cries of dying people around me,” he said. “I can’t explain how I survived.”

After these tragic episodes in their lives, Mr. Miah and Mr. Bahadur will try to settle down in Bangladesh, but many more, inspired by the stories of other successful sea crossings, will take up similar risky journeys. To stop that, the government should act fast.

(Arun Devnath is a journalist based in Dhaka.)