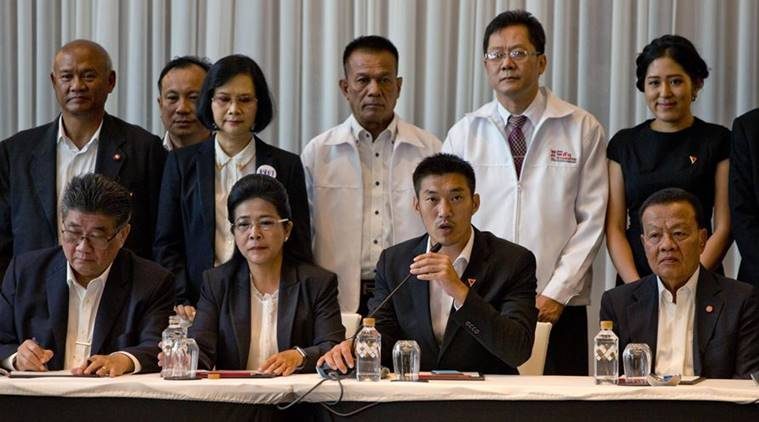 An agreement would likely sink the opposition Democratic Front coalition's bid to keep members of the junta from retaining dominance over the government five years after the army seized power in a coup. Two Thai political parties were meeting leaders of a pro-army party on Monday to discuss a possible deal to keep military junta chief General Prayuth Chan-Ocha on as prime minister more than two months after a disputed election.

An agreement would likely sink the opposition Democratic Front coalition’s bid to keep members of the junta from retaining dominance over the government five years after the army seized power in a coup.

The Democrat and Bhumjaithai parties would be given formal coalition invitations by Palang Pracharat, the pro-military party formed last year by members of the junta’s Cabinet.

The two parties’ seats would give the pro-army coalition a slim majority in the House of Representatives.

The Democrat Party, Thailand’s oldest political party, was to meet Palang Pracharat leaders late on Monday morning and would be followed by Bhumjaithai in the afternoon. It was not clear if any agreement would be announced.

“We are confident, but we need all the commitment from coalition partners,” Palang Pracharat’s leader, Uttama Savanayana, said on Monday before a meeting with the Democrat Party.

Puttipong Punnakanta, one of Palang Pracharat’s board members and a member of parliament, told Reuters on Sunday the party – which gained the second-largest number of seats in the March 24 election – said he was confident of making a deal.

“It’s certain that we will be forming a coalition government, with at least 251 seats and more,” he said.

“We will see Prayuth Chan-Ocha as prime minister next month.”

The opposition Pheu Thai Party, which was ousted in 2014, won the most seats in the 500-member House of Representatives but its Democratic Front coalition did not gain a majority when final results were announced.

The seven-party Democratic Front has complained that the Election Commission changed a complex formula of seat allocation after the vote, giving seats to 11 small parties at the expense of a projected opposition majority under the old formula.