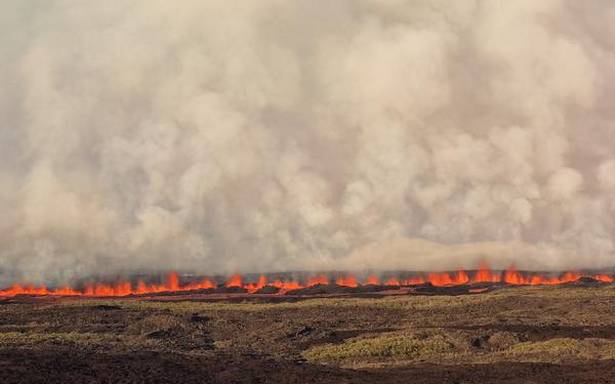 A cloud of gas and ash from Wolf Volcano rose to 3,793 meters (12,444 feet) above sea level following the eruption

The tallest mountain in the Galapagos islands was erupting on January 8, spewing lava down its flanks and clouds of ash over the Pacific Ocean, according to Ecuador’s Geophysical Institute.

A cloud of gas and ash from Wolf Volcano rose to 3,793 meters (12,444 feet) above sea level following the eruption that began shortly before midnight of January 5 local time, the Institute said.

Ecuador’s Emergency Operations Committee said the new eruption on Isabela Island, the largest in the Galapagos chain, didn’t represent a risk to humans or to native local species. Populated areas are located at the opposite side of the island.

But the Environment Ministry said eight people, including national park guards and scientists doing field work on pink iguanas living on the volcano’s slopes, were evacuated from the area.

The Galapagos Government Council said the emergency committee would continue monitoring the volcano to see in which direction the lava flows.

The 1,701-meter (5,580-foot) volcano is one of numerous active volcanos in the Galapagos, which are nearly 1,000 kilometers (600 miles) from mainland South America.

Images taken from afar and circulated by the government showed glowing lava piercing the pre-dawn darkness.