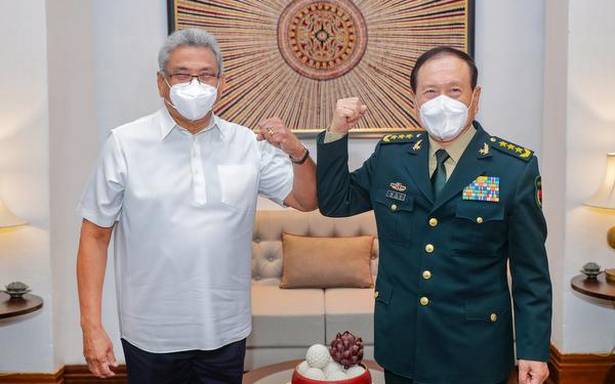 The Sri Lankan President said his country “has been pursuing an independent foreign policy and will never bend to pressure from major powers outside the region as well as never forge an alliance with any country,” Xinhua news agency reported on Wednesday.

Sri Lanka and China vowed to enhance pragmatic cooperation in all sectors, “including the military”. While specifics of the enhanced military ties are yet to emerge, Senior Sri Lankan Defence officials and the visiting Chinese delegation signed a ‘Military Assistance Protocol’, Sri Lanka’s Ministry of Defence said in a statement issued after the top Chinese official’s departure Thursday morning.

Thanking China for providing “long-term and precious” support to Sri Lanka, President Rajapaksa said he hoped to learn from the Communist Party of China’s governance experience on poverty alleviation and rural revitalisation, Xinhua said in its report.

General Wei, in his talks with the Sri Lankan leadership, seems to have reiterated his message in Dhaka on Tuesday slamming “powers from outside the region” for forging military alliances in South Asia. Chinese state media quoted General Wei as telling the Sri Lankan leadership: “Certain major countries are keen to form cliques and factions and seek regional hegemony, which goes against people’s shared aspiration and severely harms the interests of the regional countries. China appreciates Sri Lanka’s independent and non-aligned policy and will make joint efforts with Sri Lanka to strengthen coordination and safeguard regional peace and tranquility.”

His apparent attack on the India-U.S.-Australia-Japan Quad grouping echoed reservations voiced by Sri Lanka earlier. Speaking in a webinar in October last year, Sri Lanka’s Foreign Secretary Admiral Jayanath Colombage had said: “We are observing the rise of Quad as an exclusive military alliance. That is the problem. If Quad is aiming at economic revival, there are no issues.”

The Chinese Minister also held talks with the Sri Lankan Prime Minister on Wednesday. PM Mahinda Rajapaksa said in tweet that he thanked China for extending vaccines to Sri Lanka. “We also discussed post-pandemic economic recovery and steps to be taken to ensure economic stability," he said.

Meanwhile, Indian High Commissioner in Colombo Gopal Baglay called on PM Rajapaksa on Thursday, the mission said in a tweet. High Commissioner called on Hon’ble PM @PresRajapaksa. He thanked the Sri Lankan leadership for their solidarity with #India,especially at this time of #COVID19 pandemic. He sought guidance of Hon’ble PM in taking bilateral relations in all spheres with even greater momentum,” said the tweet of the meeting, held just after the Chinese official’s visit. It comes a day after President Gotabaya Rajapaksa wrote to PM Narendra Modi, expressing concern about the Covid19 surge in India, while offering special Buddhist prayers for the people of India.