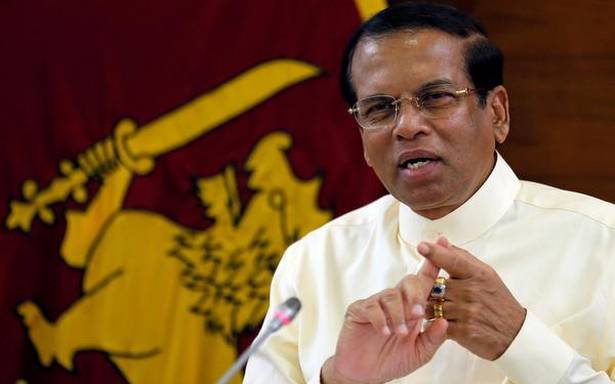 COLOMBO: President Maithripala Sirisena has pardoned firebrand monk Gnanasara Thero, according to top government sources. “He has signed the papers, they have been sent to the Justice Ministry,” said a senior official who did not wish to be named.

The Buddhist priest, who leads the reactionary group Bodu Bala Sena (Buddhist Power Force or BBS), was serving prison term following conviction for contempt of court. Widely known for his hate-speech against Muslims, he has in the past also been accused of inciting anti-Muslim violence – a troubling post-war trend in the island.

Gnanasara is likely to be released on Thursday, authorities said. Mr. Sirisena’s decision to pardon him comes at a time when Sri Lankan Muslims are fearing a backlash (https://www.thehindu.com/news/international/easter-sunday-blasts-sri-lankas-muslim-community-fears-backlash/article26926046.ece) following the April 21 Easter terror attacks. While authorities said two local radical Islamist organisations were responsible, the IS too claimed responsibility for the ghastly, well-planned serial blasts in which over 250 people died.

The Muslim community’s fears came true when mobs attacked dozens of mosques, and rows Muslim-owned homes and shops in Kurunegala and Gampaha districts on May 12 and 13, in the biggest outburst of violence since Easter. A middle-aged Muslim timbre merchant died.

Locals accused the police of inaction even as mobs continued with the attacks violating a police curfew. Among those arrested subsequently were individuals linked to hard-line Sinhala-Buddhist groups, notorious for leading similar, targeted attacks on Muslims.

A week after the latest bout of anti-Muslim violence, President Sirisena’s pardon that sets Gnanasara free has evoked much concern. Local media reported that last week Mr. Sirisena met Gnanasara in prison for a discussion that reportedly lasted almost an hour.

“Pardoning Ven. Ghanasara is a slap on the independence of judiciary: he was convicted of interfering with court & contempt of court. No civilised nation will lightly pardon such a convict. After 19th Amendment, Presidential power to pardon is subject to judicial review!” prominent human rights lawyer J. C. Weliamuna tweeted.

Last summer, a Sri Lanka court convicted Gnanasara for contempt of court and criminal intimidation. In January 2016, Gnanasara had stormed the courtroom and openly threatened Sandya Eknaligoda, when a magistrate court was hearing a case of her disappeared husband, the dissident cartoonist Prageeth Eknaligoda, who went missing nearly a decade ago.

In 2017, the controversial priest was on the run for about a month, evading arrest for a string of hate attacks against Muslims that he allegedly provoked. He later surrendered to the police and was granted bail. When a magistrate court sentenced him to jail in June 2018, many saw it as a welcome shift towards ending impunity enjoyed by the saffron-robed monk.