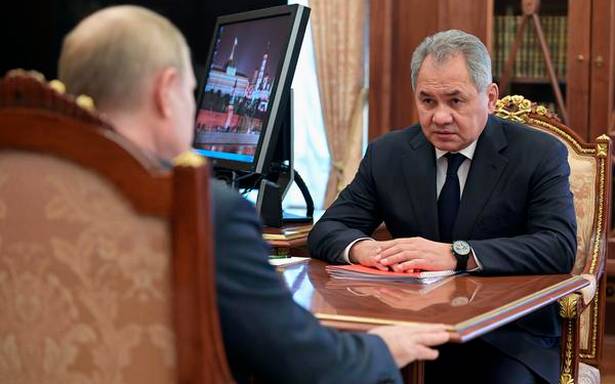 "The Defence Secretary is glad that Russia has accepted the invitation to talk with his counterpart," the source said.

"Given the last defence bilateral between our two countries took place in London in 2013, Russian Defence Minister Sergei Shoigu has offered to meet in Moscow instead," added the source.

"The Secretary of State has been clear that he will explore all avenues to achieve stability and a resolution to the Ukraine crisis."

Germany’s navy chief meanwhile resigned following a formal protest from Kiev over comments he made over the Ukraine crisis, which were quickly disowned by Berlin.

Tens of thousands of Russian troops along with an arsenal of tanks, fighting vehicles, artillery and missiles are massed on Ukraine’s border. Russia has denied it plans to invade but the White House believes an attack could now come "at any point".

Britain’s Foreign Office on Saturday advised against all travel to two pro-Moscow separatist territories Donetsk and Lugansk, as well as Crimea, which Russia annexed in 2014.

It also advised against all but essential travel to the rest of Ukraine and recommended that British nationals should register their presence in the country.

A U.S. State Department spokesman, speaking on condition of anonymity, said Saturday that they had no plans to evacuate US citizens from Ukraine, adding that commercial flights were currently available.

Kay-Achim Schoenbach, the head of Germany’s navy, announced his resignation Saturday, after a diplomatic storm over comments he made at a think tank meeting in New Delhi onFriday.

In video footage of the meeting, Schoenbach said the idea that Russia wanted to invade Ukraine was "nonsense", adding that what Putin wanted was "to be respected" and probably deserved respect.

He also said that the Crimean peninsula, which Russia annexed from Ukraine in 2014, was gone and would not come back to Ukraine.

After admitting his mistake on Twitter Saturday, he issued a statement a few hours later saying he submitted his resignation "to avoid any more damage being done to the Germany navy and above all, to the German Federal Republic".

A German ministry spokesman told AFP the vice-admiral would leave his post "with immediate effect".

Earlier Saturday, the Ukrainian foreign minister had summoned Germany’s ambassador to Kiev to protest "the categorical unacceptability" of Schoenbach’s comments.

Kuleba said on Twitter that Germany’s statements "about the impossibility of supplying defence weapons to Ukraine" did not match "the current security situation".

Ukraine’s minister stressed that "today the unity of the West in relation to Russia is more important than ever".

Ukraine is "grateful" to Germany for the support it has already provided, but its "current statements are disappointing", he added.

01/23/2022 World Comments Off on Russian, U.K. defence ministers to meet over Ukraine
India