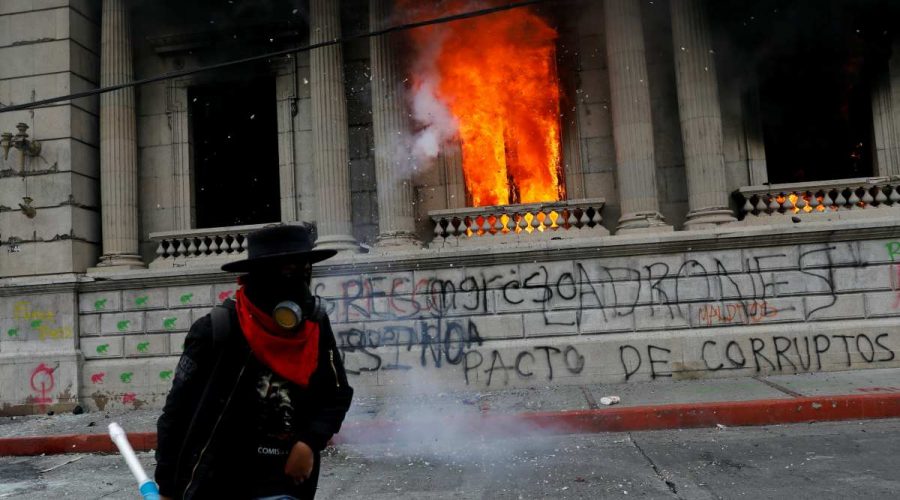 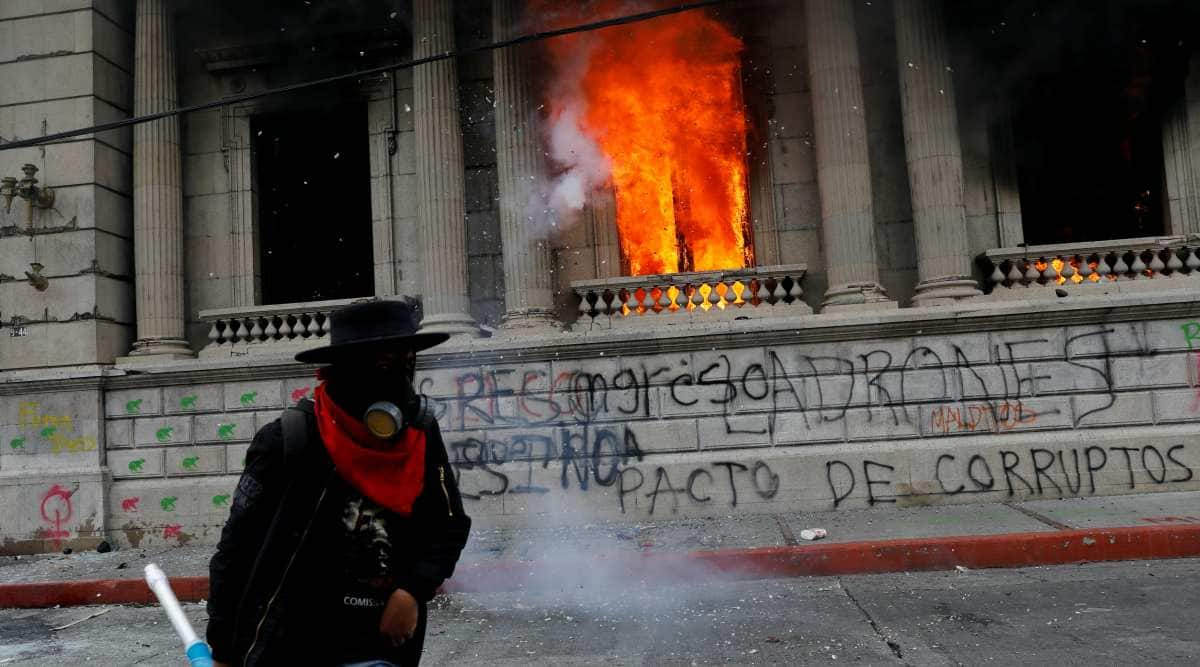 Hundreds of protesters broke into Guatemalas Congress and burned part of the building Saturday amid growing demonstrations against President Alejandro Giammattei and the legislature for approving a controversial budget that cut educational and health spending.

The incident came as about 10000 people were protesting in front of the National Palace in Guatemala City against corruption and the budget which protesters say was negotiated and passed by legislators in secret while the Central American country was distracted by the fallout of backtoback hurricanes and the COVID19 pandemic.

About 1000 protesters were demonstrating outside the Congress building.

Video on social media showed flames shooting out a window in the legislative building Police fired tear gas at protestors and about a dozen people were reported injured.

We are outraged by poverty injustice the way they have stolen the publics money said psychology professor Rosa de Chavarria.

I feel like the future is being stolen from us We dont see any changes this cannot continue like this said Mauricio Ramirez a 20yearold university student.

The amount of damage to the building was unclear but the flames initially appear to have affected legislative offices rather than the main hall of congress Protesters also set some bus stations on fire.

Anyone who is proven to have participated in the criminal acts will be punished with the full force of the law He wrote that he defended peoples right to protest but neither can we allow people to vandalize public or private property.

The president said he had been meeting with various groups to present changes to the controversial budget.

Discontent had been building over the 2021 budget on social media and clashes erupted during demonstrations on Friday Guatemalans were angered because lawmakers approved 65000 to pay for meals for themselves but cut funding for coronavirus patients and human rights agencies among other things.

Protesters were also upset by recent moves by the Supreme Court and Attorney General they saw as attempts to undermine the fight against corruption.

Vice President Guillermo Castillo has offered to resign telling Giammattei that both men should resign their positions for the good of the country He also suggested vetoing the approved budget firing government officials and attempting more outreach to various sectors around the country.

Giammattei had not responded publicly to that proposal and Castillo did not share the presidents reaction to his proposal Castillo said he would not resign alone.

The spending plan was negotiated in secret and approved by the congress before dawn Wednesday It also passed while the country was distracted by the fallout of hurricanes Eta and Iota which brought torrential rains to much of Central America.

The Roman Catholic Church leadership in Guatemala also called on Giammattei to veto the budget Friday.

It was a devious blow to the people because Guatemala was between natural disasters there are signs of government corruption clientelism in the humanitarian aid said Jordan Rodas the countrys human rights prosecutor.

He said the budget appeared to favor ministries that have historically been hotspots of corruption.

In 2015 mass streets protests against corruption led to the resignation of President Otto Perez Molina his vice president Roxana Baldetti and members of his Cabinet Both the former president and Baldetti are in jail awaiting trials in various corruption cases.