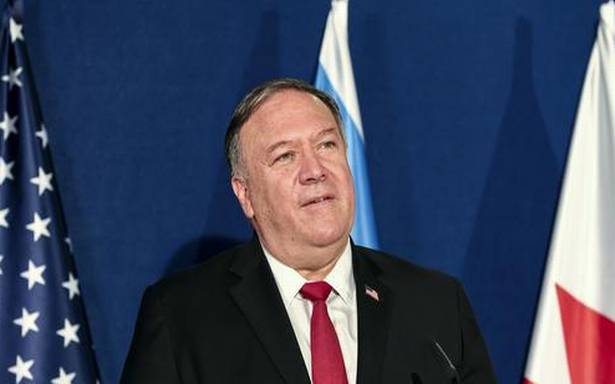 Mike Pompeo on Thursday paid the first visit by a U.S. Secretary of State to an Israeli settlement in the occupied West Bank, in a parting show of solidarity with Prime Minister Benjamin Netanyahu by the outgoing Trump administration.

Palestinians accused Mr. Pompeo of helping Israel to cement its control over West Bank land that they seek for a State after he made a trip to the Shaar Binyamin winery near the settlement of Psagot, just north of Jerusalem.

To Israel’s delight and Palestinian dismay, Mr. Pompeo in 2019 broke with decades of American foreign policy to announce that the U.S. under President Donald Trump no longer viewed Israel’s settlements as “inconsistent with international law”.

Palestinians and much of the world regard the settlements as illegal under international law.

After meeting with Mr. Netanyahu on Thursday morning Mr. Pompeo travelled to the West Bank to visit the settler winery, which has a blend named after him.

He also issued guidelines for Israeli products made in settlements to be labelled “Made in Israel” or “Product of Israel” when imported to the United States, removing the distinction between products made within Israel and those produced in occupied territory.

Mr. Pompeo’s visit departed from past policy that had kept top U.S. officials away from settlements, which Palestinians view as obstacles to a viable future State.