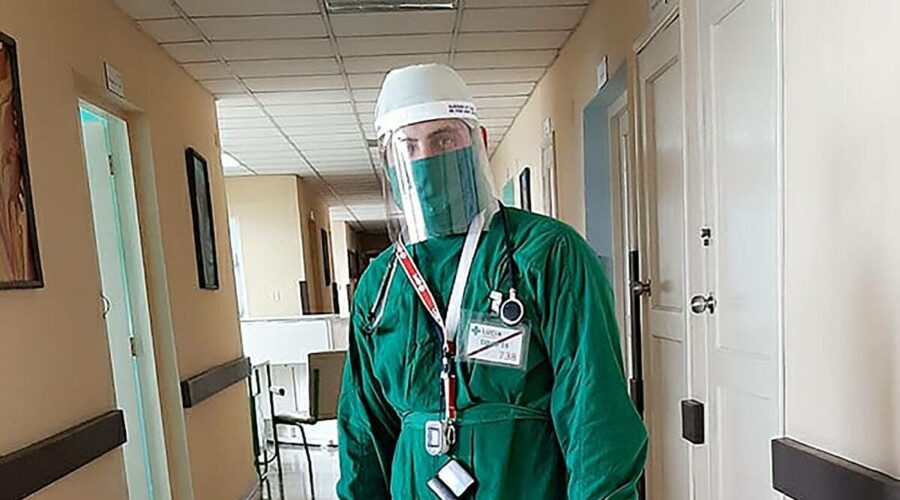 After fending off the coronavirus last year, Cuba has been recently ravaged by the highly contagious delta variant, which has sent case rates soaring and swamped the country’s medical system. 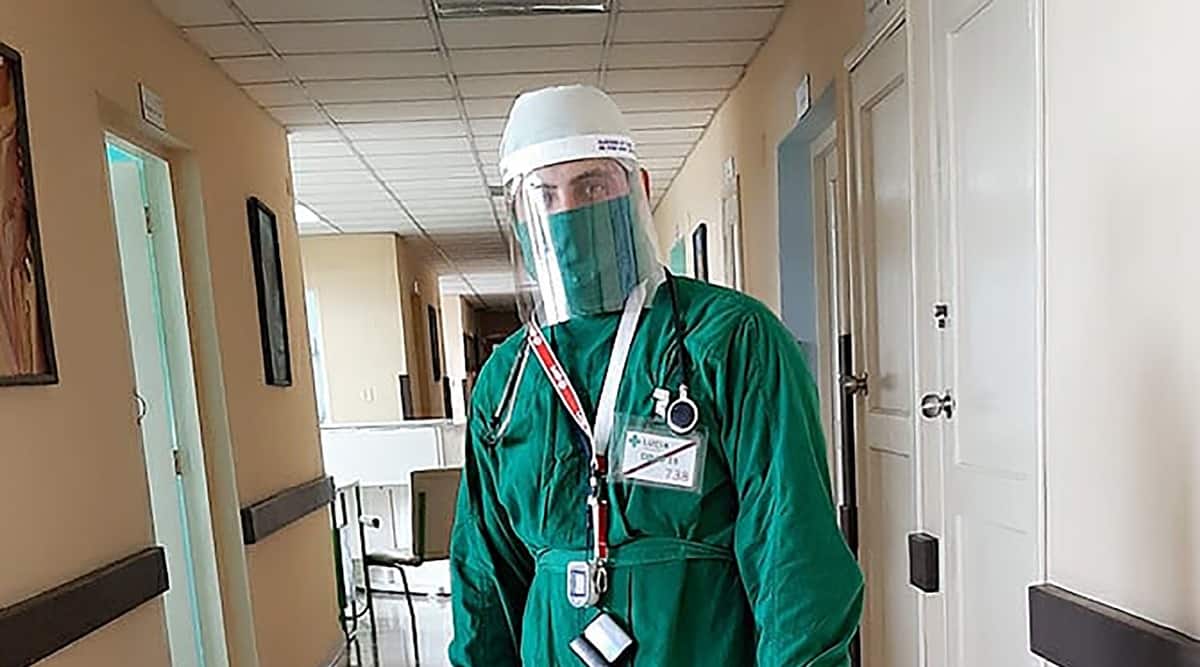 After fending off the coronavirus last year, Cuba has been ravaged this summer by the highly contagious delta variant, which has sent case rates soaring and swamped the country’s medical system.

More than 9,700 new cases were reported Monday, more than six times the number of new cases just two months ago, according to Ministry of Health figures.

Oxygen supplies for COVID-19 patients are running low, and the factory that produces the nation’s canisters is shut down.

Mortuaries and crematories have been overwhelmed. The city of Guantánamo, for example, is coping with a surge of deaths that on some days climbs to about eight times the usual number, a government official said. Cubans are posting heart-wrenching videos of dead relatives, saying their loved ones died for lack of medical care.

This weekend, after Cuba’s prime minister, Manuel Marrero Cruz, said that Cubans were complaining more about doctors and their poor service than they were about the shortages, nearly two dozen young physicians and medical students took to social media to state, one by one: “I am publicly declaring that doctors are not to blame for the collapse of the public health system.”

The move was a daring step in Cuba, where any public show of discontent may result in the loss of employment or even prison. On Tuesday, the government published a new cyberterrorism law that makes it illegal to use telecommunications to post “offensive” material that disrupts public order or hurts the “prestige” of the country.

Cuba’s president, Miguel Díaz-Canel Bermúdez, acknowledged recently that the pandemic “exceeded the capacity” of the Cuban health care system, but he blamed the U.S. trade embargo for the shortages the country suffers.

With growing shortfalls of medicine and other critical supplies, hospitals increasingly have neither the doctors, the medicine nor the oxygen to treat the rapidly increasing number of patients.

Large numbers of Cuban doctors work abroad, but recently more have stopped working in the country because they are infected with COVID-19 or have chronic health conditions that make them vulnerable, said Alexander Pupo, 31, a doctor in Holguín who lost his neurosurgery residency last year after criticizing the government.

“Patients are admitted as pure protocol, because the availability of medicines to treat them really doesn’t exist in the hospitals,” said Pupo, who has volunteered to help fight COVID-19. “I mean, they go in to die, practically.”

And when they do, he said, it might take three days for someone to come pick up the body.

While the pandemic has strained medical systems around the world, the calamity in Cuba is particularly significant because the government has for decades held its free health care system up as a signal accomplishment of the socialist revolution. But the growing crisis has revealed a frayed system that, while often producing medical breakthroughs, is also denounced as ill-equipped and underfunded.

Cuba has long earned billions in much-needed foreign currencies by sending nearly 30,000 doctors to countries around the world. But that practice is becoming harder to defend as more Cubans die of COVID-19. Several hundred doctors serving missions overseas were brought back home this month to work through their vacations.

The medical crisis comes as Cuba also grapples with a severe economic crisis and a social uprising last month that brought thousands of people into the streets, leading to an intense government crackdown that landed hundreds of people in jail.

On Monday, Díaz-Canel, the president, urged doctors to dispense oxygen carefully, because there was not enough to go around.

“Yesterday we had four oxygen cylinders for 16 to 20 ventilated patients, which isn’t anywhere near enough,” said Manuel Guerra Guerrero, a doctor in Buenaventura, in eastern Cuba. “The majority of us, all of us, are tired of seeing people die, people who could be saved.”

Guerra said that hospitals often have run out of COVID-19 tests, and that he usually turns to Facebook to ask friends for antibiotics. His hospital has run out of bandages.

Eduardo López-Collazo, a Cuban infectious disease researcher who lives in Spain, said his sister Norma, 64, tested positive for COVID-19 last month even after two doses of Cuba’s vaccine, and spent days in a waiting room in Ciego de Ávila province hoping to be admitted. Even when her oxygen level dropped to a worrisome 92, doctors told him that she did not meet the “international criteria” to be admitted to an intensive care unit, López-Collazo said.

“She spent four or five days at some kind of annex, a school, an improvised place that was turned into a facility where they sent patients,” he said. “It did not have adequate conditions, no respirators, none of that.”

She died on July 30. Despite two positive COVID-19 tests, the death certificate listed her cause of death as pulmonary thrombosis. López-Collazo believes that the Cuban government is systematically undercounting deaths to present a rosier picture than warranted. The country’s official death toll from the virus is 4,088.

Statistics from the Cuban Health Ministry showed that about eight people died each day of the coronavirus in the city of Guantánamo in the first week of August. But a government official in Guantánamo told a regional television news station that in the same time period the city of Guantánamo saw 69 deaths in a single day when the average number of daily deaths before the recent wave was just eight.

“If you go from eight deaths daily to 69 deaths daily, logically, no one was prepared,” Ihosvany Fernández, director of communal services in the province of Guantánamo, said in the TV interview. He said the province had 29 hearses, but only 17 were working. The incinerator at the state crematory broke down from overuse, he said.

The Cuban Ministry of Health did not respond to several requests for comment.

The Cuban government has said in state-run media that the caseload and fatality rate are improving in Havana and a few other cities, and that the death toll is expected to subside as more people get vaccinated. The country, however, has a severe shortage of the syringes needed to administer doses, according to Global Health Partners, a nonprofit that has organized a campaign to send millions to the island.

About a quarter of Cuba’s 11.3 million residents have received one of three vaccines that were developed and produced in the country.

Arachu Castro, a professor at the Tulane School of Public Health and Tropical Medicine who is studying Cuba’s response to COVID-19, said the country had one of the best coronavirus responses in Latin America in the early stages of the pandemic. But the situation shifted sharply after November, when tourists were allowed back into the country, and worsened again after Mother’s Day and Father’s Day, when many Cubans gathered with their families.

“In the first week of August, Cuba had about 400 severe cases every day, which is a lot,” she said.

The number of new daily cases increased exponentially for nine straight weeks this summer, and more than 100,000 people are in COVID-19 isolation centers for monitoring, according to an Aug. 9 report by the Pan American Health Organization, about half of whom have tested positive.

Ciro Ugarte, the agency’s director of health emergencies, told reporters last week that the number of COVID deaths in Cuba had risen 20% last week compared to the prior week. The lack of essential supplies to treat COVID-19 and other illnesses deepened the problems, he said, adding that the organization sent testing kits and other materials to Cuba.

Alexander Figueredo Izaguirre, a doctor in Cuba’s Granma province, said he was fired earlier this year, after he criticized the poor state of Cuban hospitals after the death of his grandfather.

“The health care system in Cuba has collapsed,” he said. “The funeral homes can’t cope, the hospitals can’t cope, the clinics can’t cope. We have been struggling for a year and a half in this battle against this disease — without weapons — when hundreds and thousands of people are dying.”