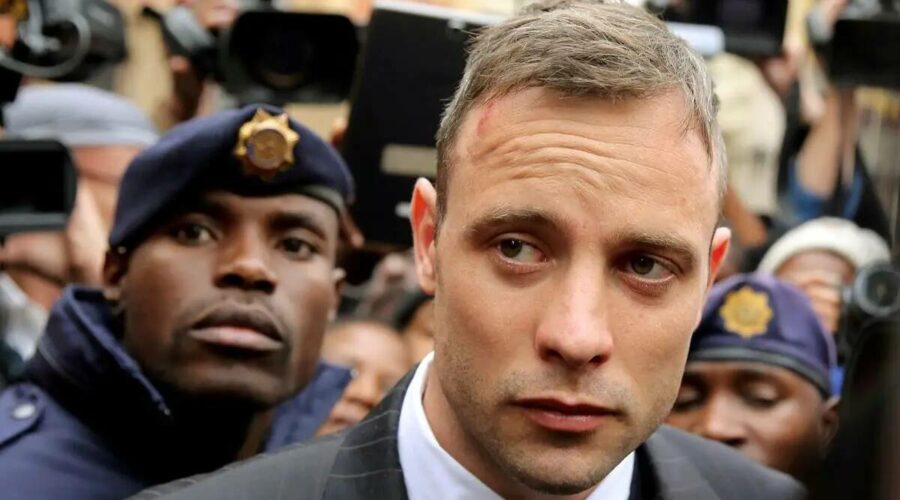 Pistorius shot his girlfriend, Reeva Steenkamp, through a locked bathroom door in February 2013. He claimed that her death was an accident, and that he had fired his gun in the belief that an intruder had entered his upscale home in a Pretoria suburb. Pistorius shot his girlfriend, Reeva Steenkamp, through a locked bathroom door in February 2013. He claimed that her death was an accident, and that he had fired his gun in the belief that an intruder had entered his upscale home in a Pretoria suburb.

He was convicted of manslaughter — later upgraded to murder — and sentenced to 15 years. And on Monday, the Department of Correctional Services said Pistorius, 34, had served half his sentence, making him automatically eligible for parole under South African law.

But first Pistorius will have to face his victim’s parents as part of the parole-consideration process — a prospect they sounded distressed by on Monday. The parents are “shocked and surprised” at having to consider the athlete’s freedom sooner than they expected, a lawyer for the family said.

At one point, Pistorius was not deemed eligible for parole until March 2023, but his lawyer asked South Africa’s Supreme Court of Appeal to take into account the more than 500 days the athlete had already served in prison after his initial conviction for manslaughter.

Pistorius was at first sentenced to five years in prison on that conviction in 2014, but after prosecutors challenged the verdict, the Supreme Court of Appeal replaced it with a finding of murder. The trial judge raised his sentence to six years, but then prosecutors appealed that, too, describing the penalty as “shockingly too lenient” for murder.

In 2017, the Supreme Court of Appeal more than doubled the sentence, to 15 years, the minimum for murder in South Africa.

Prison has “taken its toll” on the celebrity athlete once nicknamed the Blade Runner, said Julian Knight, Pistorius’ lawyer. “When Oscar is eventually released on parole, I don’t think he’ll be anywhere like the Oscar that went into prison,” Knight said.

Pistorius, whose legs were amputated below the knees when he was an infant, gained worldwide fame by competing at a high level, using carbon fiber prosthetic blades, and won multiple gold medals in Paralympic Games. After a lengthy fight with sporting authorities he won the right to compete against able-bodied athletes and ran in the 2012 Summer Olympics in London, but did not win any medals.

Pistorius, who has been serving his sentence at the Atteridgeville Correctional Centre in Pretoria, has attended several rehabilitation programs to prepare for parole, a correctional services department spokesperson said.

He will also undergo psychological evaluations and meet with a social worker and religious leader before a mediated “victim-offender” dialogue with his victim’s parents, June and Barry Steenkamp. Only then will a parole board consider his case.

The Steenkamps are girding themselves to meet with their daughter’s killer, although they can decline to do so. Authorities have contacted the family to begin the process.

June Steenkamp has publicly said her Christian faith compels her to forgive Pistorius. Her husband was described as not having found the same closure.

11/11/2021 World Comments Off on Oscar Pistorius, Olympic runner convicted of murder, is up for parole
India