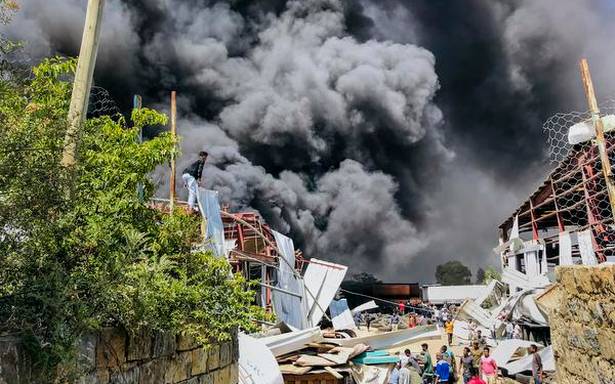 New air strikes hit the capital of Ethiopia’s Tigray region, residents said on Wednesday, as video showed injured people with bloodied faces being rushed to vehicles and thick black smoke rising in the sky. Ethiopia’s government said it targeted facilities to make and repair weapons, which a spokesman for the rival Tigray forces denied. Meanwhile, the United Nations said it is slashing by more than half its Tigray presence as an Ethiopian government blockade halts humanitarian aid efforts and people die from lack of food.

The war in Africa’s second-most populous country has ground on for nearly a year between Ethiopian and allied forces and the Tigray ones who long dominated the national government before a falling-out with Prime Minister Abiy Ahmed, the 2019 Nobel Peace Prize winner.

There was no immediate word of deaths from the new air strikes in Mekele, reported by Kindeya Gebrehiwot of the Tigray external affairs office and confirmed by a resident and a humanitarian worker. One resident said five people were injured, speaking on condition of anonymity for fear of retaliation.

“Indeed there have been air strikes in Mekele today,” Ethiopian government spokesperson Legesse Tulu said, adding they targeted facilities at the Mesfin Industrial Engineering site that Tigray forces use to make and repair heavy weapons.