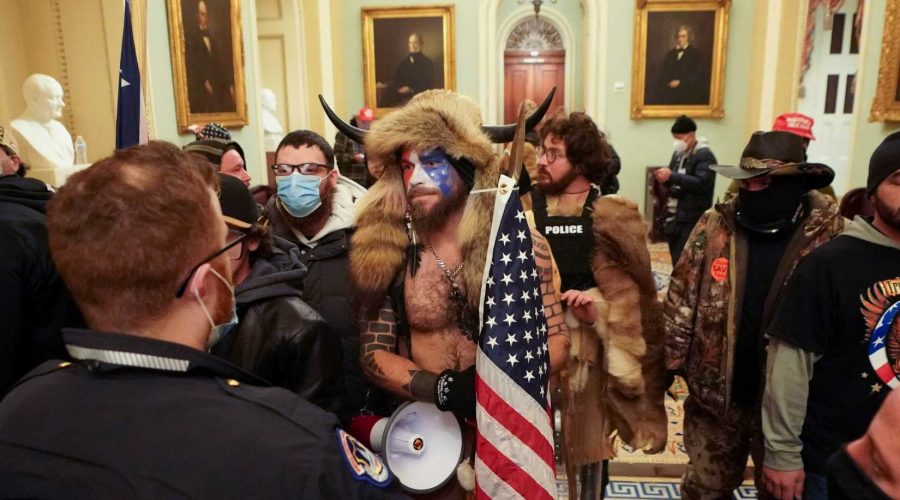 Dozens of people have been charged following the storming of the Capitol on Wednesday, with the FBI asking the public to help identify participants, given the proliferation of images of the riots on the internet. 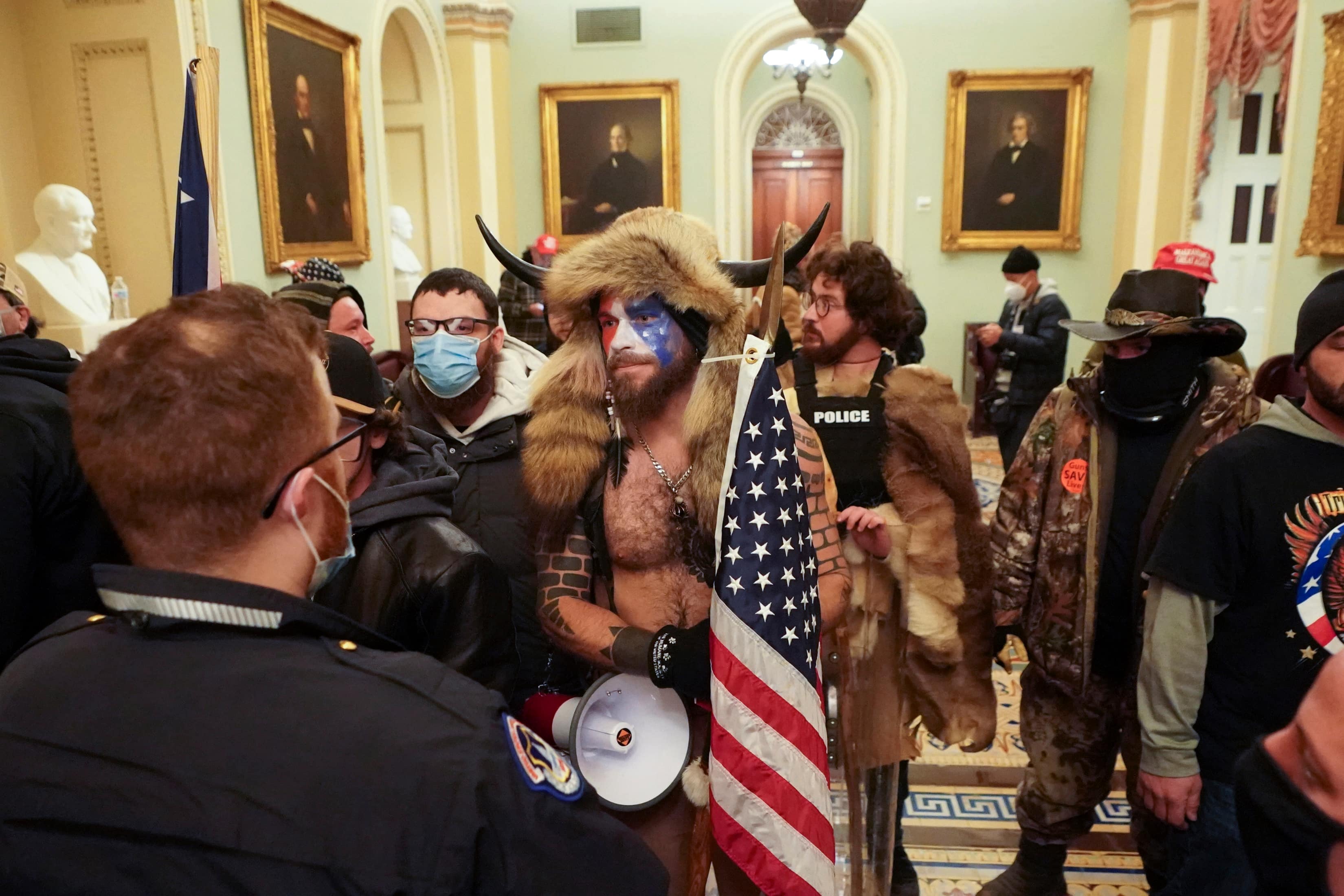 Federal agents arrested two more Capitol Hill rioters whose images had gone viral, of one carrying off the House speaker’s lectern and another who wore horns and a fur pelt, while a top Democratic lawmaker called on mobile carriers to preserve social media content related to the carnage.

Dozens of people have been charged following the storming of the Capitol on Wednesday, with the FBI asking the public to help identify participants, given the proliferation of images of the riots on the internet. Five people have died, including a police officer.

Jacob Anthony Chansley, who featured prominently on social media wearing horns, a fur pelt, face paint and brandishing a spear adorned with the U.S. flag, turned himself in to police, the Department of Justice said.

Chansley, also known as Jake Angeli, called the FBI’s Washington office on Thursday and later told agents “he came as part of a group effort with other ‘patriots’ from Arizona, at the request of the President that all ‘patriots’ come to D.C. on Jan. 6,” the DOJ said in a release.

Federal agents also arrested Adam Christian Johnson, whose photo as he smiled and waved as he carried off House of Representatives Speaker Nancy Pelosi’s lectern also went viral. Johnson, of Parrish, Florida, also streamed live video on Facebook of himself as he walked the halls of the Capitol, according to the Tampa Bay Times.

The video has been removed from online platforms and all of Johnson’s pages have been taken down.

On Saturday Senator Mark Warner, a Democrat who is the incoming chairman of the Senate Intelligence Committee, wrote to the chief executives of 11 mobile carriers and social media companies, urging them to preserve content and associated meta-data connected to the riot, which erupted as lawmakers gathered to certify the election of Democratic President-elect Joe Biden.

In his letters, Warner emphasized how the rioters took time to document the event and share it through social media and text messages “to celebrate their disdain for our democratic process.”

Before his arrest, NBC network reported, Chansley gloated about how the crowd infiltrated the Capitol, forcing lawmakers to flee.

“The fact that we had a bunch of traitors in office, hunkered down, put on gas masks and retreat to their underground bunker, I consider that a win,” he said to NBC News.

Media reports said Chansley had often been seen at rallies supporting Trump. Efforts by Reuters on Saturday to reach his relatives were unsuccessful, as were attempts to contact Johnson’s family.

It was unclear where Chansley was being held Saturday, or whether he or Johnson had legal representation.

Johnson, who has a first appearance in federal court on Monday, is being charged out of Washington.

One man who was arrested in connection with the events at the Capitol and threats to lawmakers told FBI agents he arrived in Washington on Thursday, a day late for the rally, after being delayed en route in Ohio, federal court documents showed.

Cleveland Meredith was found with a Tavor X95 assault rifle, a Glock pistol, and hundreds of rounds of ammunition, and was detained in connection with making threats to Pelosi after an FBI agent read Jan. 7 text messages in which Meredith talked about “putting a bullet in her noggin on Live TV” and running her over with his truck, according to a criminal complaint.

At least a dozen other people were facing criminal charges in U.S. District Court for the District of Columbia in connection to the riot, and at least another 40 people faced lesser charges in the District of Columbia Superior Court, a local venue. Many of them were arraigned on Thursday and released, with an order from the judge not to return to Washington unless for court appearances or meetings with their attorneys.

They included Richard Barnett, the Gravette, Arkansas, man who was photographed sitting at Pelosi’s desk, his feet up on the furniture.

Nicholas Ochs, self-professed leader of the Hawaii chapter of the far-right Proud Boys group and who made a failed bid for a seat in the Hawaii House of Representatives in November, was arrested on his return to Honolulu and charged with unlawful entry into restricted buildings or grounds, federal prosecutors said in a statement. It was not immediately clear whether he had a lawyer.

Among those arrested Friday for participating in the riot was West Virginia House of Delegates member Derrick Evans, who announced his resignation on Saturday in a one-line statement.

Evans, who had just been elected in November and on his campaign website had promoted himself as “a Pro Trump conservative who will always stand up, speak out, and Fight For Christian Values,” live-streamed himself entering the Capitol on Wednesday, and was recorded saying, “We’re in, we’re in! Derrick Evans is in the Capitol,” the Justice Department said in a release.

The FBI and the Washington police department’s homicide unit are jointly investigating the death of Capitol Police Officer Brian Sicknick, who was injured while defending the Capitol. Sicknick had just been sworn in with the U.S. Capitol Police Department, fulfilling a lifelong dream.

Steven D’Antuono, the FBI Washington Field Office’s assistant director in charge, said on Friday that rioters who had since returned home were not safe from arrest.

“Just because you’ve left the D.C. region, you can still expect a knock on the door if we find out you were part of the criminal activity at the Capitol,” D’Antuono said.