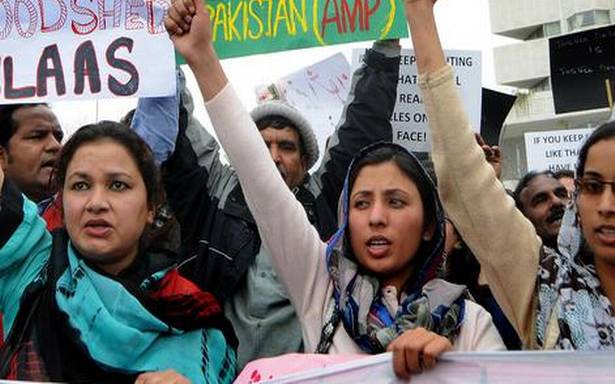 At least 1,472 people were charged under the blasphemy law in Pakistan since 1987.

Islamabad A mob, wielding batons and iron rods, has attacked a police station here in the Pakistani capital in an attempt to lynch a man detained on a charge of blasphemy, according to a media report.

Also read: Despatch | In the name of God

Dozens of villagers attacked the Golra Police Station in Islamabad, asking the officials for the custody of the suspect held for investigation into a complaint lodged against him on a blasphemy charge, the Dawn newspaper reported.

Within minutes of law enforcers bringing the suspect to the police station, scores of people gathered at the station gate. The mob forced their way in after overpowering the guards.

The crowd started damaging the offices of the ‘moharrar’ (police cleric), investigating officers and the Station House Officer. Such incidents in the past have led to the lynching of blasphemy accused persons.

During the attack, the policemen tried to protect themselves as well as the suspect by locking themselves up in the lock-up and other rooms. They contacted a nearby police contingent for help.

Police reinforcement, including personnel of the counter-terrorism department, anti-terrorist squad and anti-riot unit, reached the spot and rescued their colleagues.

The confrontation between the villagers and the police went on for well over an hour.

It was not confirmed how many policemen were injured in the attack. While there was a complete blackout in the police station and its vicinity, the police shifted the man suspected of committing blasphemy to an undisclosed location under strict security.

The police cordoned off the locality and various police teams were patrolling the area on foot, while all routes leading to the police station were sealed.

Assistant Inspector General of Police Mohammad Usman Tipu said details on the attack on Golra Police Station would be shared after the situation calms down in the area.

The details on the man accused of blasphemy were not made available.

Pakistan’s controversial blasphemy laws and their prescribed punishments are considered extremely severe. At least 1,472 people were charged under the blasphemy law in Pakistan since 1987.

People accused of blasphemy are usually deprived of the right to a counsel of their choice as most lawyers refuse to take up such sensitive cases.

The blasphemy laws are colonial-era legislation but they were amended by former dictator General Ziaul Haq which increased the severity of prescribed punishments.