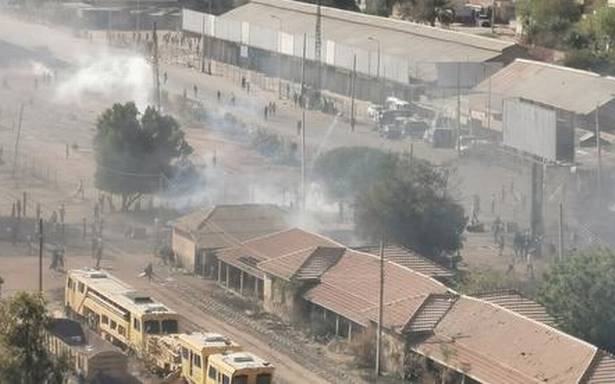 Three more people were killed in Sudan, a medical group said, as thousands of people once again took to the streets of the capital and other cities Monday in relentless protests that have rocked the country since a military coup three months ago.

The fatalities brought the death toll among protesters to at least 76 since the military takeover on October 25. The fresh crackdown will likely complicate U.N. efforts to find a way out of the country’s crisis.

Protesters, mostly young people, marched in the streets of Khartoum and its sister city of Omdurman Monday, according to the pro-democracy movement. There were also protests elsewhere in the country, including the provinces of Kassala, Red Sea, Jazira and the already restive Darfur region, the movement said.

Activists said security forces fired live ammunition and tear gas to disperse protesters in several locations in the capital, including around the fortified presidential palace. Protest marches were violently dispersed elsewhere in Omdurman, they said.

“I’m out in the protest today like I did in all protests before and I will continue to do until we have the civilian government,” said Khartoum protester Mona Kassem who took part in Monday’s marches.

The Sudan Doctors Committee said security forces killed two protesters in Khartoum— one shot in the chest and a second in the head.

A third protester was killed, shot in the head and shoulder, in Madani, the capital city of Jazira province, about 135 kilometers (85 miles) southeast of Khartoum, the medical groups said.

There was no immediate comment from the military-led government.

The coup has upended Sudan’s transition to democratic rule after three decades of repression and international isolation under autocratic President Omar al-Bashir. The African nation has been on a fragile path to democracy since a popular uprising forced the military to remove al-Bashir and his Islamist government in April 2019.

Since the coup, at least 76 people have been killed and hundreds of others wounded in the protests, the medical group said. There were also allegations of sexual violence, including rape and gang rape, in a Dec. 19 protest in Khartoum, according to the United Nations.

Sudan has been politically paralyzed since the coup. The turmoil has worsened since the resignation this month of Prime Minister Abdalla Hamdok, who complained of failure to reach a compromise between the generals and the pro-democracy movement.

Hamdok had been reinstated in November in a deal with the military that angered the pro-democracy movement.

The U.N. mission has in the past two weeks been consulting with rival Sudanese factions in efforts to bridge the gap between the generals and the pro-democracy movement.

The protests call for a fully civilian government to lead the democratic transition. The generals have rejected that demand, saying they will only hand over power to an elected administration. Elections are scheduled in July 2023.