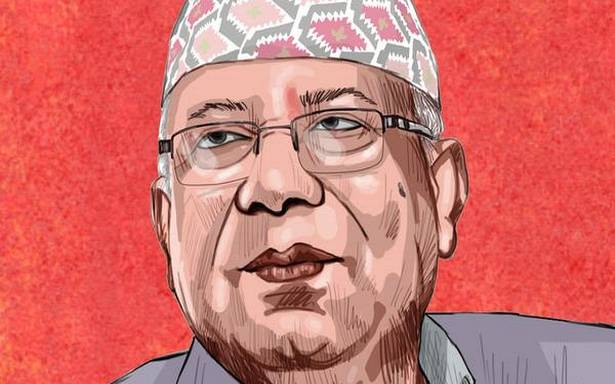 If Madhav Kumar Nepal goes on to lead a new political outfit, formed after a vertical split of the Communist Party of Nepal-Unified Marxist-Leninist (UML), as reported in The Hindu on March 31, it would mark the end of a long journey with the party that he was associated as a general secretary for a decade and a half and as a single-term Prime Minister of Nepal. The circumstances leading to this decision were not atypical of Nepal’s polity or the vicissitudes of communist party politics, but Mr. Nepal would certainly be leaving the UML with his rival and current Prime Minister K.P. Sharma Oli in a much stronger position than he had expected after the Supreme Court on February 23 had overturned Mr. Oli’s decision to dissolve Parliament in December 2020.

In a quirk of fate, the Supreme Court followed that decision with another one on March 7 that de-recognised the unified Nepal Communist Party (NCP) and reverted it to its two composite units before merger — the Oli-led UML and the Communist Party-Maoist Centre (led by Pushpa Kumar Dahal). This set the cat among pigeons once again.

In the unified NCP, the factions that were pitted against each other transcended the UML-Maoist divide. Mr. Oli’s supporters included former Maoist leaders such as Ram Bahadur Thapa and a clutch of other former UML leaders, while the dissident wing included Mr. Dahal, along with Mr. Nepal and former UML general secretary and ex-Prime Minister Jhalanath Khanal.

When Mr. Oli had unilaterally dissolved Parliament (with the President’s concurrence) and had sought fresh elections, the Dahal-Nepal faction led protests and were joined in opposition to the move by other parties. The NCP was split vertically with the Dahal-Nepal faction retaining an edge in the restored Parliament, even as this divide carried over to the provinces where the NCP was in power. But the revocation of the party name by the Supreme Court changed the equations.

Mr. Nepal and Mr. Khanal were back in the UML, while Mr. Dahal had to revert to reconstituting the smaller Maoist Centre. As things stand, reports indicate that the Nepal-Khanal faction has the support of more than half of the UML’s Central Committee, but less than 40% of the parliamentary members — the magic figure that will allow Mr. Nepal to split the party as per the Political Parties Act, 2017.

Mr. Oli’s prestige might have diminished after the Supreme Court’s chastening, but his power seems to have substantially restored in the UML, allowing him to include former Maoist leaders such as Mr. Thapa in the party over the dissidence of Mr. Nepal and others. What was a stable parliamentary set-up with the NCP in power with a substantive majority has now been reduced to a limbo akin to what was commonly the case in the long periods of instability since the country transitioned from absolute monarchy in 1990.

If Mr. Nepal goes ahead and splits the party, irrespective of the consequences (such as losing his Parliament seat), Mr. Oli will still find it difficult to gain the support to form a majority government and that is what seems to lead to a protracted game of chicken between him and Mr. Nepal.

Ever since his All Nepal Communist Revolutionary Coordination Committee (Marxist-Leninist) (one of the many small communist outfits that were inspired by the Naxalbari revolt in India) merged into the Communist Party of Nepal (Marxist-Leninist) in 1978, Mr. Nepal has held a senior position in both the merged outfit and later, the consolidated UML.

The UML was led by Madan Bhandari during the period of transition into a multi-party democracy. Mr. Bhandari and Mr. Nepal played a significant role in changing the ideological position of the party in accepting “people’s multi-party democracy” that abandoned the idea of a communist vanguard to promote a democratic multi-party system. Following Mr. Bhandari’s death in a jeep accident in 1993, Mr. Nepal took a prominent role in the UML and steered the party through a long period of moderation of its ideology and adoption of flexible political positions — which included being in coalition governments with royalist parties such as the Rashtriya Prajatantra Party.

After a gruesome civil war led to the emergence of the Maoists as a major political force, and following the usurping of power by the monarchy, Mr. Nepal was among the key leaders who forged first the seven-party alliance, including the Nepali Congress, the UML and others, and followed it with the eight-party alliance with the Maoists on board. This ultimately led to the downfall of the monarchy and the first Constituent Assembly (CA) elections in 2008. But Mr. Nepal, along with other senior leaders such as Mr. Oli, suffered humiliating defeats as the UML emerged as the third largest party after the Maoists and the Nepali Congress. Mr. Nepal had to resign his post and was nominated to the CA after this loss, but skilfully emerged as the Prime Minister in 2009 after being supported by the Nepali Congress in a bid to prevent the Maoists from getting back to power.

Mr. Nepal and Mr. Khanal enjoyed small stints as Prime Ministers during the first iteration of the CA that ended in a deadlock following the inability of the parties to agree on the issue of federal state restructuring. Mr. Oli’s strident opposition to the demands of the plain dwelling Madhesis for a more thoroughgoing federalism and his recourse to Nepali jingoism against what was perceived as Indian interference in the Constitution making process allowed him to gain primacy as a face of status quoist forces in the UML, which emerged as second largest party in the second CA elections in 2013 behind the Nepali Congress.

Mr. Oli went on to further consolidate his leadership of the UML and the turn of events following the merger of the UML with the Maoist-Centre brought Mr. Nepal and Mr. Khanal closer to the former Maoists. If the Nepal-Khanal faction creates a new party taking on Mr. Dahal and his supporters, it remains to be seen how it will differentiate itself ideologically from Mr. Oli’s outfit. But if his history is any clue, it won’t be a surprise if Mr. Nepal manages yet another unity of disparate forces for power.