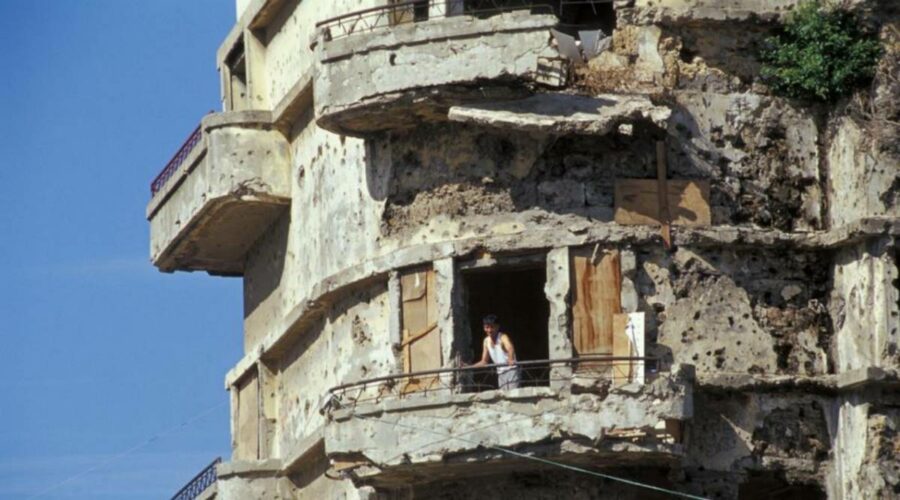 The Lebanese currency has lost up to 90% of its value, and prices are soaring. Most Lebanese are fighting a daily battle for survival and only a few profit from the skyrocketing exchange rates for the US dollar.

Long queues outside gas stations, empty shelves in pharmacies and often more than 20 hours of power outages a day — the situation in Lebanon was grim even before the Central Bank decided to lift the subsidies for fuel imports this week.

Signs of the crisis are easy to spot everywhere in Lebanon: The elderly woman who asks for money in the evening — she doesn’t seem like one who ever had to beg in her life. The cab driver who had to give up his cat because he could no longer afford to feed it. The woman who wanted to buy yogurt in the store and changed her mind after she heard the price.

The crisis doesn’t affect everyone equally

Since the exchange rate of the Lebanese pound was pegged to the US dollar in 1997 (1 US dollar = 1,507 Lebanese pounds, also referred to as Lebanese lira), and, until 2019, Lebanon’s currency had been fairly stable.

But since the economic crisis hit in late 2019, the pound has lost about 90% of its value. Currently, $1 is sold for 23,000 Lebanese pounds on the black market. This means that nowadays having dinner in a good restaurant is the equivalent of just a few US dollars. A ride in a cab? Between 40 cents and $2.

However, the Lebanese hyperinflation does not affect everyone to the same extent; those who have access to US dollars even benefit.

“People who have access to US dollars, either from the outside or from the inside through the black market, are able to live a lifestyle beyond their original means,” Bassel Salloukh, a political scientist at the Lebanese American University in Beirut, told DW.

However, few people have access to “fresh cash,” or money that hasn’t been invested before, and in Lebanon’s particular case, it also means the transfer of US dollars from abroad. For example, those who rent apartments. The currency is in such high demand that most property owners demand rent in dollars — and that’s forcing many tenants to move out.

Yara is one of the few people with access to fresh dollars. The young woman, who, like other interviewees, requested anonymity, has a job with an NGO and receives her salary in cash and in US dollars. Although this allows her to afford much more than those who earn their salaries in Lebanese pounds, she doesn’t feel particularly good about it. “Even if I go to an expensive place, I make sure not to post it on social media.”

Still, Yara has also suffered from the crisis. She lost a large part of her savings since it is impossible to withdraw dollars from banks. Every time, Yara withdraws dollars from her savings account, the sum is automatically converted into Lebanese pounds, at the fixed bank exchange rate of 3,900 pounds. This means that her savings are now worth only a fraction of what she deposited.

Development aid organizations are not excluded either. They have to exchange their aid payments at another unfavorable exchange rate set by the government — currently 15,000 pounds. According to a report by Reuters news agency, they have already lost $250 million that were supposed to be earmarked for refugee aid and poverty alleviation in Lebanon.

Political scientist Bassel Salloukh expects the crisis to drastically change Lebanese society. Many people have already moved from the cities back to the villages because they could no longer afford to live in Beirut. Unprecedented numbers of people are trying to leave the country altogether, especially well-educated people.

On the other hand, the informal economy is booming.

“A lot of people who did not work or make much money before the crisis have invented new jobs for themselves,” Salloukh told DW. “They sell fuel in the black market or help you find medicine when you cannot find it — if you are willing to pay for it.”

Those who manage to profit from the situation, however, are a small minority, he said, adding: “The rest of the population is going through a horrible meltdown.”

Vegetarian diet out of necessity

“We are just surviving like this,” says Marwa. She lives with her husband and 8-year-old daughter in an apartment in Dahieh, a southern suburb of Beirut. “I’m afraid to think about the future. We live from one day to the next. Maybe tomorrow I won’t be able to go on, maybe the day after tomorrow.”

A few days ago, Marwa’s daughter had a bad stomachache. But when Marwa took her to the pharmacy, the pharmacist claimed he had no suitable medicine. Marwa became angry, her daughter doubled over in pain. Finally, the pharmacist handed over medicine to the stunned mother.

Economists are not surprised. Gas stations and pharmaceutical suppliers are known to hoard gasoline and medicine. The reason is simple: They are waiting for prices to rise further so that they can then sell their goods at an even higher price.

Marwa’s husband works as a wedding planner, earning 1,100,000 Lebanese pounds a month. Two years ago, this was the equivalent of $730 — today it is less than $60. The biggest share of this is needed for rent and the electricity generator, leaving hardly any money for food.

“I used to buy a kilo of rice for 2,000 Lebanese pounds. Now the kilo costs at least 15,000 pounds,” says Marwa. The last time they had cutlets or chicken for dinner was a long time ago. Now she mostly cooks rice and lentils from food packages provided by aid organizations.

Since the fall of 2019, Lebanon has been sliding deeper and deeper into an economic crisis. The hyperinflation led to multiplied prices for food and products. Lebanon’s gross domestic product has plummeted from $55 billion in 2018 to $33 billion in 2020, according to a World Bank report.

“Such a brutal and rapid contraction is usually associated with conflicts or wars,” the report states.

So far, there is no conflict or war in Lebanon, and yet, the Lebanese government hasn’t started to introduce sustainable steps or reforms to put a hold on the crisis.

08/13/2021 World Comments Off on Lebanon: Dollars shield some from hyperinflation crisis
India