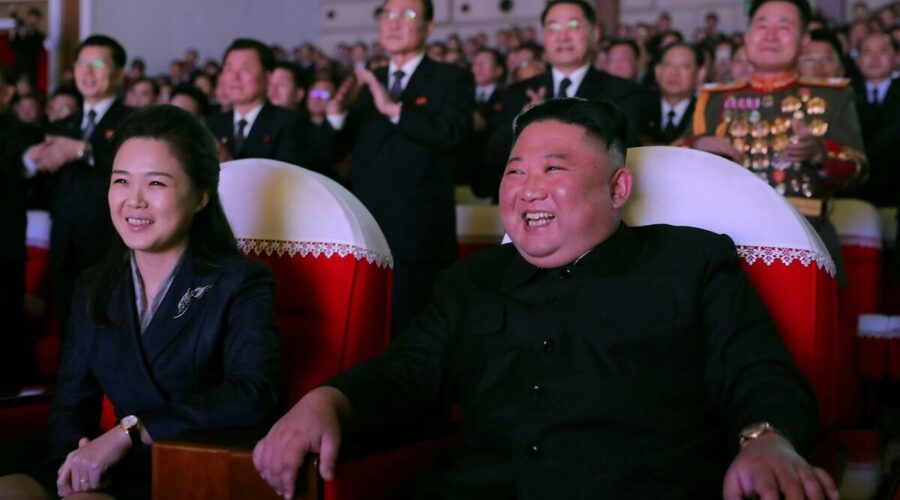 Ri, thought to be 32, may have been sidelined due to the coronavirus, which virtually ended international visits and the need to appear by her husband’s side at events part of a normal nation’s statecraft, specialist service NK News reported in late January. The wife of North Korean leader Kim Jong Un made her first public appearance in a year, ending an unusual absence that stoked speculation about her condition.

Ri Sol Ju joined her husband at a musical performance for the anniversary of the birth of former leader Kim Jong Il, which is known as the Day of the Shining Star in North Korea, the official Korean Central News Agency reported Wednesday.

“As the General Secretary came to the auditorium of the theater together with his wife Ri Sol Ju amid the welcome music, all the participants burst into thunderous cheers of “Hurrah!,” KCNA said. They were treated to songs including “People Are of a Single Mind,” and photos of the couple were splashed on the front page of the state’s largest newspaper — Rodong Sinmun.

Ri, thought to be 32, may have been sidelined due to the coronavirus, which virtually ended international visits and the need to appear by her husband’s side at events part of a normal nation’s statecraft, specialist service NK News reported in late January.

Her first mention on KCNA came in 2012, about half a year after her husband took over as leader, and her name has appeared on the official news agency about 200 times since then, according to a NK News database search. The yearlong drought was by far the longest stretch she hasn’t appeared in state media during that time. North Korea has given no explanation for her absence.

“If her prolonged absence was due to concerns about the coronavirus, her reappearance could suggest increased regime confidence in the country’s quarantine situation,” said Rachel Minyoung Lee, an independent political analyst who used to work for the U.S. government in areas related to North Korea.

South Korea’s spy agency told lawmakers Tuesday Ri may have been taking care of the couple’s children and avoiding public exposure during the coronavirus pandemic, Kim Byung-kee, a ruling Democratic Party lawmaker, said after a meeting of a parliamentary intelligence committee.

The agency also said North Korea hacked Pfizer Inc. for information on its Covid-19 vaccine and treatments. North Korea says it has not had a single coronavirus infection, but the claim is doubted by the U.S., Japan and others.

Within North Korea, there was speculation she may have taken ill, taking care of a member of the Kim family who had gotten sick or staying at home to prepare her youngest daughter to start school, Daily NK, a Seoul-based website that gathers information from informants inside the isolated nation, reported.

The state of Kim’s health and his family are among the most closely guarded secrets in the highly secretive state, known only to a few people in Kim’s inner circle.

Ri, a former singer who as a teenager served in a North Korean cheerleading squad, has appeared with her husband for a summit in China, where the couple sat down for a meal with President Xi Jinping and his wife. Ri also joined Kim as they rode horses through the snow on North Korea’s Mount Paektu, the symbolic seat of Kim family rule over the country.

South Korean intelligence said the two married in 2009. They are thought to have three children, but there is no official mention of their offspring. Dennis Rodman, the offbeat basketball great who visited Kim in North Korea, said in 2013 he held the leader’s baby girl in his arms, a daughter named Ju Ae.