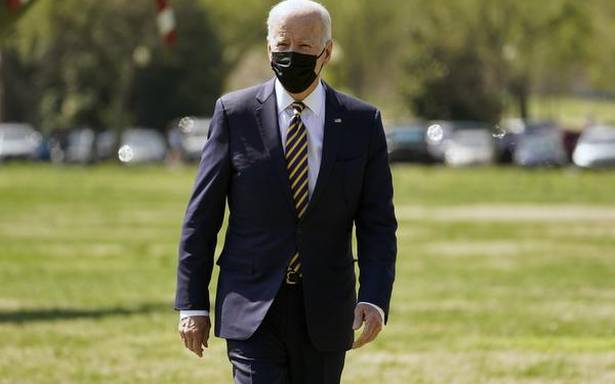 Joe Biden said that he is going to push as hard as he can to change the circumstances so the U.S. can compete with the rest of the world

U.S. President Joe Biden has exuded confidence that his proposal to hike the corporate tax is unlikely to drive companies out of the country.

Mr. Biden made the comments on April 5 while talking to reporters on the South lawns of the White House as he arrived from his weekend stay at Camp David.

“Not at all,” Mr. Biden said, asserting that there is no evidence of that.

“The tax was 36%. It’s now down to 21%. And the idea … that’s bizarre. We were talking about a 28% tax that everybody thought was just fair enough for everybody,” he said.

“The idea … here you have 51 or 52 corporations of the Fortune 500 haven’t paid a single penny in taxes for three years. Come on, man. Let’s get real,” Mr. Biden said in response to a question.

Mr. Biden said that he is going to push as hard as he can to change the circumstances so the U.S. can compete with the rest of the world.

“Everybody around the world is investing billions and billions of dollars in infrastructure, and we’re going to do it here,” he added.

U.S. Treasury Secretary Janet Yellen told Chicago Council on Global Affairs that it’s important to work with other countries to end the pressures of tax competition and corporate tax-based erosion.

“We’re working with G20 nations to agree to a global minimum corporate tax rate that can stop the race to the bottom. Together, we can use a global minimum tax to make sure that the global economy thrives based on a more level playing field in the taxation of multinational corporations, and spurs innovation, growth, and prosperity,” she said.

According to Ms. Yellen, one of the consequence of an interconnected world has been a 30-year race to the bottom on corporate tax rates.

“Competitiveness is about more than how U.S. headquarters–headquartered companies fare against other companies in global merger and acquisition bids. It’s about making sure the governments have stable tax systems that raise sufficient revenue to invest in essential public goods and respond to crises, and that all citizens fairly share the burden of financing government,” she said.

White House Press Secretary Jen Psaki told reporters that the corporate tax rate being proposed is lower than it was in 2017.

“In fact, it’s lower than it was from World War Two until 2017. So we are still proposing a rate that is lower than it has been for the vast majority of time,” she said.

In her address to the Chicago Council, Ms. Yellen said a personal objective of her is to focus on America; international engagements on fostering full legal rights and greater economic and education opportunities for women and girls, given the clear evidence that this will support inclusive economic growth more broadly.

“Speaking from my own experience, we need to do better at reducing barriers for women’s economic empowerment, even unconscious ones, in nearly every country in the world, including the United States,” she said.

The most evident immediate example is the need to address global health risks. COVID-19 has clearly shown that pandemic responses require global cooperation. “We’re working with our partners to enhance pandemic preparedness against future shots. We need to learn lessons from this pandemic to be better prepared to stop future contagious diseases before they become full-scale pandemics,” she said.

04/06/2021 World Comments Off on Joe Biden confident that higher corporate tax will not drive companies out of U.S.
India