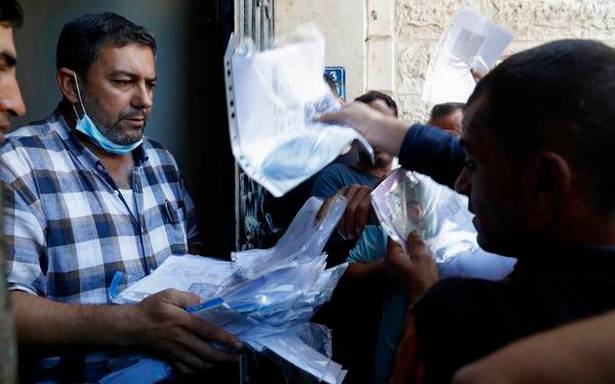 Now, the total number of work permits issued to Palestinian workers from Gaza Strip is increased to 10,000.

Israel will increase the number of Palestinian workers it permits to enter its territory from the Gaza Strip, an Israeli defense body announced on Wednesday, a gesture seemingly meant to bolster a fragile calm between the sides.

Gaza’s more than 2 million Palestinian residents have lived under a stifling Israeli-Egyptian blockade since the Islamic militant group Hamas seized power from rival Palestinian forces in 2007, and unemployment and poverty is rampant. Israel says the closures are needed to contain the militant group, while critics view it as a form of collective punishment.

COGAT, the Israeli defense body in charge of Palestinian civilian affairs, said an additional 3,000 Gazans will be allowed into Israel to work, bringing the total of recently announced new permits to 10,000. COGAT said the decision was “conditional upon the continued preservation of the region’s security stability for the long term."

Israel and Hamas fought a brutal war in May, their fourth major conflagration since 2008. Hamas has demanded the easing of the blockade as part of an informal cease-fire brokered by Egypt. Israel has lifted some restrictions since the end of the 11-day May war while warning that any broader easing depends on continued calm.

Half of Gaza’s population lives in poverty, travel outside the territory is heavily restricted, tap water is undrinkable and residents experience daily power outages that can last several hours. Nearly 40,000 houses were damaged or destroyed in the most recent war, according to the Ministry of Public Works.

Tens of thousands of Palestinians from the occupied West Bank also work in Israel, where wages are much higher, mainly in construction and agriculture.

A few thousand senior businessmen retained their entry permits to Israel, and in recent years, Israel has quietly expanded that program to allow Palestinians from Gaza to work in construction, agriculture and manufacturing.