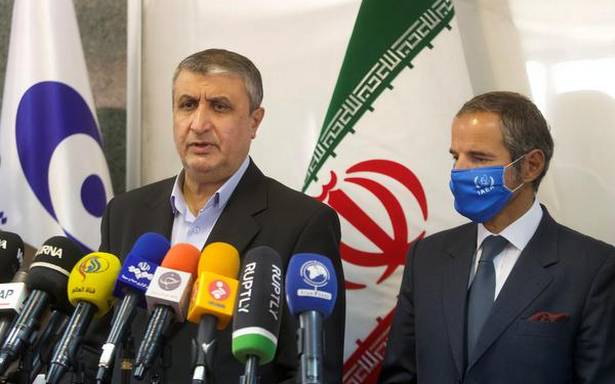 Iran agreed on Sunday to allow international inspectors to install new memory cards into surveillance cameras at its sensitive nuclear sites and to continue filming there, potentially averting a diplomatic showdown this week.

The announcement by Mohammad Eslami of the Atomic Energy Organization of Iran after a meeting he held with the Director-General of the International Atomic Energy Agency, Rafael Grossi, in Tehran still leaves the watchdog in the same position it has faced since February, however.

Tehran holds all recordings at its sites as negotiations over the U.S. and Iran returning to the 2015 nuclear deal remain stalled in Vienna. Meanwhile, Iran is now enriching small amounts of uranium to its closest-ever levels to weapons-grade purity as its stockpile continues to grow.

“I am glad to say that today were able to have a very constructive result, which has to do with the continuity of the operation of the agency’s equipment here,” Mr. Grossi said. It “is indispensable for us to provide the necessary guarantee and information to the IAEA and to the world that everything is in order.”

Mr. Eslami described the negotiations between Iran and the Vienna-based IAEA as “sheerly technical” without any room for politics. He said Mr. Grossi would return to Iran soon to talk with officials, without elaborating. Also left unsaid was whether Iran would hand over copies of the older recordings, which Tehran had threatened previously to destroy.

“The memory cards are sealed and kept in Iran according to the routine,” Mr. Eslami said. ”New memory cards will be installed in cameras. That is a routine and natural trend in the agency’s monitoring system.”

A joint statement released by the IAEA and Iran confirmed the understanding, saying only that “the way and the timing are agreed by the two sides.”

The announcement could buy time for Iran ahead of an IAEA board meeting this week in which Western powers had been arguing for Tehran to be censured over its lack of cooperation with international inspectors.