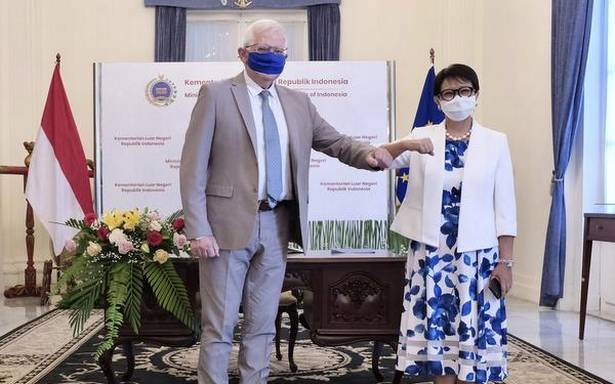 She reiterated a call for the safety of civilians as the ruling junta cracks down on opposition.

Indonesia’s foreign minister on Wednesday urged the Association of Southeast Asia Nations (ASEAN) to immediately appoint a special envoy on Myanmar in response to its military coup, and reiterated a call for the safety of civilians as the ruling junta cracks down on opposition.

After holding talks with EU foreign affairs chief Josep Borrell in Jakarta, Retno Marsudi said Indonesia is continuing to communicate with the ASEAN chair and other member countries following their demand for an immediate end to killings and the release of political detainees in Myanmar.

ASEAN leaders met in April in Jakarta with Myanmar’s coup leader, Senior Gen Min Aung Hlaing. They also agreed that a dialogue between parties in Myanmar should immediately start, with the help of the ASEAN envoy.

“The special envoy appointment must be completed immediately,” Ms. Marsudi said. “The safety and well being of the Myanmar people must continue to be a priority.” An Indonesian diplomat familiar with the Myanmar issue said on Wednesday that Brunei, which currently holds ASEAN’s rotating chairmanship, will send Second Foreign Minister Erywan Yusof to meet the junta on Saturday.

The diplomat, who spoke on condition of anonymity because he was not authorised to speak to the media on the issue, said the visit is aimed at seeking Myanmar’s approval of the ASEAN envoy.

Myanmar is a member, and traditionally members of the bloc have refrained from interfering in each other’s affairs amid criticism that its divisions and alignment with either the U.S. or China are weakening its position.

He said that naming the envoy involves both sides in Myanmar, making progress in the process slow.

According to Myanmar’s Assistance Association for Political Prisoners, which has kept a detailed tally of arrests and deaths since the February military takeover, 818 protesters and bystanders have been killed by security personnel since the coup. More than 4,300 people are in detention, including 104 who have already been sentenced.

Min Aung Hlaing said in an interview last week with Hong Kong-based Phoenix Television that the death toll had been exaggerated and was actually about 300, and that 47 police had been killed and more then 200 injured.