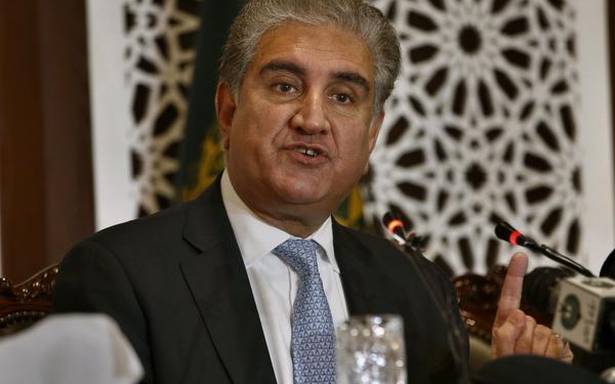 With India stepping up its diplomatic activities in Afghanistan’s peace process as the U.S. prepares for the troops withdrawal, a jittery Pakistan has said that at times it feels that New Delhi’s presence in the war-torn country is perhaps "larger than it ought to be".

“But at times we feel that their presence is perhaps larger than it ought to be because they…don’t share a border with you,” he said, according to the excerpts of the interview posted by the news channel on its Twitter handle.

When asked whether India’s presence in Afghanistan bothers Pakistan, Mr. Qureshi said, "Yes, If they use your (Afghan) soil against us, it bothers me." Asked how India is using Afghan soil for anti-Pakistan activities, he alleged: "Yes, they are…By carrying out terrorist activities." During the interview, Mr. Qureshi also sought to absolve the Taliban for the spike in violence in Afghanistan, saying it would be an "exaggeration" to blame the insurgent group for the bloodshed.

"Again, if you try and create this impression that the violence is high because of the Taliban…again, that would be an exaggeration. Why do I say that? Aren’t there other elements over there who are playing the role of a spoiler?” On a question on the forces responsible for the violence, Mr. Qureshi said: “Daesh (the Islamic State), like forces within Afghanistan…who gain from the war economy, who want to perpetuate their power, who are not seeing beyond their nose and just want to hang on to power.” The Taliban and the Afghan government are holding direct talks to end 19 years of war that has killed tens of thousands of people and ravaged various parts of the country.

The intra-Afghan peace process began as the U.S. and the Taliban signed a landmark deal in Doha on February 29, 2020 following multiple rounds of negotiations to bring lasting peace in war-torn Afghanistan and allow US troops to return home.

India has been keenly following the evolving political situation after the U.S. signed the peace deal with the Taliban. The deal provided for the withdrawal of American troops from Afghanistan, effectively drawing curtains on America’s longest war.

India has been a major stakeholder in the peace and stability of Afghanistan. It has already invested close to $3 billion in aid and reconstruction activities in the country.

India has been supporting a national peace and reconciliation process which is Afghan-led, Afghan-owned and Afghan-controlled.

During his visit to Qatar, Mr. Jaishankar on Tuesday met U.S. special envoy Khalilzad in Doha and exchanged perspectives on the war-torn nation and the region. Mr. Khalilzad briefed him on the recent developments in Afghanistan.

The Minister also met senior members of the Qatari leadership and discussed the issue of Afghanistan among other matters as Doha is involved in the Afghan peace process.

India on Thursday said its vision for Afghanistan is driven by an approach of pro-development and pro-democracy and that it is for the Afghan people to judge each of their partners on the basis of past actions.

In early March, Mr. Jaishankar and Mr. Khalilzad spoke over the phone and discussed the developments pertaining to the Afghan peace talks.

In the same month, Mr. Jaishankar attended the 9th Heart of Asia Ministerial Conference in Tajikistan’s capital, Dushanbe, where he voiced ‘grave concern” over violence and bloodshed in Afghanistan and said that there is a need for a genuine ‘double peace’ in and around the war-torn country.

Mr. Jaishankar also said that India has been supportive of all the efforts being made to accelerate the dialogue between the Afghan government and the Taliban, including intra-Afghan negotiations.

06/18/2021 World Comments Off on India's presence in Afghanistan perhaps 'larger than it ought to be', says Pakistan
India