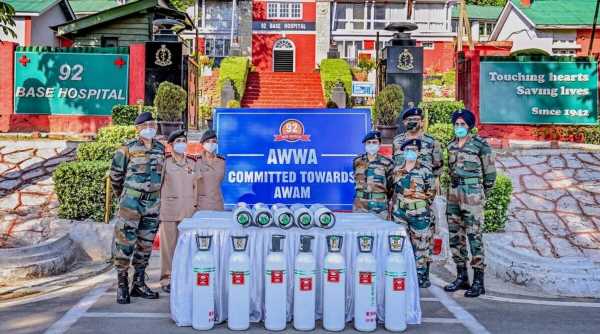 Indians in Korea (IIK) launched a fundraiser to procure oxygen cylinders to be sent to India. In two days, by May 11, the community collectively raised 7 million won (approx. $7,000). When the Covid-19 crisis in India worsened in April this year, like others in the diaspora, the Indian community in South Korea could only watch in despair. By the first week of May, the community began having serious discussions on what they could do, both individually and collectively, for their homeland.

Then, Covid-19 began hitting close to home, with members of the community hearing of family and friends in India falling sick and dying, increasing the urgency to help in whatever way possible. “An Indian student in South Korea whom I am close to, had to rush to New Delhi after his father fell ill due to Covid-19. He was running around to arrange an oxygen cylinder. When he got the cylinder, he had to run for an oxygen regulator. His father fought for two to three weeks but passed away. Even talking about it now is difficult,” said Vikram Dave, an Indian national who has been living in South Korea for close to a decade.

Around the time when Dave learned of the death of the student’s father, on May 7, India’s Ambassador to South Korea, Sripriya Ranganathan, held a meeting with Indian community leaders, along with South Korean and Indian companies and airlines like Korean Air, Asiana Airlines and Air India on how assistance could be provided to India. “Subsequently, the Embassy was approached by representatives of Indians in Korea (IIK), a community association of Indians in the Republic of Korea, who took the initiative to collect funds to purchase oxygen cylinders locally for use in India,” the Indian Embassy told indianexpress.com. Across South Korea, the Indian community has smaller groups depending on the state of origin of members, alumni groups of Indian educational institutions and other similar categories. While many Indian nationals in the country try to gather for major festivals, Dave said this was the first time that the community had come together this way for a common cause. They believed the most effective way to contribute would be by sending empty oxygen cylinders that could be reused and would help convert regular hospital beds to oxygenated beds.

Hours after the discussion with the Indian embassy, the community launched a fundraiser to procure oxygen cylinders to be sent to India. In two days, by May 11, the community collectively raised 7 million won (approx. $7,000), all deposited in a bank account that Sanjay Yadav, president of the ISKCON temple in Pocheon, had helped the community set up for this fundraiser.

The community isn’t very large in South Korea and population numbers are fluid because most Indians live in the country on temporary basis, either as students, white-collar workers or as undocumented migrants who leave the country after working for a few years in factories and restaurants. Some 80 people contributed to the fundraiser, Dave said, explaining how many Indians here don’t have disposable income to give to initiatives like these even if they wanted.

“We started personally calling people we knew across communities: be it the Marathi Mandal Korea, the Indian Overseas Students group, the Telugu Association. We spoke to community leaders to speak to their members to see who could donate and we started putting posts on all community groups,” said Dave, president of IndiansinKorea (IIK). Indians living in Seoul, Daegu, Busan and smaller university towns and cities across the country began contributing whatever little was possible. 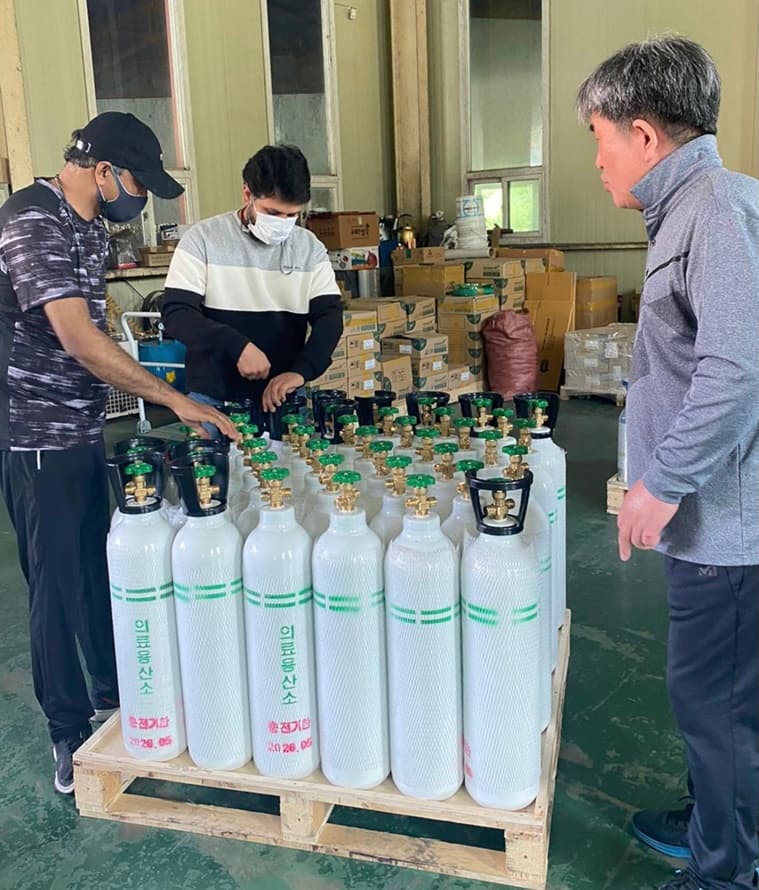 But this initiative was unprecedented in many ways, members of the community told indianexpress.com. “Usually, one community takes the lead and there is a clash over who is in charge. So they say, ‘we’ll do it on our own’,” said Dave. Those divisions melted away this time and the community leaders themselves have been surprised and overwhelmed at how everyone seamlessly came together to contribute.

The Marathi Mandal Korea, a community for Indians from Maharashtra, had initially donated some money to the state chief minister’s relief fund. “We diverted some funds to this initiative because it was an Indian community effort and Indian communities came together this time to generously donate,” said Amit Bhat, who has lived in Seoul for close to a decade and serves as an advisor to the Marathi community in the country.

The community leaders held discussions with the Indian embassy to understand where they could send these donations before deciding on AWWA, the Army Wives Welfare Association, headquartered in New Delhi, an NGO that works for the welfare of the spouses, children and dependents of Indian Army personnel. “The Defence Attache, Colonel Rakesh Kumar Mishra, said he would ask AWWA if they needed them for army hospitals. We thought that it was much better to send it to the Indian army,” said Dave.

“The Embassy officials got to know about the requirement of oxygen cylinders for army hospitals run by the AWWA. AWWA exhibited keen interest in accepting the cylinders which were procured by IIK using the voluntary contribution of its members, as it matched the technical specifications as desired by AWWA,” the Indian Embassy told indianexpress.com. A day after community leaders had collected the necessary funds, Dave used his lunch break to drive 42 km from his office in Suwon city to a cylinder manufacturer in Gwangju city in Gyeonggi province and paid $500 from the funds to block a consignment of 168 oxygen cylinders. The manufacturer agreed to store the cylinders till the community could navigate another major challenge—transporting it from South Korea to India.

As the community discovered while negotiating with various airlines to ship the consignment, the process is hardly straightforward when a group decides to ship high pressure oxygen cylinders. To start with, it is expensive, it is a lengthy process that requires a considerable amount of paperwork that needs to be approved by various Indian government agencies. “The freight cost was very high—approximately $7 to $8 per cylinder. Each cylinder weighs around 14 kg and we had 168 cylinders,” explained Dave.

That is when the Indian Embassy stepped in to extend help to the community.

“Since the cost of transporting these cylinders from Korea to India was exorbitant and well beyond the capacity of IIK, the Embassy requested the concerned authorities in the Government of India to carry these cylinders on a gratis basis in one of Air India’s cargo flights. In order to get the required approvals, the Embassy coordinated with the Ministry of External Affairs and Niti Ayog,” the Indian Embassy told indianexpress.com.

It took two weeks for the community to receive clearance for the shipment from Indian government agencies to be shipped on the next available flight on Air India, on May 30. The challenges weren’t over. The community had invested all funds into procuring the cylinders, and there was nothing left that they could use to pay for a truck to ship it from the manufacturer’s warehouse in Gwangju to Incheon International Airport. 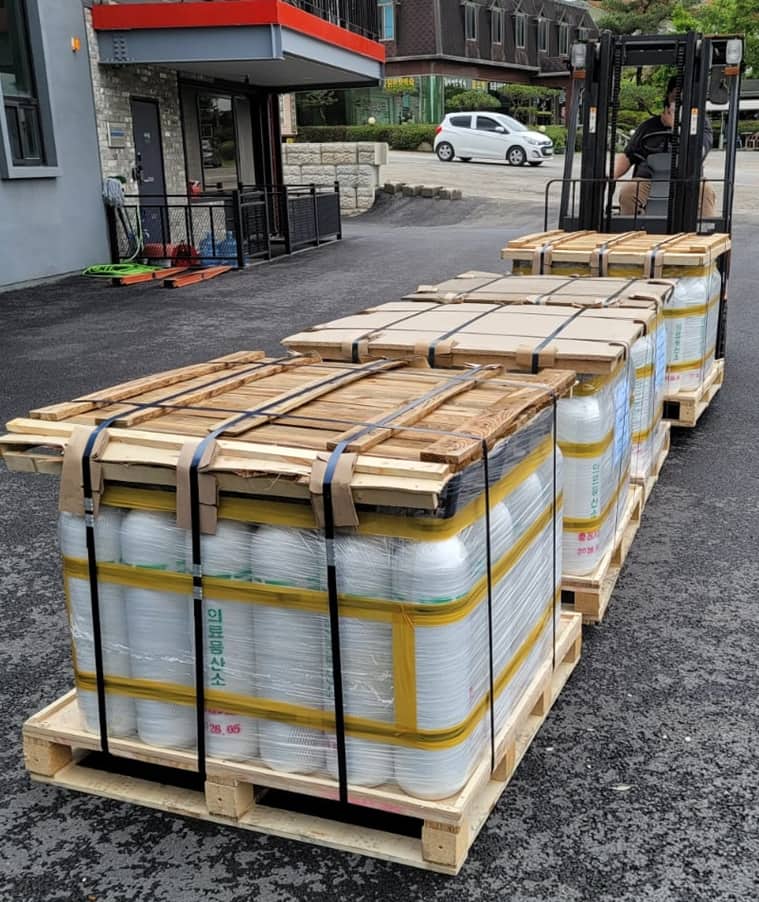 “The local manufacturer helped pay for the local transportation to the Incheon airport cargo facility, some 100 km away. The carrying and forwarding paperwork for cargo at Korea customs clearance would also cost money. Although the freight was taken care of by Air India, they needed the clearance paperwork to transport it to India. But these papers cost approximately $800-$1,000, so the Indian embassy considered our request and took it up and got it done,” explained Dave. 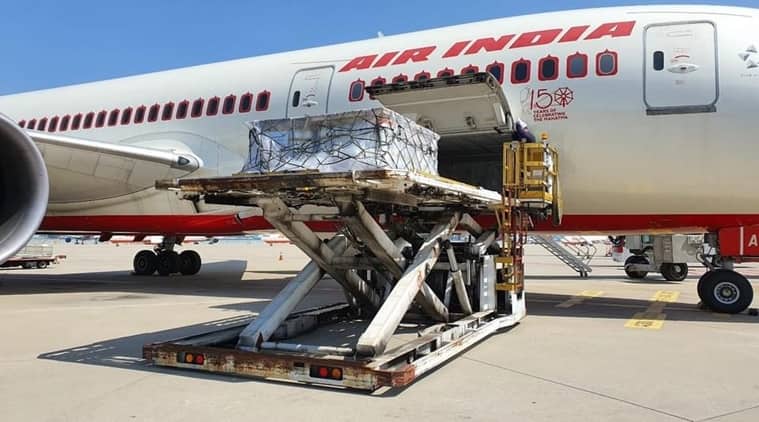 The shipment was loaded on a flight to New Delhi and was received by AWWA at Indira Gandhi International Airport on May 31. These oxygen cylinders will be dispersed primarily to army field hospitals in the Union Territory of Jammu and Kashmir and in Manipur. “AWWA is a large NGO that has tremendous reach due to its regional and zonal branches being spread across the length and breadth of the country. AWWA members are located in far flung and inaccessible areas thereby providing us a crucial insight into the requirement of relief material in these areas. They are also an important link in the delivery chain of relief material to these locations,” said Veena Naravane, president of AWWA, the wife of Indian Army Chief General M M Naravane. 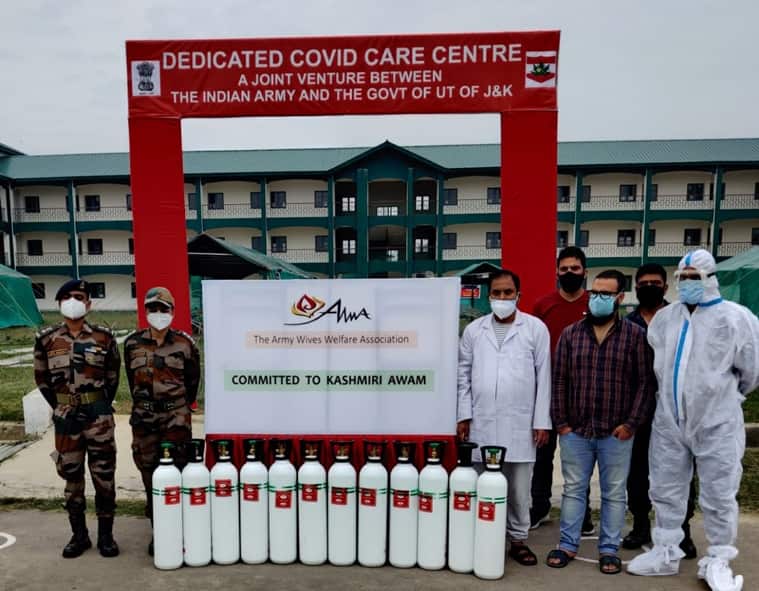 While oxygen cylinders have been specifically set aside to be sent to the UT of Jammu and Kashmir and Manipur, Naravane told indianexpress.com that depending on the requirements at remote locations in north and northeast India, the organisation will also consider sending the relief material to locations, particularly in the interiors, in central and south India.

In the four weeks of planning and implementation, the community has lost count of the phone calls and conversations they have had concerning the fundraising and the shipment. “The Indian embassy really went out of the way to support us as much as possible. There were so many calls between the embassy staff and us. We were concerned about the approvals not coming through and it is a miracle that we were able to get the cargo through Air India,” said Dave.

“Everybody in the community in Korea has lost someone due to Covid-19. Even in my family, there have been deaths,” said Bhat. “It wasn’t really one group’s effort. It was all Indians living in South Korea,” said Dave.

06/04/2021 World Comments Off on Indians in South Korea come together to ship oxygen cylinders back home; find it is anything but easy
India