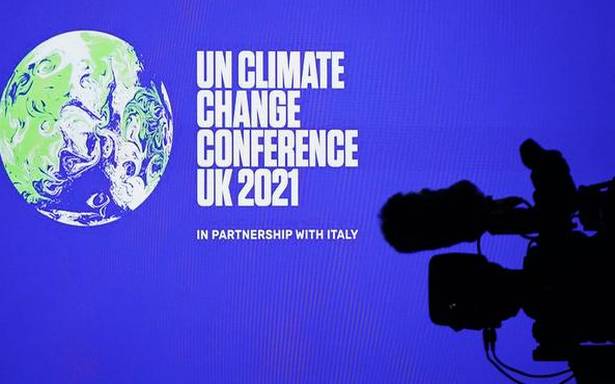 India last week said that climate finance cannot continue at the levels decided in 2009 and emphasised that it expects climate finance of one trillion U.S. dollars “at the earliest” in view of new commitments

India, speaking on behalf of the BASIC group, on November 8 warned that lack of a serious approach to climate finance will jeopardise the enhanced mitigation and adaptation ambition as well as net zero pledges of parties.

India last week said that climate finance cannot continue at the levels decided in 2009 and emphasised that it expects climate finance of one trillion U.S. dollars "at the earliest" in view of new commitments.

"Post 2020 mitigation ambition and net zero pledges require significantly enhanced climate finance. The exact magnitude of the new finance goal can be determined through a structured process, with clear timelines and milestones so that we have a new finance goal well before 2025," she said.

"It is a simple ask from many developing country parties. Yet, what we are getting is more workshops and in session seminars to discuss the new goal. BASIC would like to warn that lack of a serious approach to climate finance will jeopardize the enhanced mitigation and adaptation ambition as well as net zero pledges of parties,” she said.

Ms. Sharma said that in the interest of transparency and enhanced understanding, the BASIC countries also call for a mandate to SCF (Standing Committee on Finance) to work towards a multilaterally agreed, operational definition of climate finance.

The statement said that BASIC countries support strong, and credible domestic mitigation actions by developed country parties without undue reliance on cheap offsets to maintain their high carbon, unsustainable lifestyles and towards this end, the grouping supports markets that are credible and have high environmental integrity and strong non market approaches as well.

Ms. Sharma highlighted that cover decisions of COP26 should remain within the confines of the UNFCCC and the Paris Agreement (PA) and be fully consistent with its guiding principles of equity and Common but Differentiated Responsibilities and Respective Capabilities (CBDR-RC).

She stated that the planet will benefit from strong implementation of the Paris Agreement, particularly in this critical decade.

“Nations have responded to the ambition gap in mitigation with enhanced NDCs and net zero targets. Pledges and renewed commitments are on the table. We would not like to see the enhanced mitigation ambition meet the same fate as the pre 2020 climate finance ambition. It has been over a decade since the annual $100 billion pledge, and the world is still waiting for its mobilization and delivery,” the statement said.

“The planet will benefit from strong implementation of the PA, particularly in this critical decade. We can shift focus to implementation if we stop renegotiating elements of PA, such as who bears responsibility for providing resources, or how frequently parties need to review their NDCs [Nationally Determined Contributions]. These are settled issues under the PA,” noted Ms. Sharma.

Besides, India also highlighted some practical hiccups being faced by delegates in accessing the Scottish Event Campus (SEC) venue in Glasgow.

Meanwhile, United Kingdom’s COP26 President, Alok Sharma, spoke of a “constructive spirit” among the negotiators as they embark upon the final week of the important climate meet.

He said, “My priority now is pace. There needs to be a sense of urgency in all our negotiations.”

“The science is clear, we have no time to lose, and I will ensure that negotiations proceed in a timely manner. Whilst of course ensuring transparency and inclusivity.” The negotiators now have the tough task of aligning different national interests into a comprehensive way forward plan by the end of the summit on November 12, with a focus on keeping alive the central goal of keeping global temperatures below 1.5 degrees Celsius.

The 26th conference of parties (COP 26) to the United Nations Framework Convention on Climate Change (UNFCCC) has been underway at Glasgow, United Kingdom since October 31 with participation from nearly 200 countries. It will conclude on November 12.