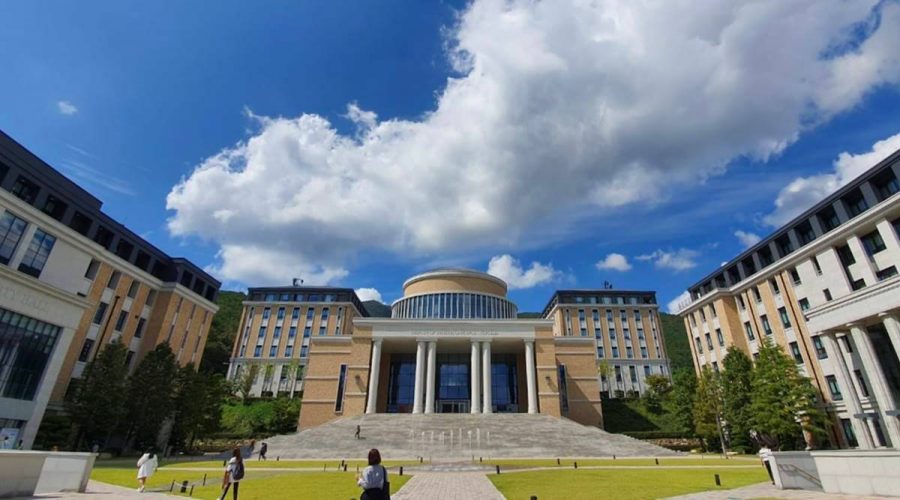 The Department of Indian Studies at the university had been considering phasing out the teaching of Hindi language at the university saying that knowledge of English would be sufficient for Korean nationals interested in working, studying and traveling in India. Just as the year was drawing to a close, in December 2020, a group of students and faculty members at Busan University of Foreign Studies (BUFS), unable to physically congregate due to the South Korean government’s restrictions on public gatherings due to the coronavirus pandemic, began using social media platforms to stage protests. For weeks prior to the start of the protests, the Department of Indian Studies at the university had been considering phasing out the teaching of Hindi language at the university saying that knowledge of English would be sufficient for Korean nationals interested in working, studying and traveling in India.

The Busan University of Foreign Studies that started its Hindi language department in 1983, along with Hankuk University of Foreign Studies in Seoul that launched its language programme in 1972, are the only two institutes of higher education where Hindi is taught as a full-time subject for undergraduate students and are among the oldest institutions in South Korea with coursework dedicated to the study of Indian languages, culture and business. In his second year of study, and now enrolled in the country’s compulsory military conscription, 24-year-old Lee Junhak’s interest in the study of Hindi started when he watched his first Bollywood films, Shah Rukh Khan’s ‘Om Shanti Om’ and Amir Khan’s ‘3 Idiots’, a decade ago. The next thing he remembers doing was picking up whatever books he could find on India and contacting Indians living in South Korea to know about their homeland.

On his first trip to India in 2016, Lee travelled extensively around the country, spending time with families in Bihar and Uttar Pradesh to learn about the country without a tourist’s lens. That year, he found himself enrolling in Pune’s Fergusson College to study Hindi.

“If you know Hindi, you can travel to off-beat places (in India),” explains Lee. When he returned to South Korea, he registered to study Hindi in college to improve his language abilities, Lee tells indianexpress.com in perfect Hindi, but using words and phrases that have become less common among native speakers in India. He dreams of publishing a book in Hindi and working as a travel guide for South Koreans picking India as their destination. The protesting students took their complaints to the Embassy of India in South Korea and the branch of the Indian Council for Cultural Relations (ICCR) in Seoul for intervention, but it was their video message to India’s Prime Minister Narendra Modi seeking the Indian government’s assistance that the students believe added weight to their complaint.

“We had a Zoom meeting with the embassy staff and ICCR and they told us that they had written to the university. But we don’t know what happened after that. They contacted us after we published the video for Prime Minister Modi,” says Lee. According to him, informal polls conducted by the student’s union showed that 86 of 102 students who had participated in these polls said they were against the scrapping of the language programme.

After several public queries regarding the status of discussion between the university and Indian government bodies, the Seoul branch of the ICCR issued a statement saying, “Ever since this matter was highlighted by Hindi professors at BUFS, the Embassy has been in touch with the top officials of the University. We will make all efforts to address the concerns of these students.”

Growing up in Bangladesh, 23-year-old Lee Soo-jin, would hear a mix of Hindi and Bengali everyday. “At that time, I didn’t realise the importance of Hindi. But after I moved back to Korea, I became distant from the language.” At home, her mother spoke Korean and her Bangladeshi father conversed with her in Bangla, but in South Korea, there was little to no opportunities to speak in or hear Hindi.

Certain that she had a head-start in the language, Soo-jin believed she would be better in the language than other Korean students. “India is getting bigger and bigger on the world platform. That is why I started searching for a college where I can learn Hindi properly. But sadly, there were only two colleges,” she says. Her protests to save the Hindi language programme at the Busan University of Foreign Studies stem from her desire to save the one of the two departments in a Korean institute of higher learning where students like her, with dreams of connecting with India can study. Till last year, between 50 and 55 students would enroll in the programme at BUFS, but that number has come down to 35 for the upcoming academic year, after whispers of the scrapping of the Hindi language programme started doing the rounds, said a faculty member who spoke on the condition of anonymity. The developments coincided with the appointment of a new department head who prioritised courses on business in India and believed that English would be adequate for Koreans focusing on India, students say, insisting that their protests haven’t been launched with the intent to target the university or individuals in authority. The university administration did not respond to indianexpress.com’s phone calls for comment.

Hindi language is taught at the university by three faculty members, of whom two are Indian nationals working on contract. “I have learned a lot about Korean culture because I studied the language,” says one faculty member, requesting anonymity. The department head’s argument that English will suffice for Koreans in India is flawed, he says. “I come from a small village in Bihar and no one speaks English there. It is not the common working language in India. Take Sarojini Nagar Market,” he says of the large market in New Delhi, “who speaks in English there?”

Having taught at the university for close to a decade, he has seen countless students develop a deeper interest in learning Hindi once they returned from their travels to India. This debate concerning the future of the university’s Hindi language programme comes approximately four months after the Indian government had announced that it would offer Korean as one of the foreign languages taught at secondary school level in the country. The decision had come following months of discussions between the Korean embassy and the Korean Cultural Center in New Delhi and the Indian government in an acknowledgment of the growing interest of Indian students wanting to learn the language, the Korean Cultural Center had said in July.

Over the past decade, as the popularity of Korean pop culture exports have exploded in India, so has the desire for fans to learn the language. But there is also the pull of higher paychecks and better standards of living that Korean companies are providing for Indian employees, especially those with Korean language abilities.

This has been possible because the Korean government has actively invested in promoting their language and culture and by encouraging Indians with plans of long-term stay in the country. Indians in South Korea who were interviewed for this report said that the Indian government has done little in comparison to promote either the country or its diverse cultural traditions for Koreans to develop an interest similar to their Indian counterparts. “Yes, there is a challenge in promoting a single language or culture as representative of ‘India’ but we still don’t do enough,” says an Indian citizen residing in Busan, requesting anonymity.

If the department at Busan University of Foreign Studies were to scrap the 38-year-old Hindi language programme, while it would mean a loss of job opportunities for Indian faculty members working on contract, but there are no dearth of jobs for people with their skills in the country, given the economic and diplomatic ties between New Delhi and Seoul, the faculty members say.

“As a rising economic powerhouse and nuclear-armed state, India has emerged as an important regional power. There are innumerable opportunities for Koreans in India and I am one of those people who dreams of these opportunities,” says Soo-jin, “But before jumping into that, we must learn Hindi and their culture. We must understand their way of thinking and their daily lifestyle. I don’t think it will be easy enough to do anything there without Hindi…We can’t just ignore the fact; we must face it.”

01/14/2021 World Comments Off on In South Korea, university students are fighting to save one of country’s oldest Hindi language programmes
TV & Movies