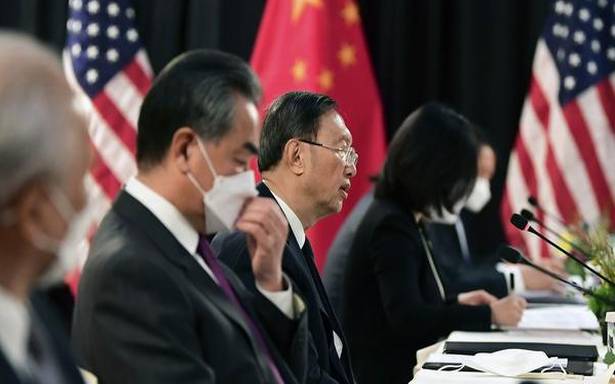 The reference was not favourably received by Beijing

The Joe Biden administration highlighted the strength of U.S.-India ties in its March 19 meeting with Chinese officials in Alaska, underlining how it has increasingly come to view India as central to its broader objectives in dealing with China in the Indo-Pacific region.

The reference to India, it is learnt, was not favourably received by China’s two officials in Alaska — top diplomat and Politburo member Yang Jiechi and Foreign Minister Wang Yi — and is being seen as reflecting how U.S.-India relations, only two months into the new administration, are developing robustly.

The speed with which the new Biden administration has pushed closer ties with India has come in sharp contrast to expectations in some quarters, both in New Delhi and Washington, that relations would not be as smooth as they were with the Donald Trump administration, both because of the rapport between Mr. Trump and Prime Minister Modi and the former U.S. President’s lack of interest in India’s internal affairs and more broadly, human rights issues abroad.

But two months on, any initial wariness that the relationship, which had seen rapid progress particularly on the security side over the past four years, would have to be rebuilt from scratch has dissipated.

One reason for that is the successful holding of the virtual Quad summit between India, the U.S., Japan and Australia on March 12, seven days before the U.S.-China Alaska talks. Although the Biden administration’s message was it did not want to push any country beyond its comfort level and was willing to keep in mind their respective China concerns — hence the absence of any reference to China in the joint statement and the focus on deliverables such as the vaccines initiative — India’s immediate expression of willingness to go ahead with the summit and the “clarity” with which it put forward its agenda eased many concerns in Washington that New Delhi, amid the on-going disengagement process with China along the Line of Actual Control (LAC), might waver in its commitment to the grouping. If India has made clear it will not be part of any formal alliances, it has also suggested it is more willing to push the bar with China than previously.

Comment | The message in Alaska, from Washington to Beijing

The broader reason for the smooth transition in India-U.S. relations is the new administration’s emphasis on a bipartisan approach to India and other key foreign policy issues, despite the divisiveness at home on the domestic agenda. One indicator of that was Mr. Biden’s insistence that a video prepared for the Quad summit would begin by, at the very start, acknowledging former President George W. Bush’s legacy in building the Quad, which first came to life following the 2004 Indian Ocean tsunami. India’s familiarity with three of the key interlocutors in the new administration’s Indo-Pacific agenda — Secretary of State Antony Blinken and National Security Adviser Jake Sullivan, who chaired the meeting in Alaska, as well as the newly announced “Indo-Pacific coordinator” Kurt Campbell — has also helped.

On Thursday, China’s military hit out at the Quad, describing it as a mechanism “promoted by the United States” and said it “adheres to the Cold War mentality, believes in group confrontation, is keen on geopolitical games, and uses the so-called ‘China challenge’ as an excuse to ‘form cliques’ and openly provoke relations between regional countries”.

“We are firmly opposed to this,” PLA Senior Colonel and Ministry of Defence spokesperson Ren Guoqiang said. “Seeking peace, development, and seeking cooperation and win-win is the trend of the times. Anything that goes against the trend of the times and satisfies one’s own selfishness is untimely, unpopular and is doomed to failure. China has always insisted on being a builder of world peace, a contributor to global development, and a defender of international order. We urge the United States to take up its responsibilities and refrain from making mistakes and do more things that are conducive to regional peace and stability,” he said.

Editorial | For a reset: On U.S.-China meeting in Alaska

On the LAC disengagement, he repeated China’s earlier statement that both sides had positively viewed the disengagement at Pangong Lake and had “agreed to maintain communication through military and diplomatic channels so as to promote the settlement of other issues” such as in the Gogra-Hot Springs area, which the next round of military talks is expected to take forward. He said thanks to “joint efforts”, the situation in the border area “has been eased distinctly” and “China hopes the two sides can value the hard-won results, follow the important consensus reached by the leaders of both countries, maintain dialogue and communication, and stabilise the situation against relapse, gradually coming to solutions that can be accepted by the two countries to jointly maintain peace in the border area."

A bipartisan approach to foreign policy was among the messages delivered by the U.S. in Alaska to China’s officials, who in the course of the talks, in response to U.S. criticism on Hong Kong and Xinjiang, repeatedly highlighted the rancour in Washington following the elections, including the attack on Capitol and attempts to delegitimise the election. The other message was that a Biden administration would not be a return to Obama 2.0 and any notions of a “G2" arrangement and accommodation with China had long been buried.

The context in which India was brought up in Alaska — as a key partner of the U.S. and a country that shared similar values, a message that the Chinese side did not welcome — reflected the marked change from 2009, when a joint statement following talks in Beijing between Barack Obama and Hu Jintao said both sides “support the improvement and growth of relations between India and Pakistan” and were “ready to strengthen communication, dialogue and cooperation on issues related to South Asia and work together to promote peace, stability ad development in that region”. That brought a sharp response from Delhi, telling both countries that “a third country role cannot be envisaged nor is it necessary”.

03/27/2021 World Comments Off on In signal to China, U.S. raised India ties during Alaska talks
India