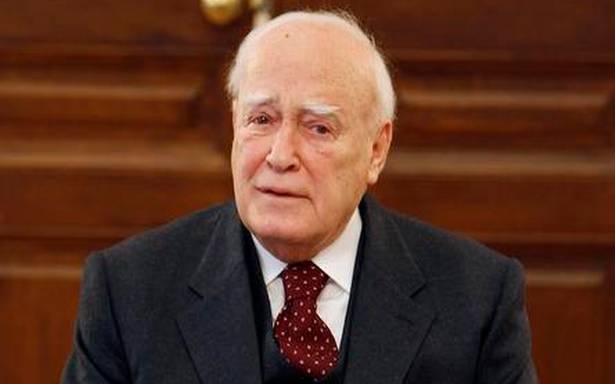 Veteran Greek politician Karolos Papoulias, who served as president at the height of the economic crisis of the 2010s, died on Sunday at the age of 92, the presidency said.

"With sadness we address our last greetings to Karolos Papoulias," President Katerina Sakellaropoulou said in a statement, thanking him for "vigorously defending social cohesion and national unity."

Papoulias spent a decade as president after being elected in 2005 and again in 2010, during the crisis that plunged the country into the most grave political and economic turmoil of recent decades.

His popularity suffered a major blow for supporting austerity measures dictated by international lenders in return for a bailout, which sparked violent protests.

In October 2012, demonstrators blocked a national parade in Thessaloniki and chanted "traitor" at Papoulias.

Before walking out of the parade, Papoulias told reporters: "We fought for Greece. I was a resistance fighter at 15, fighting against Nazism and the Germans."

However, he gave up his salary in solidarity with "the sacrifices of the people"

Born in Ioannina in northwest Greece in 1929, he was a national pole vault champion and member of the national volleyball team in his younger years.

He later studied law in Athens, Italy and Germany and became a lawyer in 1963.

A member of Parliament from 1977 to 2000, he twice served as foreign minister in socialist governments.