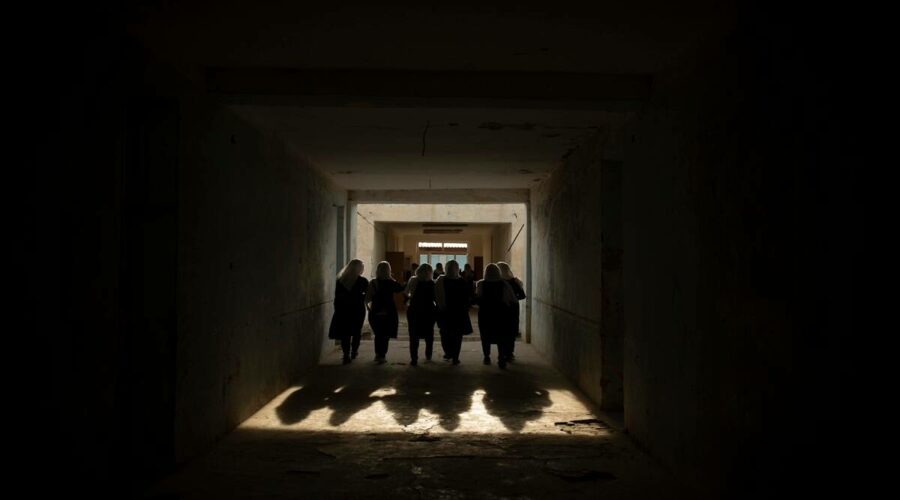 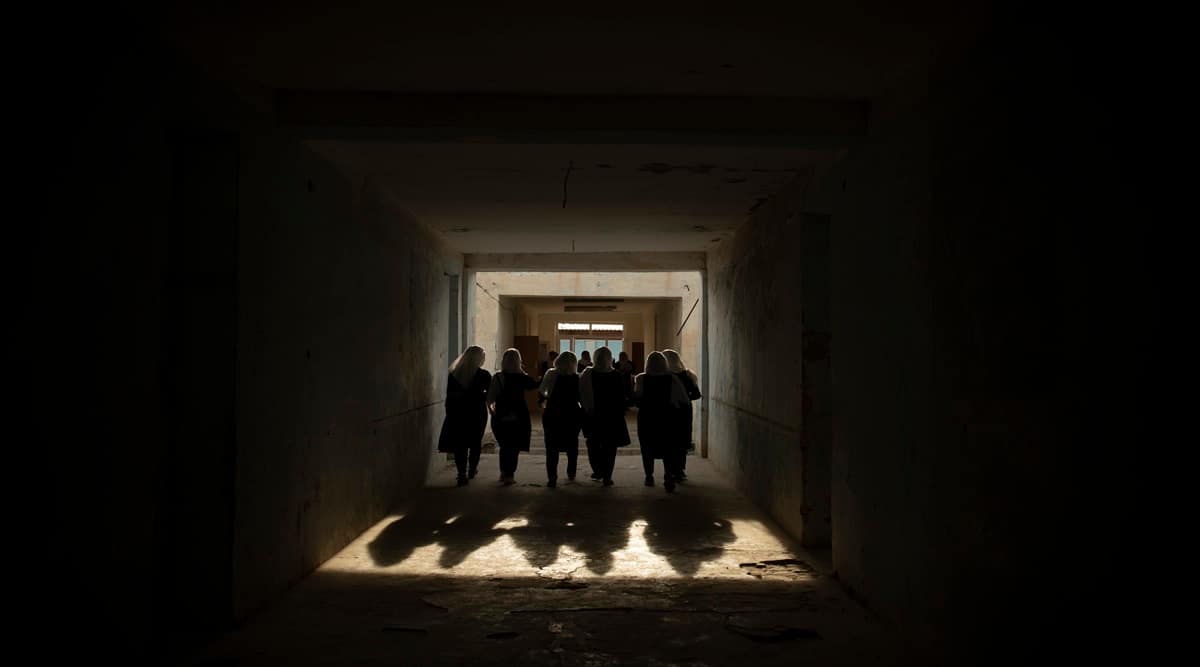 As Afghan women cloistered in their homes Tuesday, fearing for their lives and their futures under Taliban rule, a pair of female television broadcasters offered starkly contradictory visions of the country’s direction.

On Tuesday morning, Beheshta Arghand, a newscaster with the privately owned Tolo News channel, interviewed a Taliban official, asking him about the Taliban’s house-to-house searches in the Afghan capital.

“The entire world now recognizes that the Taliban are the real rulers of the country,” said the official, Mawlawi Abdulhaq Hemad, a member of the Taliban’s media team. “I am still astonished that people are afraid of Taliban.”

The remarkable scene of a Taliban official taking questions from a female journalist was part of a broader campaign by the Taliban to present a more moderate face to the world and to help tame the fear gripping the country since the insurgents seized the capital Sunday.

But hours later, a prominent anchorwoman on state television, Khadija Amin, tearfully told a Clubhouse chat room that the Taliban had suspended her, and other female employees, indefinitely.

“I am a journalist and I am not allowed to work,” said Amin, 28. “What will I do next? The next generation will have nothing, everything we have achieved for 20 years will be gone. The Taliban is the Taliban. They have not changed.”

The stories of the two journalists reflect the uncertainty and deep anxiety Afghan women face as they try to assess what will befall them as the Taliban take control of the country. Millions are afraid of a return to the repressive past, when the Taliban barred women from working outside the home or leaving the house without a male guardian, eliminated schooling for girls and publicly flogged those who violated the group’s morality code.

“We assure that there will be no violence against women,” the spokesperson, Zabihullah Mujahid, said. “No prejudice against women will be allowed, but the Islamic values are our framework.”

Pressed for details, he said only that women could participate in society “within the bounds of Islamic law.”

The previous Taliban rule, from 1996 to 2001, was a bleak period for Afghan women, and the years since have been ones of much suffering and hardship for men and women alike. The one widely recognized bright spot: the treatment of women.

In the nearly two decades since the U.S. invasion toppled the Taliban, the United States has invested more than $780 million to encourage women’s rights. Girls and women have joined the military and police forces, held political office, competed in the Olympics and scaled the heights of engineering on robotics teams — opportunities that once seemed unimaginable under the Taliban.

The question now is whether the Taliban’s interpretation of Islamic law will be as draconian as when the group last held power.

There are already scattered signs that, at least in some areas, the Taliban have begun to reimpose the old order.

Women in some provinces have been told not to leave the home without a male relative escorting them. In the southern city of Kandahar, women’s health-care clinics were shut down, a resident said. In some districts, girls’ schools have been closed since the Taliban seized control of them in November.

Women there said they were starting to wear the head-to-toe burqa in the street, partly in fear and partly in anticipation of restrictions ordered by the Taliban.

At Kabul University, in the capital, female students were told they were not allowed to leave their dorm rooms unless accompanied by a male guardian. Two students said they were effectively trapped because they had no male relatives in the city.

In Mazar-i-Sharif, in northern Afghanistan, Aliya Kazimy, a 27-year-old university professor, said that women shopping alone in the city’s bazaar were turned away and told to return with male guardians.

“I am from the generation that had a lot of opportunities after the fall of the Taliban 20 years ago,” she said in a text message. “I was able to achieve my goals of studying, and for a year I’ve been a university professor, and now my future is dark and uncertain. All these years of working hard and dreaming were for nothing. And the little girls who are just starting out, what future awaits them?”

United Nations Secretary-General António Guterres said Monday that his organization was “receiving chilling reports of severe restrictions on human rights” throughout the country. “I am particularly concerned by accounts of mounting human rights violations against the women and girls of Afghanistan,” he said at an emergency meeting of the Security Council.

U.N. officials have not provided any details about those reports and it is too early to say whether they represent the national policy of the incipient government or outlying acts of freelance vigilantes.

There were also some indications that the Taliban was, in some cases, adopting a more tolerant stance regarding the role of women and girls.

UNICEF, the U.N.’s children’s organization, said one of its representatives met a Taliban-appointed health commissioner Monday in Herat and reported that he asked that women who work for the Health Department return to work.

But UNICEF also reported mixed messages on questions of education. In some areas, local Taliban authorities said they were waiting for guidance from leaders, in others they said they wanted schools for boys and for girls up and running.

Afghanistan observers said that while it was not unheard-of for the Taliban to grant interviews to female journalists, including international correspondents from CNN and other outlets, they were rare inside the country.

But Rukhsar Azamee, a former Tolo producer who fled Afghanistan in 2015 after receiving death threats, pointed out that a Taliban suicide bomber had attacked a Tolo bus in 2016, killing seven of her colleagues and wounding 25.

In the TV interview Tuesday, she said, “they are sitting across the table from the same women they are threatening.”

And the suspension of Amin and other women from state television undermined any goodwill the Tolo interview might have achieved.

Amin said the last time she read the news on air was Sunday at 9 a.m., before the Taliban took Kabul. That evening, a Taliban official was in the anchor chair.

The notion that the Taliban will suddenly change their ways has been greeted with deep skepticism.

Worried about running afoul of local Taliban officials, many women have remained shuttered at home. Kabul residents have been tearing down advertisements showing women without headscarves in recent days.

In Kabul, a handful of women bravely protested in a square near the presidential palace, holding signs in front of armed Taliban fighters demanding civic, social and political freedoms. 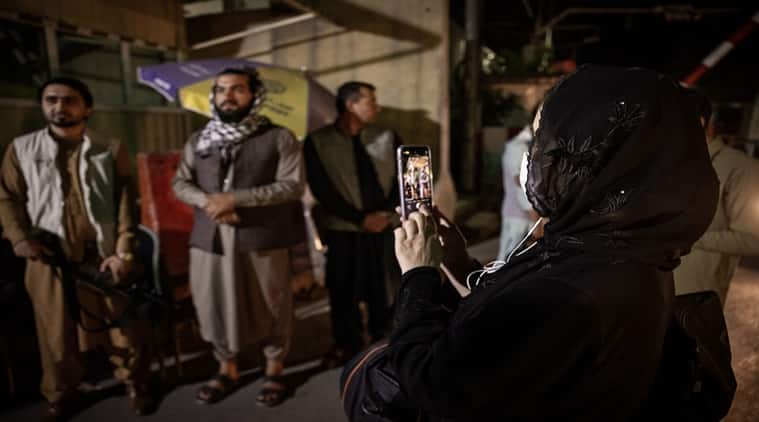 When the Taliban last ruled, restrictions on behavior, dress and movement were enforced by roving morality police from the Ministry for the Propagation of Virtue and Prevention of Vice, who drove around in pickup trucks, publicly humiliating and whipping women who did not adhere to their rules. In 1996, a woman in Kabul had the end of her thumb cut off for wearing nail polish, according to Amnesty International.

Women accused of adultery were stoned to death. Homosexuality was a crime punishable by death.

The ban on girls’ schooling forced female teachers to set up secret schools for girls in their homes. Female medical personnel continued to work but in establishments strictly segregated by sex.

For a new generation of Afghan girls who grew up going to school and nurturing unfettered dreams, the Taliban era is ancient history, and turning back the clock a nearly incomprehensible fate.

Wida Saghary, an Afghan women’s rights activist who left Afghanistan for India three months ago, said she is sheltering three other female activists at her home in Delhi and is in touch with other activists inside the country. She urged women to resist the Taliban’s restrictions peacefully but forcefully.

08/18/2021 World Comments Off on For Afghan women, Taliban stir fears of return to a repressive past
India