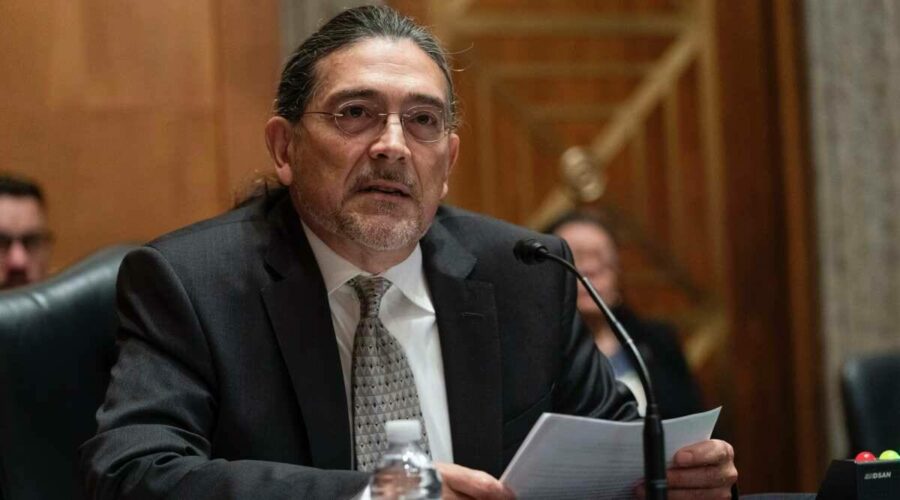 During his confirmation hearing, Santos, a statistician by training, told senators he was not a politician, though the position is a political appointment. Robert Santos was confirmed Thursday as the next US Census Bureau director, becoming the first person of colour to lead the nation’s largest statistical agency on a permanent basis.

The Senate approved Santos, a third-generation Mexican American statistician from San Antonio, Texas, for the job overseeing a bureau that conducts the once-a-decade census, often described as the nation’s largest civilian mobilization, as well as surveys that create the data infrastructure of the nation.

The confirmation hit a small speed bump when Republican Sen. Rick Scott of Florida last month blocked an attempt for a quick approval and asked for a formal vote, saying he feared Santos would politicize the bureau, without offering further explanation.

During his confirmation hearing, Santos, a statistician by training, told senators he was not a politician, though the position is a political appointment.

The new director inherits a Census Bureau workforce recovering from the execution of the most difficult head count of US residents in recent memory. The 2020 census was challenged last year by the pandemic, natural disasters, delays and attempts at political interference by the Trump administration.

The pandemic also disrupted one of the Census Bureau’s most important programs, the one-year American Community Survey, which provides a wide-ranging picture of the US on everything from commute times to education levels. Bureau officials announced earlier this year that the 2020 survey won’t be released in its usual format this fall because of troubles collecting data during the pandemic.

“It is important for the bureau to be led by a Senate-confirmed director who can speak with the level of authority needed to build widespread confidence in the results of a difficult and controversial census,” said the letter sent by The Leadership Conference on Civil and Human Rights.

In his new job, Santos, 66, will be responsible for leading the agency as it lays the groundwork for executing the next census in 2030, as well as shepherding the last releases of data gathered during the 2020 census and supervising other bureau programs.

During his confirmation hearing, Santos told senators that his duel passions were statistics and helping people. He is a former president of the American Statistical Association and was vice president and chief methodologist at the Urban Institute.

“Those opportunities that I’ve had allowed me to believe that I should pay it forward, and I’ve tried to do that every day of my life,” Santos said. “Census Bureau data helps weave us together to form a more perfect union. Although this is a political position, I’m not a politician.”

Santos’ predecessor, Steven Dillingham, resigned last January, in the middle of data crunching for the 2020 census, while facing criticism that he was acceding to President Donald Trump’s demand to produce citizenship information at the expense of data quality.

Bureau workers were under significant pressure from two Trump political appointees to figure out who was in the US illegally using federal and state administrative records, and Dillingham, also a Trump appointee, set a deadline for bureau statisticians to provide him with a technical report on the effort, according to the Office of Inspector General. The effort to gather citizenship information was abandoned a short time later.

At the time, Dillingham described the events as a misunderstanding and said there were no potential violations of laws or regulations.

During Dillingham’s tenure, the Trump administration unsuccessfully tried to put a citizenship question on the 2020 census questionnaire and named a handful of political appointees that statisticians and Democratic lawmakers worried would politicize the once-a-decade head count of every U.S. resident.

The president also issued two directives that advocacy groups said were part of efforts to suppress the participation of minorities and immigrants in the 2020 census.

After Dillingham resigned, the agency’s chief operating officer, Ron Jarmin, assumed the director’s duties on an interim basis. Santos will fill the remainder of Dillingham’s term, which expires at the end of the year, and then start a new five-year term.

Santos told senators that the Census Bureau needs more independence and transparency to build public trust in the statistical agency and that the agency’s career staff needed nurturing after enduring “a tumultuous 2020.”

The 2020 census experienced unprecedented obstacles because of the coronavirus pandemic, as well as wildfires in the West and hurricanes along the Gulf Coast. The pandemic forced the Census Bureau to delay until April the release of state population numbers used to apportion congressional seats. The release of redistricting data used for drawing congressional and legislative districts was postponed until August.

Looking ahead to the next census in 2030, Santos said he would be in favor of a proposal that never got off the ground before the last census combining the questions about race and Hispanic origin. A previous study by the Census Bureau showed that doing so would increase response rates by Hispanics, who may be unsure how to answer the race question because they often are from mixed race and ethnic backgrounds.

The Office of Budget and Management had considered pairing the questions for the 2020 census, but the Trump administration decided to keep the race question separate from the ethnicity one.

“I can use my own personal perspective as a Latino, and I can use my research experience and my leadership position, to work with OMB to make sure that the proper attention is given to that specific issue,” Santos said.