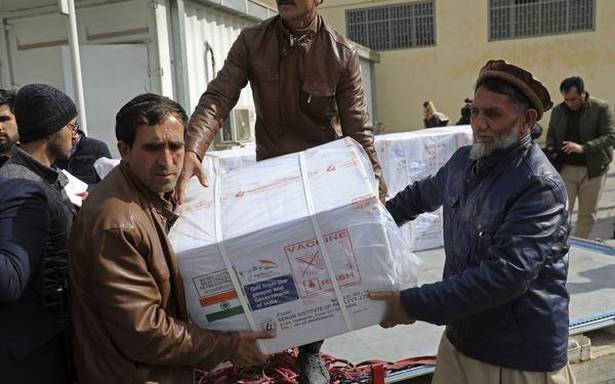 “The (WHO) certification process is underway and hopefully it will be done in a week and we will start the vaccination process in all 34 provinces,” said Ghulam Dastagir Nazari, head of the immunisation program.

Afghanistan received 500,000 doses of AztraZeneca’s COVID-19 vaccine from India on Friday 7, the first to arrive in the country, which is still waiting for emergency approval from the World Health Organisation before it can use them.

Ghulam Dastagir Nazari, head of the immunisation program at the Health Ministry said the doses would be stored in Kabul until the emergency authorisation was received, which it hoped would happen in a week.

The vaccines were produced by the Serum Institute of India(SII), which is producing the AstraZenecca/ Oxford University vaccine for mid- and low-income countries.

“The (WHO) certification process is underway and hopefully it will be done in a week and we will start the vaccination process in all 34 provinces,” said Mr. Nazari.

The Afghan government has already trained 1,000 people to deliver the vaccine out of the 3,000 that will be needed to carry out its vaccination drive, he said.

Afghan health officials have also said that the international COVAX programme aimed at improving access to the COVID-19 vaccine for developing countries would provide vaccines to cover 20% of the country’s 38 million population.

Afghanistan has had 55,335 COVID-19 cases and 2,410 deaths from the disease, according to the Health Ministry.

The WHO listed Pfizer and BioNTech’s COVID-19 vaccine for emergency use on December 31 as it sought to accelerate vaccination in the developing world, which is lagging in western countries.

A regional WHO official told Reuters this week that they were looking at the production sites for the AstraZeneca vaccine and hoped to make the decision on emergency use within weeks.