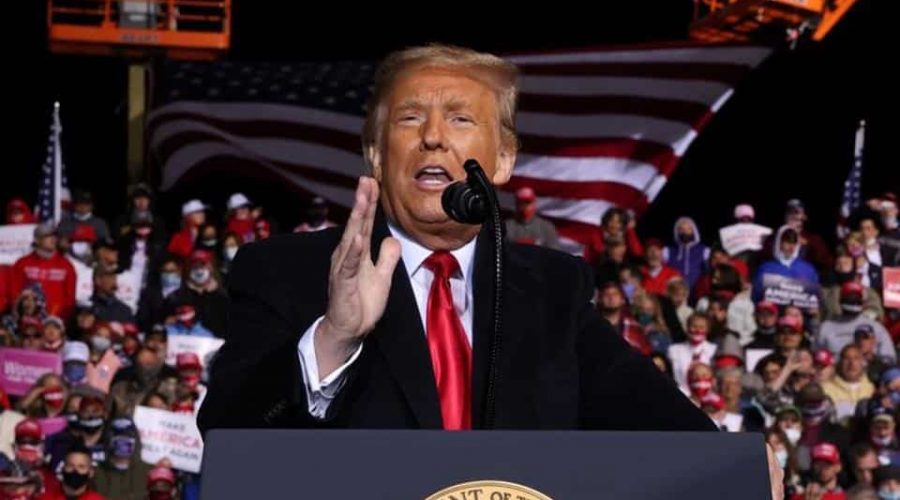 US President Donald Trump headed to Iowa on Wednesday seeking to make up ground against Democrat Joe Biden as part of a three-week sprint to Election Day on Nov. 3.

Trump, a Republican who is trailing Biden in national and some key state opinion polls, will stage a rally at the Des Moines, Iowa, airport. Biden has a virtual fundraiser and plans to give pre-recorded remarks to a Muslim advocacy group. Trump’s Iowa stop is part of a barnstorming tour in states critical to deciding who will won the election.

On Thursday he will be in North Carolina and Florida, on Friday he will campaign in Florida and Georgia and on Saturday he will speak in Michigan and Wisconsin. He is expected to spend Saturday night in Las Vegas, Nevada, and then launch into a western swing.

Trump on Wednesday pulled into a statistical tie with Biden in Florida, a key battleground, at 47% vs 49% with a credibility interval of four points, a Reuters/Ipsos opinion poll showed though Biden’s lead widened in Arizona and he had a 10 percentage point advantage nationally among likely voters.

On Thursday, Trump and Biden, who had been due to hold a second presidential debate, will instead take part in dueling televised town halls. NBC News said Trump’s event in Miami would take place outdoors to prevent the spread of the coronavirus.

That Trump, who battled the virus earlier this month, is traveling to Iowa so close to Election Day suggests his campaign is concerned about voter support there for his re-election. Trump beat Democrat Hillary Clinton in the state by almost 10 percentage points in 2016, but opinion polls have shown Iowa to be competitive.

More than 13 million Americans have cast ballots, setting a record early pace, according to the U.S. Elections Project at the University of Florida. Many seek to avoid the large crowds expected on Election Day.

In the last presidential election, some 1.4 million Americans had cast early votes as of Oct. 16, 2016.

About two dozen people showed up more than two hours before polls opened in Memphis, Tennessee, to claim spots in line, local media reported, as voting opened in Kansas, Rhode Island and Tennessee.

In Georgia, where long lines snaked out of polling places and down sidewalks on the first two days of early voting this week, Gwinnett County election officials reported waits of up to three hours to cast early ballots on Wednesday.

A US District Court judge extended voter registration in Virginia through Thursday after a severed cable line caused the state’s website to crash on Tuesday, the final scheduled day of registration.

Trump looks to be spending much of the week aiming to galvanize his white, conservative base rather than seeking to appeal directly to undecided voters, many of whom live in the country’s suburbs.

On Thursday, he heads to Greenville in rural North Carolina, a closely fought state where early voting will begin that day, then on to rural Georgia and central Florida the next day.

Reuters/Ipsos polling released this week showed Biden widening his lead in the key states of Wisconsin and Pennsylvania – states Trump won in 2016.

Iowa has experienced a spike in COVID-19 cases, with hospitalizations at an all-time high. Republican Governor Kim Reynolds has resisted any statewide containment measures such as a mandate to wear masks and urged Trump supporters on social media to turn out en masse for the president.

Trump’s bout with coronavirus has put the focus of the campaign’s closing stretch squarely on his response to the pandemic, with Biden repeatedly criticizing Trump’s handling of a virus that has infected more than 7.8 million people in the United States, killed more than 214,000 and put millions out of work.

In Florida on Tuesday, Biden told seniors at a community center that Trump had recklessly dismissed the threat that the virus had posed to their at-risk population.

Trump has touted his handling of the crisis.

The Trump campaign said it would conduct temperature checks and hand out masks at his rallies but not require attendees to wear them.

10/15/2020 World Comments Off on Donald Trump heads to Iowa looking to galvanize his base, gain boost against Joe Biden
TV & Movies