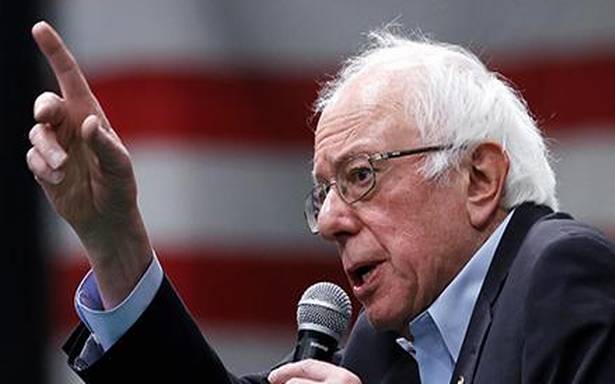 Rifts between Democrat candidates were on full display over the weekend as the presidential hopefuls criticised each other during a weekend of campaigning in freezing temperatures across New Hampshire, before the State’s primary elections on Tuesday.

Candidates campaigned against the backdrop of confusion over and a delay in results from the crucial Iowa Caucuses held last week — in which centrist Pete Buttigieg has claimed most delegates and progressive candidate, independent Senator from Vermont Bernie Sanders’s campaign has said it will ask for some of the votes to be recanvassed (votes re-checked against paper ballots).

Several news outlets, including the Associated Press, which has traditionally had a prominent role in calling U.S. races, refrained from doing so.

Weekend polls showed that Mr. Sanders continued to hold on to his significant lead going into the state’s primaries. A Boston Globe/Suffolk poll put Mr. Sanders at 27%, followed by centrists Mr. Buttigieg at 19%. Senator from Minnesota, centrist Amy Klobuchar, was third at 14%. Massachusetts Senator Elizabeth Warren, who is also running on a progressive platform like Mr. Sanders, came in at 12%, tied with former Vice-President Joseph R. Biden.

“Our views are different,” Mr. Sanders said over the weekend. “Pete has raised campaign contributions from over 40 billionaires.”

Mr. Buttigieg — like his competitor for the centrist vote, Mr. Biden — criticised Mr. Sanders for his Medicaire-for-all policy without details about how it would be funded. He also suggested Mr. Sanders was not the one to unite a highly polarised country.

“I respect Senator Sanders, but when I hear this message go out that you’re either for revolution or you’ve got to be for the status quo, that’s a vision of the country that doesn’t have room for most of us,” Mr. Buttigieg said on Sunday, as per the Washington Post.

Mr. Biden is still leading in national polls. The Economist/YouGov poll of February 2-4, where he was at 24% followed by Mr. Sanders at 19% and then Ms. Warren at 18%. Mr. Biden is also expected to win in South Carolina on February 29, where the African American vote is strongly represented.

Further complicating the Democrat field are two billionaire candidates. The first is hedge fund manager Tom Steyer who has been doing well in South Carolina polls. The other is businessman and former New York City mayor Michael Bloomberg, who has far outspent his rivals, is joining the race on Super Tuesday (March 3), when a large number of states hold their primaries.

President Donald Trump has tried to capitalise on the confusion over the Iowa results.

“Will be in Manchester, New Hampshire, tonight for a big Rally. Want to shake up the Dems a little bit – they have a really boring deal going on. Still waiting for the Iowa results, votes were fried,” Mr. Trump tweeted on Monday morning.

Related posts:
02/10/2020 World Comments Off on Democratic rivals rip into each other
TV & Movies