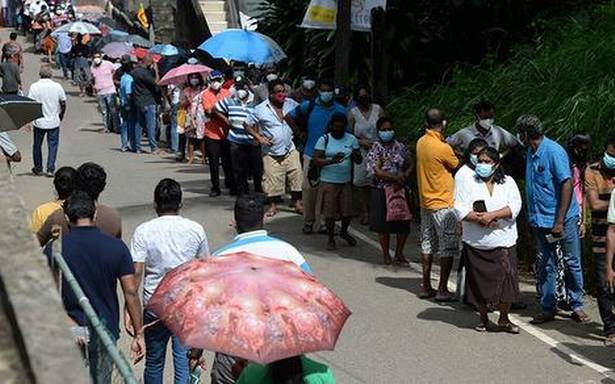 Currently, there are about 62,000 active cases; people across the country voice concern over economic distress

Sri Lanka on Thursday detected the highly transmittable Delta or B.1.617.2 variant of COVID-19 in five patients, amid a stubborn third wave persisting through a near-month-long lockdown in the country.

Speaking to The Hindu, Dr. Chandima Jeewandara, director of the unit, said: “The Delta variant comes with three main factors — it is highly transmittable, it causes severe disease, and it evades single dose vaccine,” he said.

Thursday’s finding points to the presence of the Delta variant in the community, a week after it was found in one patient in a quarantine facility.

“It is the worst we could have imaged at such a time,” Dr. Jeewandara said, pointing to the current case load — about 62,000 active cases — and low vaccine coverage. “We are already dealing with a spike in cases with the Alpha variant. Delta poses a greater risk because our vaccine coverage is low, and among those who are vaccinated a majority have got only one dose,” he said.

Meanwhile, nearly 6 lakh persons are awaiting their second dose of Covishield, delayed after India stopped exporting vaccines in the wake of its own devastating second wave. The Sri Lankan government is trying to tap other sources, while the country witnesses a steady surge in infections in the past fortnight, with daily cases spiking to over 3,000 on some days, despite a continuing lockdown allowing only essential services and select travel.

For a week now, less than 20,000 PCR tests were carried out a day, data from the Health Promotion Bureau showed, although medical professionals are calling for more testing. Further, Colombo-based Institute for Health Policy, an independent research institution, found an average test positivity rate of 13.8% during the last week, based on official data.

A high positivity rate and daily deaths — an average of 67 in the past week, coupled with a slow vaccination drive, concentrated in the capital, only heightens the threat posed by the Delta variant, experts have cautioned.

The source of the Delta variant now detected in the community is yet to be established. The Sri Lankan Civil Aviation Authority’s ban on travellers from India from disembarking, imposed early May, is in place, but visitors from select countries are allowed to enter. Observing it was “likely imported”, Dr. Jeewandara said: “Remember, the Delta variant has been detected not just in India, but in many other countries, including the U.K. and the U.S. It could have come from anywhere, we do not know yet.”

While health authorities grapple with the prevailing spike, and prepare to tackle the dangerous Delta variant, people across the country, especially daily wage earners, are reeling under the economic blow of the lockdown.

Scores of garment sector workers, domestic workers, and youth employed in small shops and restaurants have lost their jobs since the pandemic struck. The country witnessed an increase in unemployment to 5.8% last year, the highest since 2009, after the civil war ended.

Those engaged in rural livelihoods have also suffered huge losses, with limited or no access to the market, and falling prices for their produce. “Women engaged in small-scale farming and fisheries in our district are desperate for some respite. Most traders don’t buy their produce any more. And in the event of a trader coming to their village to buy their produce, the women don’t get to fix the price, but are forced to sell it for whatever the trader dictates,” says Arunachalam Elangeswari, of the Suriya Women’s Development Centre in the Batticloa district, in the Eastern Province.

“With the entire family at home now, that too with much less income, some women are eating only if there is something left after the rest of the family has had a meal,” said the community activist. “The women are unable to buy sanitary pads, and we are hearing of many more cases of domestic violence in these past weeks.”

The situation among people without homes or personal toilets is miserable, especially when they contract Covid-19, like some families in Ratnapura district, in the Sabaragamuwa Province. “We work with the people in villages where rubber estate workers reside. They are mostly Malaiyaha [hill country] Tamils from very poor homes. They have no access to health care. And most of them are not covered in the 5,000-rupee allowance,” said catholic priest Fr. Jeewantha Peiris, referring to the government’s Covid assistance scheme for low-income households. While families already registered for the government’s poverty alleviation Samurdhi programme have received it, many poor families who are not part of the programme have been left out of the pandemic allowance, according to him. “They get excluded at every level.”

Poor wages and living conditions, along with a growing pool of jobless youth — who returned home in the last year — have exacerbated the impact of the pandemic in Badulla district in Sri Lanka’s Uva Province, which has a sizeable population of Malaiyaha Tamils working in the tea estates.

Nadesan Suresh, Chairman of the Uva Shakthi Foundation, an NGO working on human rights and development, said the lack of housing and land rights put the people at a disadvantage, preventing them from even maintaining a small vegetable garden for sustenance. The disadvantages of a centralised system of governance is felt even more in a pandemic situation like this, he pointed out, making a case for greater devolution of powers to the provinces and local government authorities.

“If someone from an estate here gets a PCR test done, it takes upto six days for the results to come, because the sample goes to Colombo. A crisis like this show us how disempowering our governance and administrative structures are.”

Sri Lanka has faced the civil war and the Indian Ocean tsunami that offered many lessons on managing crisis and disaster, he recalled. “But we did not learn. And now Covid-19 is giving us yet another lesson. If we lose this opportunity too, the country may never learn in future,” he said.