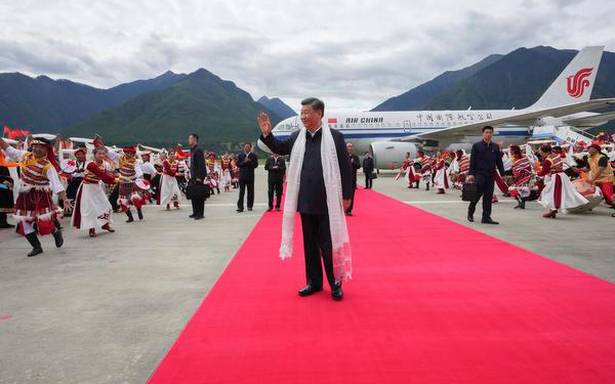 Chinese President Xi Jinping has praised a border-guard battalion in Tibet, which shares boundary with the Indian state of Arunachal Pradesh, saying its troops have done a “great job” in the past five years, official media here reported.

"President Xi writes back to a plateau-stationed border-guard model battalion, saying they have done a great job in the past five years and encouraging them to make new contributions to the Party and the people," the state-run Global Times reported on Monday.

The model battalion is under the Xizang (Chinese name for Tibet) Military Command of the People’s Liberation Army (PLA), it said.

In 2016, Mr. Xi bestowed special honours on a PLA military battalion posted in Tibet for its "outstanding performance in safeguarding borders".

Mr. Xi, who heads the Central Military Commission (CMC) — the overall command authority of the PLA, signed orders to give honorary titles for the battalion in 2016.

"Troop 77656 is now titled as a ‘model plateau battalion’ for its outstanding performance in safeguarding borders, ensuring stability and helping disaster relief," the state-run Xinhua news agency had said in a report in August 2016.

The model plateau battalion is reportedly one of the six battalions functioning under the Tibet Military Area Command.