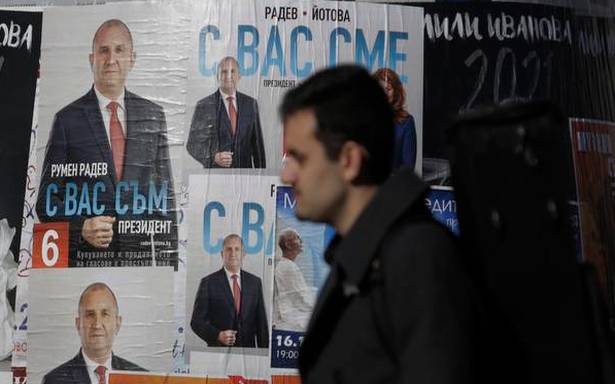 In the November 14 presidential election, incumbent Rumen Radev is seeking a second five-year term in the largely ceremonial post

Voters in Bulgaria go to the polls on November 14 for the third time in seven months amid a virus surge, after no party secured enough support in the previous two elections in April and July to form a stable government.

Their task this time will be not only to break the political deadlock that has badly hurt the economy of the European Union’s poorest country, but also to elect a new President.

More than 6.7 million Bulgarians are eligible to vote, but pollsters expect many of them to stay home because of growing concern over a new deadly COVID-19 wave and rocketing numbers of infections and deaths.

On November 11, Bulgaria reported its highest ever total of daily fatalities. Its seven-day rolling average of deaths per million inhabitants reached 24.13, compared with an EU average of 3.1, according to the Johns Hopkins University.

Although hospitals are struggling with a rising patient influx, the current caretaker government has been hesitant to impose unpopular lockdown restrictions before the election.

Latest opinion polls indicate that despite a further erosion in support for the former ruling GERB party it is likeliest to finish first in elections on November 14, which analysts attribute to voters’ tendency to stick to the status quo during a crisis.

Recent investigations into alleged corruption during ex-Prime Minister Boyko Borissov’s tenure in office, however, are limiting his chances to find coalition partners for a new term — which would be the fourth in the last 12 years.

We Continue the Change, a new party led by two Harvard-educated ex-ministers in the interim government — Kiril Petkov and Asen Vasilev — is seeing its support grow because of their resolute anti-graft actions.

Opinion polls suggest that up to seven parties could pass the 4% threshold to enter parliament in the November 14 vote.

A recent Gallup International survey ranked GERB first with 23.5%, followed by its two main rivals — We Continue the Change with 15.5% and the Socialist party with 15.2%.

The anti-elite There is Such a People party led by TV entertainer Slavi Trifonov, which narrowly won the July elections, is projected to finish fourth due to its failure to set up a government with other anti-graft groups.

“The winner in Sunday’s election will be the GERB party, but after last year’s protests it has become clear that it is in political isolation,” Parvan Simeonov, a Sofia-based political analyst for Gallup International, told The Associated Press.

Mr. Simeonov predicted tough coalition talks in a fragmented legislature, but voiced hope that there will be stronger public pressure on politicians.

“The people will force politicians to form a government, so this time around the chances for it are better,” he said.

In the November 14 presidential election, incumbent Rumen Radev is seeking a second five-year term in the largely ceremonial post.

Mr. Radev, a vocal critic of Mr. Borissov and firm supporter of last year’s anti-corruption protests, is tipped to win slightly under the 50% needed for an outright victory in the first round. If so, there will be a runoff vote on November 21.

His main contestant among 23 running for the post is Anastas Gerdzhikov, a university professor.