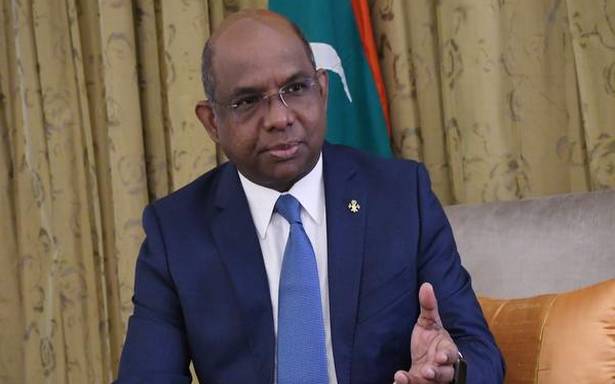 In a first for the Maldives, Foreign Minister Abdulla Shahid was elected the President of the General Assembly for 2021-22, winning 143 votes or nearly three fourths of the 191 countries that voted in the annual election, while his rival, former Afghanistan Foreign Minister Zalmai Rassoul won 48.

Mr. Shahid’s win was welcomed in particular in New Delhi, where Indian diplomats had been active behind the scenes in helping the Maldives canvass for him, after Maldives announced its candidate for the 76th General Assembly Presidency a year ago. Sources confirmed that given the close cooperation between both countries, Maldives is in discussions with the Indian mission for India’s deputy Permanent Representative at the UN Nagaraj Naidu to officiate as Mr. Shahid’s Chef de Cabinet.

Maldives President Ibrahim Solih called the election win “resounding” and a “great honour for the Maldives”, while former President and Maldives speaker Mohammad Nasheed said it was a “great day” for small island states and for “climate vulnerable countries everywhere”.

“This is a testimony as much to [Mr. Shahid’s] own stature as to the standing of Maldives. We look forward to working with him to strengthen multilateralism and its much-needed reforms,” said External Affairs Minister S. Jaishankar.

As The Hindu had reported last week, India had made it clear to Afghanistan’s government that it would be unable to support Mr. Rassoul as it had declared its support for Maldives publicly in November, long before Afghanistan announced its candidature in January this year. The announcement had caused an awkward tussle within the Asia Pacific group, whose turn it is to take the Presidency of the General Assembly, and especially for India, which has close ties with both countries.

Sources said the announcement was a “surprising development”, and that it was important for Maldives to take the position that it has, unlike Afghanistan, never held before.

“Both Maldives and Afghanistan have excellent ties with India and both candidates are friends of India. However, since India had already committed its support to Maldives at a time when no other candidate was in the fray, India voted in favour of Maldives,” the sources said.

Mr. Shahid’s win will also come as a relief for New Delhi, given adverse comments against India by the previous PGA from Turkey Volkan Bozkir on the issue of Jammu and Kashmir. In contrast, it is expected that Mr. Shahid’s tenure, which will last until September 2022 while India’s tenure at the UN Security Council will last until December 2022, will see a period of smooth coordination between India and the Maldives at the UN.