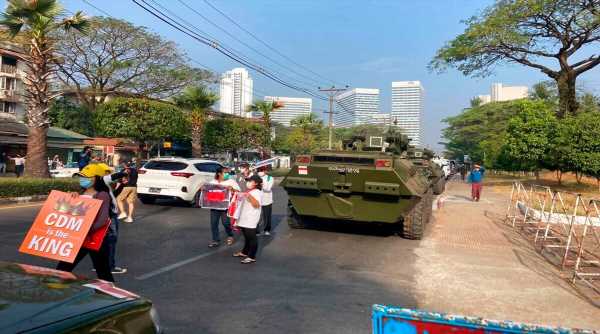 Hundreds of thousands of people have taken to the streets across the country for the past nine days to denounce the February 1 coup, which derailed the Southeast Asian country's tentative transition to democracy, and to call for Suu Kyi's release. Security forces in Myanmar deployed armoured vehicles in major cities on Monday two weeks after the military overthrew the elected government and detained its leader, Aung San Suu Kyi sparking the biggest protests in more than a decade.

Suu Kyi’s detention on charges of illegally importing six walkie-talkie radios is due to expire on Monday. Her lawyer, Khin Maung Zaw, could not be reached for comment on what was set to happen. The internet was resorted on Monday morning after an overnight suspension.

Hundreds of thousands of people have taken to the streets across the country for the past nine days to denounce the February 1 coup, which derailed the Southeast Asian country’s tentative transition to democracy, and to call for Suu Kyi’s release. The unrest has revived memories of bloody outbreaks of opposition to almost half a century of direct army rule, which ended when the military began a process of withdrawing from civilian politics in 2011.

On Sunday, police opened fire to disperse protesters at a power plant in northern Myanmar but violence in this month’s protests has been limited. As well as the demonstrations around the country, the military rulers are facing a strike by government workers, part of a civil disobedience movement that is crippling many of the functions of government. Soldiers were deployed to power plants in the northern state of Kachin, leading to a confrontation with demonstrators, some of whom said they believed the army intended to cut off the electricity. The security forces fired to disperse protesters outside one plant in the state capital, Myitkyina, footage broadcast live on Facebook showed, although it was not clear if they were using rubber bullets or live fire.

On Sunday evening, armoured vehicles appeared in the commercial capital of Yangon, Myitkyina and Sittwe, the capital of Rakhine state, the first large-scale rollout of such vehicles across the country since the coup. On Monday, more than a dozen police trucks with four water cannon vehicles were deployed near the Sule Pagoda in central Yangon, which has been one of the main protests sites in the commercial capital, as small groups of protesters began gathering outside the central bank and the Chinese embassy.

The government and army could not be reached for comment. 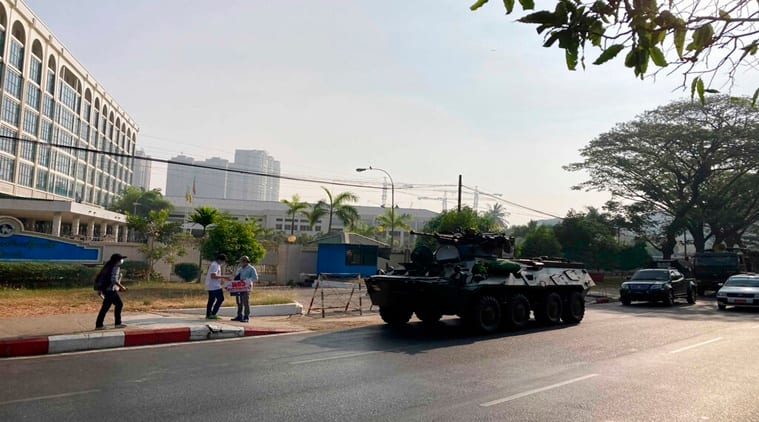 Shortly after midnight, residents reported an internet outage. All four telecommunications networks were inaccessible from about 1 a.m. on Monday (1830 GMT) until about 9 a.m., when connections were restored. In the early days after the coup, the internet was cut across the country. The army has been carrying out nightly arrests and on Saturday gave itself sweeping powers to detain people and search private property. On Sunday, it published penal code amendments aimed at stifling dissent. “It’s as if the generals have declared war on the people,” UN Special Rapporteur Tom Andrews said on Twitter.

“Late night raids; mounting arrests; more rights stripped away; another Internet shutdown; military convoys entering communities. These are signs of desperation. Attention generals: You WILL be held accountable.” Western embassies – from the European Union, Britain, Canada and 11 other nations – issued a statement late on Sunday calling on security forces to “refrain from violence against demonstrators and civilians, who are protesting the overthrow of their legitimate government”.

The amendments to the penal code set out a 20-year prison term for inciting hatred of the government or military or hindering the security forces engaged in preserving state stability.

Hindering the security forces carrying out their duties is punishable by seven years in prison while spreading fear, fake news or agitating against government employees gets three, according to the amendments posted on a military website.

In the latest sign of disruption by workers, the Department of Civil Aviation said in a statement many staff had stopped coming to work since Feb. 8, causing delays to international flights.

A pilot, who asked not to be identified for fear of retribution, said hundreds of staff from the department were striking. The junta has ordered civil servants to go back to work, threatening action.

Richard Horsey, a Myanmar-based analyst with the International Crisis Group, said the work of many government departments had effectively ground to a halt.

“This has the potential to also affect vital functions – the military can replace engineers and doctors, but not power grid controllers and central bankers,” he said.

At least 400 people have been detained since the coup, the monitoring group Assistance Association for Political Prisoners said.

Suu Kyi, 75, won the Nobel Peace Prize in 1991 for campaigning for democracy and spent nearly 15 years under house arrest.

Her party won a 2015 election and another on Nov. 8 but the military said the vote was marred by fraud. The electoral commission dismissed those accusations.