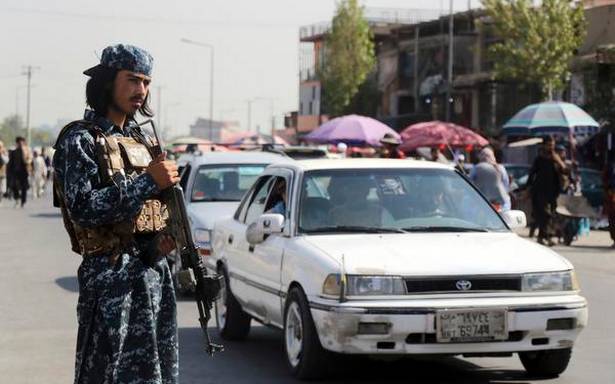 The U.S. has moved most of the 57,000 people it evacuated from Afghanistan to Qatar out of the Gulf state, with fewer than 1,400 still at the U.S. military base there, a U.S. general said on September 4

At least 17 people were killed in celebratory gunfire in Kabul, news agencies said on September 4, after Taliban sources said their fighters had seized control of Panjshir, the last province in Afghanistan holding out against the Islamist group. Leaders of opposition to the Taliban, however, have denied that the province has fallen.

A group of Afghan women have taken to streets demanding equal rights in the war-torn country.  Meanwhile, The Taliban have postponed the formation of a new government in Afghanistan for next week, their spokesman Zabiullah Mujahid said on September 4.

Here are the latest developments:

Iran’s president is calling for elections in Afghanistan to determine the future of the country, where he hopes peace will return after Western troops have left and the Taliban have seized control.

Speaking on state TV on September 4, Ebrahim Raisi said that the Afghan people should vote to determine their own government “as soon as possible.”

“A government should be established there which is elected by the votes and the will of the people," he said. -AP

‘Everything will be Okay’: ISI chief during visit to Afghanistan

Pakistan’s powerful intelligence chief Lieutenant General Faiz Hameed, who dashed to Kabul on an unannounced visit amidst efforts by the Taliban to finalise a government in Afghanistan, on September 4 expressed confidence that "everything will be okay" in the war-weary country.

Pakistan Prime Minister Imran Khan on September 4 said the world should engage with Afghanistan to address humanitarian needs and provide economic stability to prevent a refugee crisis in the war-torn country.

Mr. Khan spoke with Secretary General of the United Nations Antonio Guterres over telephone and the two leaders discussed the developments in Afghanistan, with a particular focus on the humanitarian situation.

According to a statement by the Prime Minister’s Office, Khan underscored the need for the international community to become more engaged with Afghanistan, according urgent priority to addressing the humanitarian needs and ensuring economic stability. -PTI

Govt should spell out before country its policy on Afghanistan, Taliban: Congress

The Congress on September 4 expressed concern over the "Afghanistan-Russia-Pakistan triangle" and asked the government to spell out before the country its policy on Afghanistan and the Taliban.

Congress spokesperson Gourav Vallabh alleged that the government is indulging in the "lowest level of diplomacy" as it is merely resorting to "disaster management".

Afghan female filmmakers who fled the Taliban are begging the world to not forget the Afghan people and to support its artists.

The women spoke at a panel discussion at the Venice Film Festival to warn that a country without culture will eventually lose its identity.

Sahraa Karimi, the first female president of the Afghan Film Organization, choked up in telling reporters all that had been lost after the Taliban completed their takeover of the country. -AP

Four days after announcing that the Indian government has held talks with the Taliban in Doha, Foreign Secretary Harshvardhan Shringla said that the Taliban thus far had been “reassuring” and “reasonable”, but stressed the government continues to approach the new regime in Kabul cautiously. His comments came as the Taliban continued to work on government formation ,which was delayed for the second day, amidst reports of differences between various factions.

“I think they [Taliban] have…made reassuring noises from their side. Our engagement with them has been limited, and  it’s not that we have a robust conversation. But for whatever conversations we’ve had so far, the Taliban seem to indicate that they will be reasonable in the way they handle things,” Mr. Shringla told journalists during his visit to Washington on Saturday, indicating that there had been more than one such engagement with the group.

Senior Congress leader Salman Khurshid on September 4 alleged that the Centre had initially turned a blind eye to the Afghan situation and the BJP is clueless about protecting India’s interest in the region.

Demanding that the government reveal what it discussed with the Taliban, Mr. Khurshid, a former external affairs minister, said the Congress would cooperate and support the Centre on the Afghanistan issue as it is a "matter of national security".

"The Centre initially turned a blind eye to the Afghan situation as if it was a problem only related to the U.S. and its allies. There are serious concerns about security and threat to our national interests due to the ongoing situation in Afghanistan. The BJP is clueless about protecting India’s interest in the region," he said while addressing a press conference. -PTI

Gen. Bajwa, in his meeting with Mr. Raab, discussed issues of mutual interest, regional security and the current situation in Afghanistan. -PTI

The United States intends to send Afghan evacuees who fail to clear initial screenings to the nation of Kosovo, which has agreed to house them for up to a year, a U.S. official told the Associated Press on September 4.

The U.S. plan for potentially long-term stays in a third country for Afghan evacuees whose cases require more processing is likely to face objections from refugee advocates. They complain that of a lack of transparency and uncertain legal jurisdiction in the Biden administration’s use of overseas transit sites to screen the roughly 120,000 evacuees from Taliban-held Afghanistan. -AP

Afghanistan a wake-up call for Europe on defence, leadership: France

The challenges to security emerging from the upheaval in Afghanistan should be a wake-up call for the European Union, French Finance Minister Bruno Le Maire said on September 4, urging the EU to be more ambitious on defence and on global leadership.

"Europe has to become No. 3 super-power besides China and the United States. Let’s open our eyes, we are facing threats and we cannot rely anymore on the protection of the United States," Mr. Le Maire told reporters during an annual business conference in Cernobbio on Lake Como.

"Afghanistan is a wake-up call," he said, adding Europe also faced security threats in the Middle East and in Africa. -REUTERS

Taliban and opposition forces were fighting on September 4 for control of the Panjshir Valley north of Kabul, the last province in Afghanistan holding out against the Islamist group, according to reports.

Taliban sources said on September 3 its fighters had taken the valley, although the resistance denied it had fallen.

The Taliban have so far issued no public declaration that they had taken the valley, which resisted their rule when they were last in power in Kabul from 1996 to 2001. -REUTERS

Taliban special forces in camouflage fired their weapons into the air on September 4, bringing an abrupt and frightening end to the latest protest march in the capital by Afghan women demanding equal rights from the new rulers.

Also on September 4, the chief of Pakistan’s powerful intelligence agency, which has an outsized influence on the Taliban, made a surprise visit to Kabul. -AP

Afghanistan could be catalyst for common EU migration policy -commissioner

Events in Afghanistan could be a catalyst for the European Union to forge a common migration policy, European Commissioner Margaritis Schinas said in a newspaper interview.

EU states are concerned that the Taliban takeover could trigger a replay of the crisis of 2015/16, when the arrival of more than a million migrants, predominantly from the Middle East, stretched security and welfare systems and fuelled support for far-right groups.

"It is true that we are now in a major crisis, but the EU did not cause the situation, yet we are once again called upon to be part of a solution," the Greek commissioner, whose brief includes migration policy, told Austrian daily Wiener Zeitung. -REUTERS