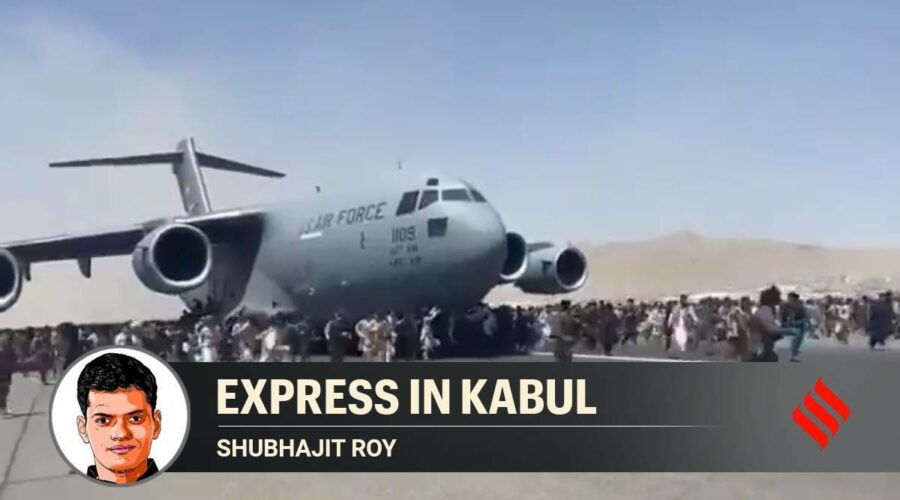 Each grainy image underlined the tragedy and despair that had engulfed a nation, abandoned by its main backers, the US and its Western allies, and overrun by the Taliban in a matter of days. NOTHING ILLUSTRATED more powerfully Kabul’s rapid descent to chaos than the chilling scenes from the Hamid Karzai International Airport that played out on screens across the world Monday.

They showed crowds surging to the tarmac in a desperate bid to flee with gunfire echoing in the background, many of them scrambling up a ladder to board a parked plane, several running alongside an American military aircraft taxiing for takeoff, some clambering on to its wheels —and at least two spiralling down from the skies.

Each grainy image underlined the tragedy and despair that had engulfed a nation, abandoned by its main backers, the US and its Western allies, and overrun by the Taliban in a matter of days.

As night fell, at least seven people had reportedly died in the chaos at the airport, even as the US, France, Germany and New Zealand said they wereworking to get their citizens out — US officials even urged Taliban leaders in Qatar to not interfere in evacuation operations.

Inside the airport building, meanwhile, there was helplessness, hopelessness and desperation laced with panic on each face, and one fervent wish — to get out of “Taliban Afghanistan”. “Kuchh nahin karega Taliban. Aap aaram se raho (The Taliban won’t do anything to you, stay calm),” a man in his 20s tried to assure this reporter. 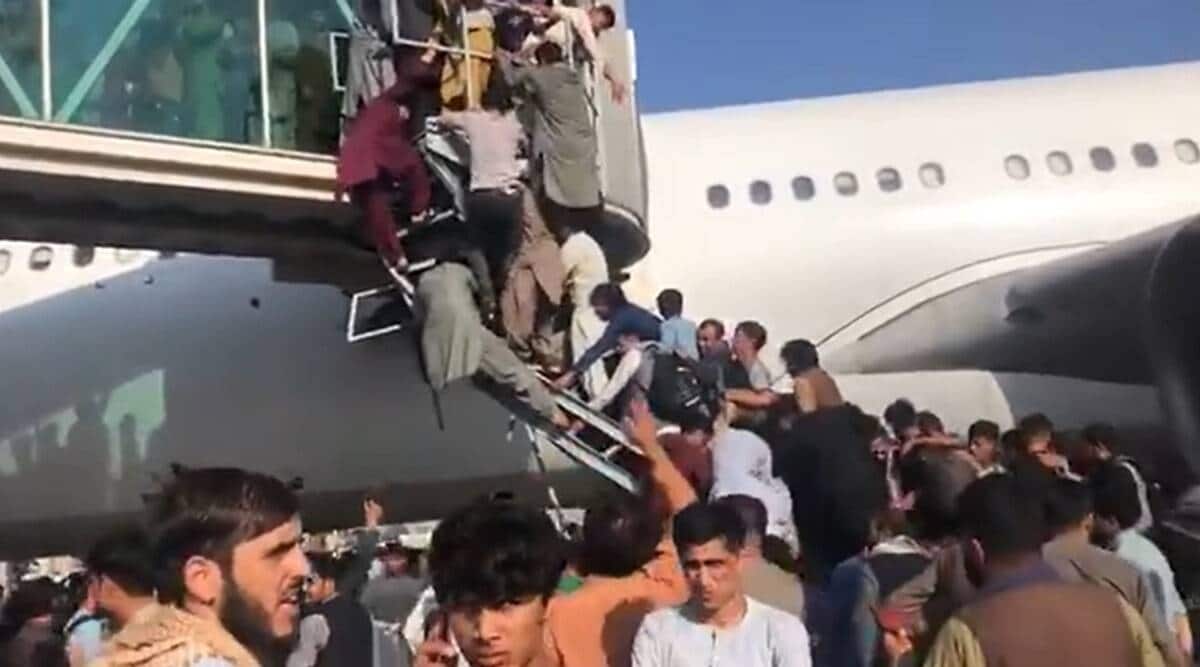 But then, the chaotic sequence of events from early Monday morning told a different story.

At about 4.25 am, a group of about 40-50 Taliban entered the Serena Hotel, most of them in their 20s and 30s. Soon, a small group of five started inspecting the facilities.

By now, a group of people, including this reporter, had left the hotel to reach the airport at about 4.50 am. The car stopped at the entrance of the airport, from where the terminal is a kilometre’s walk away.

It was still dark, but there was a steady stream of men, women and children, all walking with bags and essentials towards the airport. Outside the terminal was a roundabout with the words “I Love Kabul”, and six parked armoured vehicles manned by Taliban fighters to block access to the hundreds that had gathered. Occasionally, the Taliban would fire in the air to intimidate the crowd.

This scene played out on a loop till 6 am before the armoured vehicles finally let the crowds pass through. Inside, the terminal had been ransacked with broken glass littering the floor, and printers and bundles of A4 sheets looted from offices. There was chaos and mayhem all around.

Soon, the sound of gunfire echoed, with some reports claiming indiscriminate firing by the Taliban and rumours flying thick and fast of an exchange of fire between US and Taliban forces. US troops, meanwhile, fired in the air to stop people from trying to force their way onto a military aircraft.

Outside the airport, there was a palpable sense of fear as the traffic piled up and gun-toting Taliban stopped cars to check the occupants.

At the famed Green Zone, which houses the diplomatic enclave, the security ring was manned by the Taliban, and access to the embassies that were still functioning, including the Indian Embassy, was tightly controlled.

A Taliban guard at the entry gate said: “Till the Taliban structures come into place, we are not allowed to let people enter or exit the Green Zone.”

At the Indian embassy, officials hunkered down and watched the unfolding scenes on their TV sets while trying to establish channels of communication with the new regime. They had already prepared plans for evacuation, and were waiting for clearances.

All of them were bracing for a tense week ahead.

For this reporter, the one exchange that captured this tension took place at a check post. “Kahan jaana chahte ho?” asked a Taliban fighter. On hearing the response, he smiled menacingly and said: “India, ya India ke bahane Amreeka?”