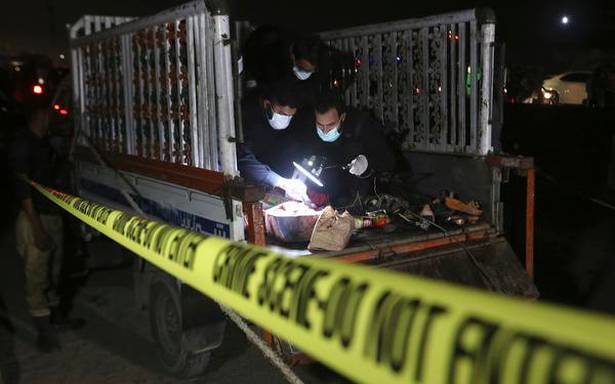 The death toll from an overnight grenade attack on a truck carrying women and children in Karachi rose to 12 on August 15.

Attackers targeted the truck on August 14 evening as it shuttled an extended family from a wedding ceremony in a western Karachi neighbourhood, killing nine people and wounding nine others.

Dr. Qarar Abbasi at the city’s main Dr. Ruth Pfau Civil Hospital said three of the injured died during treatment, raising the death toll to 12. The rest of the injured were in stable condition. He said seven women and five children were among the dead.

Raja Umar Khitab, a counterterrorism officer, said investigators have found pieces of a Russian made hand grenade from the scene near Mawach Goth. He told a local television station that evidence collected suggested culprits were chasing the truck from and threw the grenade in the truck crowded by women and children.

Javed Akbar Riaz, a senior police officer, said more than 20 women and young children from an extended family were riding in the truck, returning from a wedding ceremony when the attack happened.

No one has yet claimed the responsibility for the attack. The motive for the bombing was not known, though police were quick to rule out sectarian violence.

Karachi police chief Imran Yaqub Minhas after the incident denounced it as an “act of terrorism” on the country’s Independence Day, celebrated on August 14.

Also amid celebration of the Independence Day across the country, militants attacked a security patrol in the restive southwestern Baluchistan province, triggering a shootout that left three militants and a soldier dead near Shahrig in the Loralai district.

In a brief statement, the military said there was an exchange of gunfire after militants opened fire on a security vehicle and that two soldiers were also wounded during the exchange.

No one claimed responsibility for that attack as well, but Baluch separatist groups have often claimed such attacks in recent years.

Baluchistan has been the scene of frequent militant attacks and a long-running insurgency by groups seeking independence for the mineral- and gas-rich province bordering Iran and Afghanistan. The Pakistani Taliban also have a presence there.