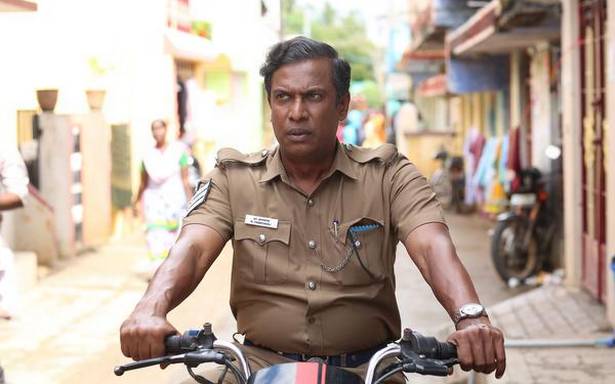 Cops have been portrayed in several ways in Tamil cinema, but most of them have been over-the-top. Think of the Singam franchise, where Suriya’s powerful punch sent half a dozen guys flying. Or the more recent Darbar that had Rajinikanth as a cop gone rogue.

Franklin Jacob’s Writer also features a cop, Thangaraj, as its protagonist, but he is far removed from the cinematic cop universe. When we first see Thangaraj (Samuthirakani), he’s seated in a police station in Thiruvembur, adjusting his glasses and reading the morning newspaper. An old Tamil film song ‘Kavalai Illatha Manithan’ plays in the background, probably pointing to the fact that Thangaraj is leading a life of contentment. But is he?

He is fighting for a cause – to establish a union among the police force, to ensure fair working hours – but Thangaraj is but a minor speck in the system. A tussle with his higher-ups ensures he is transferred to Chennai. Despite repeated instructions to stick to his job profile, Thangaraj gets inadvertedly caught in a case involving a college-going boy and other police officials. Can he, a humble writer, stand against the powers-that-be?

This might sound like a cliched storyline of a weak man taking on the system, but Writer packs in some solid material, especially in the second half. The biggest takeaway, of course, is the real-life-like depiction of the main characters. You could walk into any police station in your vicinity, and find characters like Thangaraj and company.

But that isn’t the real triumph of Writer. Much like Malayalam film Nayattu, which also brilliantly showcased three cops on the run, Writer weaves an engaging storyline around the protagonist. There’s a lot to like about Samuthirakani, who is very different from his earlier message-driven films. Caught in a system he detests but has gotten used to, he is sometimes clueless about what is really going on around him. Samuthirakani shines in these sequences; there’s a sequence involving simmering tension between him and another cop, in which he conveys so much without uttering a single word. Most of the supporting cast put in solid performances too; ‘Merku Thodarchi Malai’ Antony manages to infuse some humour in an otherwise serious subject, while Kavin Jay Babu impresses too.

There are minor missteps, like Devakumar (Hari Krishnan), the youngster pinned in the main case in the film, getting a flashback that is a tad longer than necessary. There are also a few pertinent points on caste that the film raises – no wonder since the film is produced by Pa Ranjith, well known for his fiery films and social statements. With Writer, debutant director Franklin Jacob joins the long list of exciting Tamil filmmakers to watch out for.