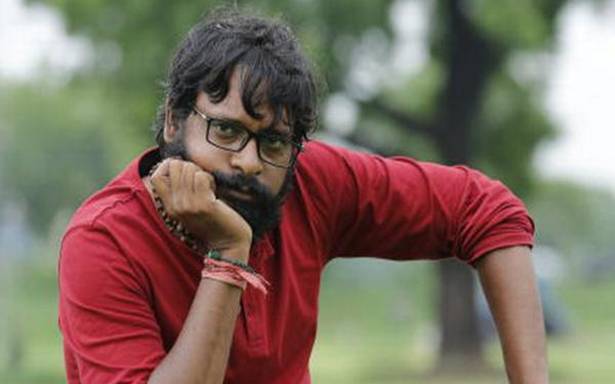 Raju Murugan never wanted to be a director.

As a youngster with a diploma to his name, cinema was never an option. Especially for someone supplementing his meagre income as a petty labourer by selling karadi bommai (stuffed bear toy).

Born in Abivirutheeswaram, Tiruvarur, Murugan’s journey to tinsel town makes for a fantastic story. He credits his older brother, Saravanan Rajendran, also a filmmaker (Mehandi Circus), for inspiring him to write.

“It was after my brother introduced me to classic Tamil literature that I developed a respect for the art of writing,” he adds.

When his writing took shape, Murugan needed a medium to express himself, and so, with the help of lyricist Yugabharathi, he took up a freelancer’s gig with a Tamil weekly.

Now 38, Murugan spent eight years of his life as a journalist. The job brought him in touch with many people.

One of them, director Lingusamy — whom he’d first met as an interviewer — introduced him to cinema. After serving as Lingusamy’s apprentice in Bheema (2008) and Paiyaa (2010), he set out on his own, finding form with Cuckoo (2014) before Joker (2016) fetched him a national award.

Up next for Murugan is Gypsy, which, he says will take audiences along on a journey never before seen in Tamil cinema.

True to its name, Gypsy documents the journey of a fictional nomadic singer, and how the people he meets during his travels turn him into a rebel.

While, as a community, gypsies are neglected and find little representation in mainstream arts, the decision to characterise a lead role based on them was inspired by one of Murugan’s essays, also titled ‘Gypsy’, which he serialised for a Tamil magazine.

“You can’t categorise a gypsy as belonging to a particular religion, language or caste,” says Murugan, adding that this film is a break from his routine because it is a commercial venture.

“It is a big film budget-wise, and because of the number of days we filmed it,” he says.

That remark coming from a filmmaker who made Joker, which questioned the rot in governance, is interesting.

The film’s trailer also makes it seem like Murugan has pushed the boundaries of criticism even further, with his target on this occasion being the politics of division and hate.

But he insists that no political inferences should be drawn.

“Gypsy is not about a particular political party. I look at cinema as a space to communicate with people, and my films have only dealt with social politics. This film speaks humanity, not [party] politics,” Murugan says.

What about the uncanny resemblance of the film’s supposed villain character to a certain Chief Minister?

“Look, how people perceive this film and its characters is upto them. The antagonist(s) in my film are those who spin politics out of the average person’s hunger, pain, love, caste, religion and language etc. It questions those who misuse power to drive a wedge between people,” he adds.

Another social critique in Gypsy is how society views and treats women.

In the trailer, Sunny Wayne is heard saying, “For these people, women are both their pride and insult in times of war, riots and fights.” It is a powerful dialogue in today’s context…

“Actually, [it is powerful] even from a historical context. It is not just the modern day politician [who is the problem]. Even kings took women as prisoners to claim moral victory over his opponent. We have examples of it in our mythology (The Ramayana). It has happened during the World Wars and in the Eelam issue,” he says.

A modern day iteration of this form of violence against women is the objectification of her body, adds Murugan.

“In the social media age, this happens in the form of uploading [nude] photos and videos,” he says, adding, “On the one hand, you keep sanctifying women, and on the flip side, you also take her through despicable situations. Why don’t we treat women as humans?”

While the film was not written with Jiiva in mind, casting the versatile actor for the lead role turned out well, says Murugan.

“[Jiiva] is someone who we can change to fit the role in whatever way we prefer. He is very adaptable that way,” he says.

Filming went on for 100 days from Nagore in Tamil Nadu to Varanasi, and from Kashmir to Goa.

“Every scene was shot live. There were no sets. It is a little difficult for any artiste to perform live on a daily basis,” Murugan continues. “[Jiiva] grew his hair, he learnt to play the guitar, and he even learnt to manage the dance horse. He was dedicated to the project,” he adds.

But shooting across the country was a logistical nightmare.

“I think our travel alone consumed a good portion of our budget,” he laughs, adding in conclusion that the expenditure was unavoidable.

“Even with our best efforts, this was the only way the movie could have been filmed.”